Mariah Carey at the 2017 VH1 Save the Music Foundation in a dress designed by Nile Cmylo photographed by Bryan Bedder, image by Getty Images 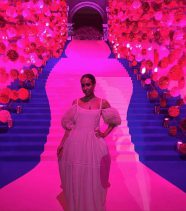 Chioma Nnadi at the 2017 Met Gala, image provided by Instagram 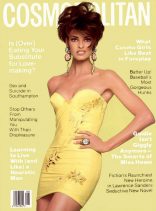 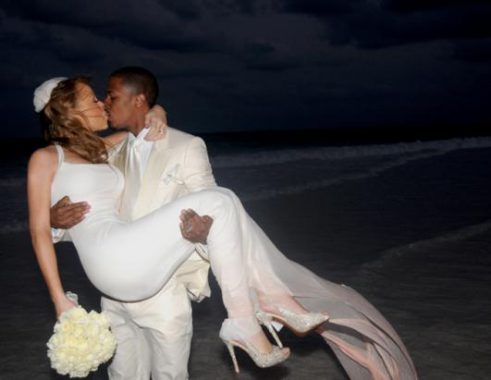 A hushed chanting melody of “Hey Jude” joins the smell of rose incense to accompany a crowd of mannequins that welcome me back to the Chelsea Hotel. The building, a monument for it’s past when “Courtney Love used to come on Sundays and hang out at the front desk…the [Red Hot] Chili Peppers had a room across the hall when they were making an album for six months,” hosting the age of the rockstar, as designer Nile Cmylo refers. In close corridors between work and leisure I enter into her world, an escape from the earth shaking change in US politics, and the building’s remodel.

Walking through the Hotel is like trespassing through a ghost town. The desolate infrastructure a result from a past of rowdy activity; similar to the spontaneous behaviors of Andy Warhol’s “Lonesome Cowboys,” now exists as a barren building stifled under a serial project of renovations. It’s time of wild creativity, the mecca of New York City soirée, now repressed. The lobby can be mistaken for an abandoned campsite, the hallways boarded with plastic coverings and wooden planks for doorways: all create an atmosphere hung-over from it’s past, now overlooked by many. However, with cocktail parties initiated as social gatherings that simultaneously preview her latest collection, Cmylo livens the building with guests, champagne and fashion culture. As resident of the hotel Cmylo consulted the renovations of her apartment two years ago. Decorating her space with 1966’s accents, she installed leopard printed tiling and preserved the gold leaf painting on her walls. The atmosphere inspirits an excitement Cmylo exemplifies in character and work; the apartment reinstates a blast from the past. Despite her efforts, she reminisces, “I don’t know if its ever going to be that cool again.”

I digress in wonder; the reality of US politics has kindled a unique spark of inspiration in Cmylo’s label Mermaidpunk tm. This season she says “I think it’s the president. I think I needed to be at my happy place, and my happy place is sewing.”

Sewing and hand dying all her designs inside her apartment shared with her cat Jezebel, a 9/11 rescue, sweet and friendly as a feline can be. She the color of toffee candy and soft as silk charmeuse invites herself into our conversation.

When I ask about her work life balance – a comment spoken from an overwhelming personal concern – she says “ I’m happiest when I’m working. It’s a great way to get older.” She describes her understanding of happiness, a contentment that overcomes a season of frustration and a moment of struggle. “The process [of finding reward in labor] is happiness.” The final effect keeps her designing. Her work (product) brings happiness, inspires a smile, as they are designed to make women feel comfortable in their own skin. The sewing machine, fabrics and current collection in her apartment reveal a union between vision, craft and talent.

Interrupted by the door bell, she jumps up to answer a sushi delivery, she refers to as “a little snack” for us while we talk about her fashion week habits and experience with Rafaella Hanley to collaboratively design a dress that Vogue.com Editor Chioma Nnadi would later wear to the 2017 Met Gala reception of the Rei Kawakubo/Commes des Garçons: Art of the In-Between Exhibition. The dress quickly became a pleasant sensation, in which the publication celebrated with a Barbie doll cake Nile baked. Perhaps even more seemly is her bond to Barbie, a central figure of inspiration for the designer. She explains, “ I’ve been sewing since I was three for Barbie… she was my first influence,” as she directs my attention to the showcase of Barbie dolls honored in their boxes beside us.

Cmylo offers insight from a career of one-of-a-kind designs. As she shares framed photos of Mariah Carrey, Ashley Graham and Gabourey Sidibe wearing her designs, these tangible memories of happiness honor her achievements. Other frames include The August 1990 Cosmopolitan cover of Linda Evangelista in Cmylo’s yellow mini dress, and the Wired Magazine October 2005 cover of Naomi Watts wearing a replicated costume design for the modern Peter Jackson King Kong film. It began with Grace Jones, “my first celebrity client; Richard [Bernstein] introduced me to her.”

But those are references to the past. Today, Nile Cmylo’s current collection includes: patent leather bustiers, a flash dress with floral appliqué, a full length design pleated with accents of lime green jersey, and a cropped apron layering over her classic one seam tank, a white body-con dress. Fashioning a collection of dresses, she struggles to title herself a dressmaker, for the title designer suggests a lack of craftsmanship. So she contemplates, “ but I’m not a dressmaker, because I won’t do somebody else’s vision.” Our afternoon conversation concludes as she reflects on her accomplished career. Her hustle, designing custom looks for clients’ interest in an ever-changing industry, Nile Cmylo stays afloat by staying true to her vision.