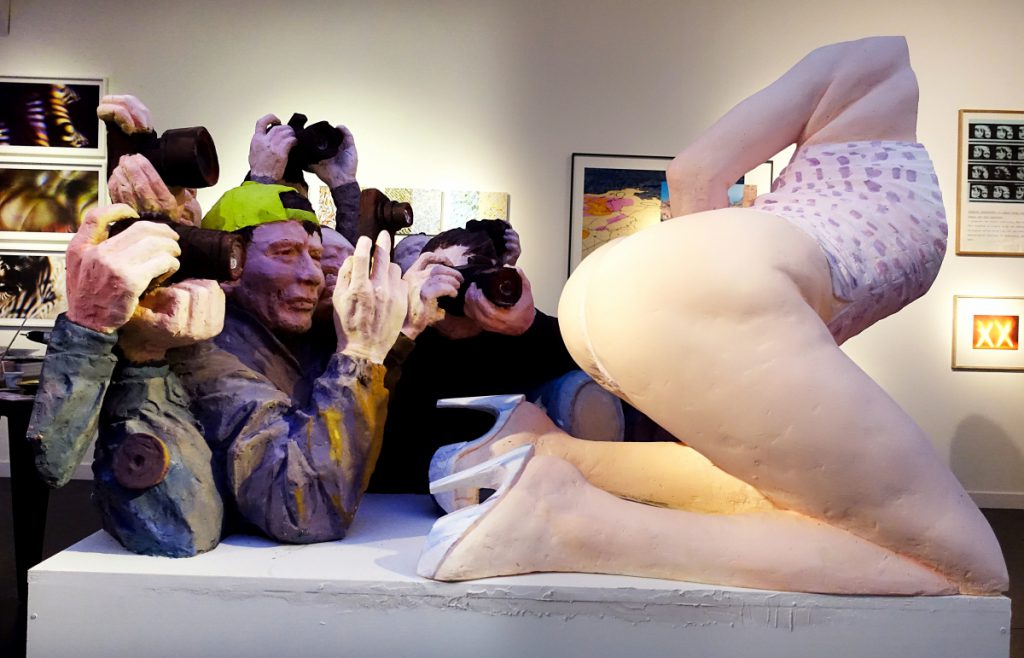 Exhibition on View at  22Visconti Gallery, Paris until November 19TH

A show curated by Anaid Demir , above Claude Lévèque 2016 “Its a Dream”

In part of the current Photo Saint-Germain festival and preview of Paris Photo, the exhibition SURFACES SANS CIBLE / AFTER PHOTOGRAPHY curated by Anaid Demir at 22 Visconti brings together a selection of artists working around the photographic medium and subject. The art critic explains her choices for this curatorial exercise with key words that suffice to intrigue and drive you to the very cool and chic Parisian space of the art and fashion quarterly Crash Magazine with a group show and title titillating sensations.

“Whether cut out, cut up, troubled and troubling, pixelated, projected, cropped, animated, manipulated, reprinted, ground up, or even dismembered, photography is a sensitive surface that offers up a virtually endless list of variations on its medium. It is precisely this photographic surface, which defies and exceeds all bounds, that forms the subject of the exhibition “Surfaces Sans Cible” – a title whose play on two French homophones conjures up the duality of photography as a surface both sensitive (sensible) and with no target (sans cible).”At a time when smartphones can project breathtaking images faster than they cast a shadow, when the web allows people to share infinite versions of these images across social media in a flash, when technology has democratized the art of photography to such a point that each one of us is just a click away from becoming an amateur photographer, “Surface Sans Cible” undertakes a timely inquiry into the status of the artist in today’s world.”

While Anaid Demir’s heart beats for mystery sensations and pop culture, from her novels “Les Derniers Jours de Jean Michel Basquiat” (2010 by Editions Anabet) or “Joconde Intime” (2012 Editions Léo Scheer),   it translates today into a posh list of artists from the controvertial and politically correct Gianni Motti with a poster from his presidential campaign in 2012 in the USA, a Wang Du spectacular plaster sculpture of  paparazzi  rushing to photograph the fat ass of a star… It also includes 3 panoramic images placed in a vertical tryptic by Frank Perrin which are elaborated with optical techniques and giving sensational results of images of essential and fetish body parts, foot, pubis, mouth…  A self-portrait of Nicolas Comment holding a star in his hand, and a lot of works involving collages and various tricks around photography, trompe l’oeil and other architectural overlaps… Claude Lévèque famous neon lights messages “It’s a Dream” resonates with what is probably the key piece of this show:  the work of Marie Maillard, a geometrical floor piece that could stay un-noticed, but if you are curious enough you’ll see that connected to an application she designed purposely, the piece comes to life in virtual space. Erupting on the screen of a phone or ipad, a mirage of 3D geometrical shapes are emerging from the flat piece. Here, it shows you that what you see is not only what it is and that the truth can lie elsewhere.

Show is Open until November 19th at 22 rue Visconti, Paris.