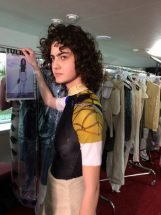 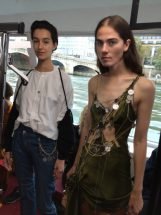 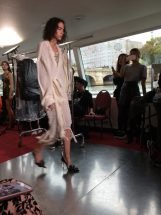 Risk taker Ottolinger chose to show the S/S 18 collection on the top deck of a boat, as it looked like it could rain you could either take your chances on the top deck or come down into the intimate dressing room and have a seat. I opted for that, it never rained and the show went on as expected. Christa Bosch and Cosima Gadient are the two women behind the Ottolinger brand. The two met in Switzerland at the Basel School of Design and decided to join forces. The two designers bounce ideas off of each other basing their design decisions on their personal taste and if they would wear it. The scarf, which seems like a trend so far this season, shows up here again on the catwalk. I think that it might be a good idea if the two of them would re-think the shoes, spindle high heels that seemed to be difficult for all but a few models to walk in.