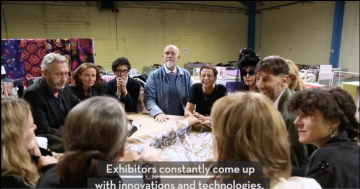 John Malkovich , President of the Jury for the 9 th PV Award

I had the great pleasure to interview this year’s President of the 9 th edition of the  PV Awards, John Malkovich, Actor-Director and Fashion Designer and, I might add,  a very humble man. He is a long time collector of textiles and has been buying textiles from Premiere Vision since February 2002. There could not have been a better choice for President of this year’s PV Awards. This is just part of our conversation, more about Malkovich and fashion films later. I also have to add the members of the jury were outstanding and what a pleasure this whole experience was. Thank you Premiere Vision.

DP: What is your history with Premiere Vision

JM: Well, I started doing a line with a young Italian guy that we produced in Japan called Uncle Kimono and we started in the end of 2001 and then there was a break between the first line that I did and the second one, Techno Bohemian, of about 2 or 3 years. The first fair I did was in February 2002 and since then I’ve come to most of them. Normally if I don’t come it is because I’m shooting or I just cannot come because I’m doing something live on stage or directing a play or something.

Lately I was shooting a film of Louis C.K. the comic which Louis wrote, directed, starred in called I Love You Daddy which Louis did everything including producing and editing. I was just in Toronto for the premiere of that at the festival in Toronto.

DP: So, what was it like being the President of the Jury for Blossom Premiere Vision?

JM: It was great I really, I’ve always liked to come to Premiere Vision and it was interesting to meet other people in the field which I don’t do that often. Because when I come here I’m always super busy unless I have a meeting with someone to talk about something super specific. Generally, I’m running around like a maniac picking fabrics each time. It was nice to get a first-hand look at what is out there this year and what people like. Because we all had 6-8 of our little stickers to say what we liked and I was very interested to see what people liked and what appealed to them. I kind of do everything myself so I don’t usually get to share things with others. I do work with Angelo Tarlazzi. He is my associate on the line but we have a tendency to discuss production and not that much about fabric.

DP: How did you go from acting, directing to designing? I know you do it all at the same time.

JM: I had studied costume and costumed a lot and worked a lot in fashion. I wrote and directed three fashion films for my friend Bella Freud. I worked as a model for Comme des Garcons, for Prada for lots of different people over the years and it is something that had always interested me and then this young Italian guy that had actually worked for a fabric company called Fedora, a quite successful one at that time, asked me if I would do a men’s line and I thought about it a lot because I knew a lot of designers and I knew that beyond the superfluous feigned glorious thing that people often think it is that in fact it was a lot of work and I kind of knew that so I was quite hesitant, and maybe I should have stayed hesitant, certainly my success may indicate that.. But it is something that interested me and I like doing it and I’ve learned a lot. As a long-time admirer of design, not just fashion but design and most especially fabric design. I really like doing it and I got started because somebody asked me.

DP: Did you ever create any of the textiles?

JM: I haven’t really created the textiles. There are so many great fabric designers out there that I don’t even have the time to see them all. I’ve done prints for my line I pretty much draw all of the scarves and I’ve done that for years. Outside of my own line I only once designed a print for Liberty London which was a great honour and probably the biggest honour of my career doing anything I guess. But you know that also requires a technical background that I’ll never have and there are so many great suppliers here that I use and that I love like, Warp & Weft, Marini & Cecconi, a lot of the Japanese, there such great suppliers I don’t think that I could come up with something that they haven’t already come up with.

I’ve had a background and I’ve worked with really great people and it is something that I really like doing and that really interests me and I’ve been a fabric collector for a long time. So, for me something like this is much more a delight than a chore.

THE JURY OF THE 9th PV AWARDS:

PRESIDENT OF THE JURY

Head of London College of Fashion

Pro Vice-Chancellor at University of the Arts London (UK)