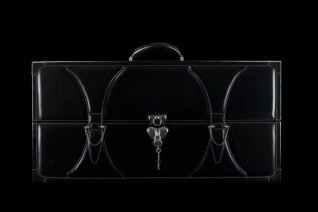 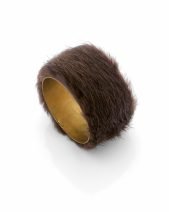 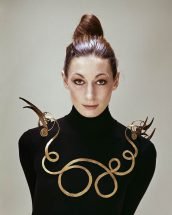 In Greek mythology Medusa was a monster, she had living venomous snakes in place of her hair. the story goes that if you looked at her hideous face you would turn to stone. Even when she was beheaded by the hero Perseus supposedly even her head alone could turn people to stone but when her head was given to the goddess Athena to place on her shield. The head of the Medusa appeared in the evil-averting device known as the Gorgoneion. Designing or being adorned by jewellery is an intense and intimate experience. Medusa Jewellery and Taboos gathers together 400 pieces of jewellery created by artists:(Anni Albers, Man Ray, Meret Oppenheim, Alexander Calder, Salvador Dali, Louise Bourgeois, Lucio Fontana, Niki de Saint Phalle, Fabrice Gygi, Thomas Hirschhorn, Danny McDonald, Sylvie Auvray…), avant-garde jewellery makers and designers (René Lalique, Suzanne Belperron, Line Vautrin, Art Smith, Tony Duquette, Bless, Nervous System…), contemporary jewellery makers (Gijs Bakker, Otto Künzli, Karl Fritsch, Dorothea Prühl, Seulgi Kwon, Sophie Hanagarth, Betony Vernon…) and also high end jewelers (Cartier, Van Cleef & Arpels, Victoire de Castellane, Buccellati…), as well as anonymous, more ancient or non-Western pieces (including prehistorical and medieval works, punk and rappers’ jewellery as well as costume jewellery etc ).

The exhibition is organized around four themes: Identity, Value, Body and Instruments. By using negative preconceptions as a starting point in order to deconstruct them and then reveal their underlying subversive and performative potential.

Fifteen works and installations by contemporary artists echo the themes of the various sections that question related issues of decoration and ornament and anchor the pieces with a broadened relationship to the body and the world.

In collaboration with Michèle Heuzé and Benjamin Lignel, scientific advisors