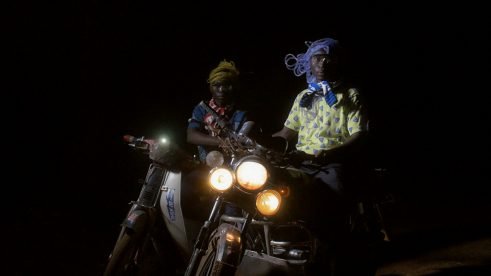 We’re starting a new portfolio within ASVOF and ASVOFF  reviewing fashion films once a week. Here is our first contribution. Gidi Gidi Bu Ugwu Eze ‘Unity is Strength’ is part of the ASVOFF 9 screening to be held at Nu Boyana Film Studios when we launch June 9, 10 and 11.

Over the past few years ASVOFF has screened films produced by KENZO and this season they produced a stellar one –  Gidi Gidi Bu Ugwu Eze ‘Unity is Strength’ directed by curator and filmmaker Akinola Davies Jr. The film is around its 2017 Summer men’s,  women’s and accessories collections with the notion of ‘ceremony’. The photographer Ruth Ossai teamed up with stylist Ibrahim Kamara in creating a rich and intoxicating view on Nigeria’s Nsukka population showing various ceremonies, rites and rituals within the indigenous Igbo communities of southern Nigeria.

The director and photographer are both UK-based Nigerians.

“It’s about celebrating young black Nigerian bodies and capturing them celebrating Igbo culture and traditions, showing that beauty is always present when there is  a commitment to the celebration of culture. This is what an inclusive pageant created by a community devoted to its own growth looks like. The concept celebrates the culture, traditions and beauty of three main festivals celebrated by the people of Nsukka: Onwa Eto, Onwa Ise and Onwa Esa.

It’s about Nigerians telling their own stories. It’s about the nuances of beauty in relation to their own community. Capturing our Nigerian community showing a commitment to a redefining and celebrating culture, showing the textures of a community in celebration of itself.

Family nurtures everything and your community is your extended family. Utilising one another and trusting in each other’s process.