This was my first time attending the Austrian Fashion Awards and Take Festival in Vienna, where the work of relevant and exciting designers was showcased. The Austrian Fashion Awards and Take Festival -powered by the Austrian Fashion Association and Creative Headz- help independent designers increase their potential through selected prizes, while giving them added visibility during the event. The winners this year included the likes of WENDY JIM, FEMME MAISON, RANI BAGERIA and MARKUS WERNITZNIG, proving that the local fashion scene is alive and well. The Festival, which stretched over a period of 5 days, took place in the striking Alte Post, conveniently located in Vienna’s 1st district. A clever mix of fashion shows, performances, installations, screenings and talks, the event gathered a mixed and cosmopolitan crowd, keen to discover new talent and experience fashion differently. Vienna has always been a haven for the avant-garde -whether it be art, fashion, design or architecture- a key notion that has shaped much of European fashion to this day. The installation showcasing the award winners on the first night was a highlight, as well as a series of unconventional shows and presentations, such as Jana Wieland’s eerie group of women wearing deconstructed clothes or Susa Kreuzberger’s refreshing casting, including women of different tastes, shapes and generations. This open and democratic spirit was highly welcome during an event, which blended disciplines under one single roof. This second edition of Take Festival made its point while managing to entertain and educate its guests at the same time, opening-up new visions, ideas and interactions between vibrant creative fields. 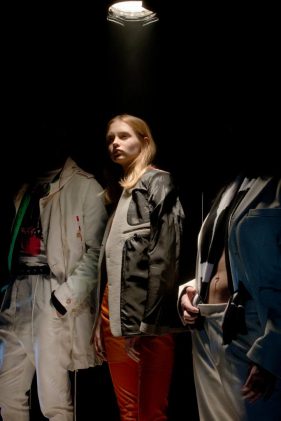