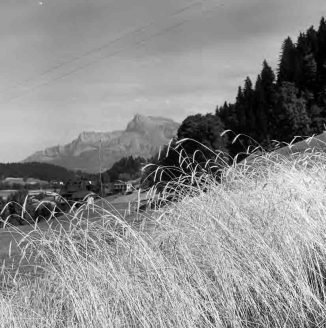 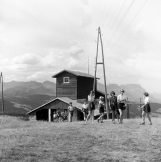 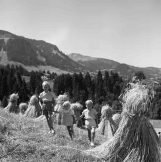 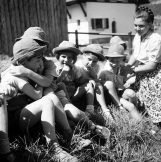 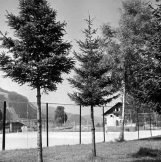 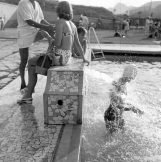 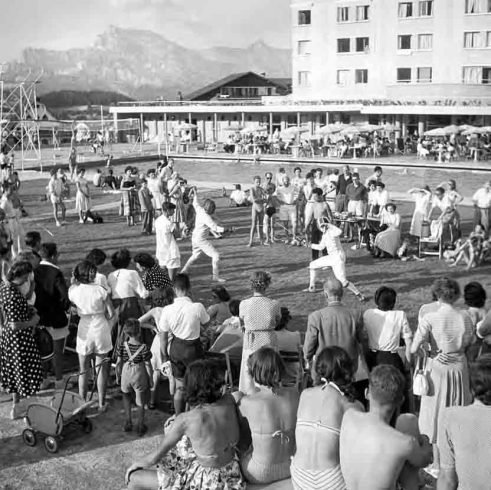 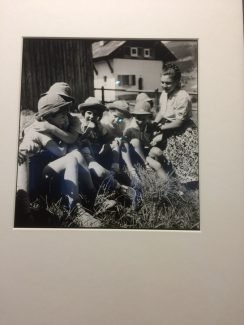 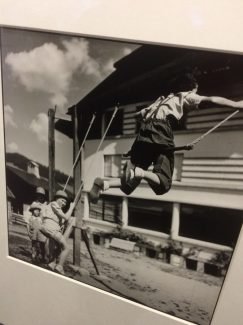 The black and white photographs were taken in Megève for two days during the summer of 1948. They bare witness to a return to simple pleasures, sports activities and walks in an alpine environment where, the grandeur of nature, philanthropy, the joy of life, remain the fundamental principles of this mythical place. The images of the first ski station of France, the Mont d’Arbois domain with its golf course, tennis courts, river fishing and aquatic competitions, restore freshness, a spirit of freedom and a lightness Our lives today constrain too often. In this series, which provokes emotion, there are also many children: childhood, which reflects a kind of carelessness, a community spirit, where vertigo and happiness are finally combined in this post-war period.

Founded by Baroness Noemie de Rothschild, Megève was set up in 1920 in a spirit of feminist emancipation and opposition to the rise of fascism. During the Second World War, Megève became one of the high places of resistance, sheltering over 2000 wandering children, including more than 500 Jewish children disseminated and hidden to escape Nazi persecution. Megève is now an internationally renowned destination, the city-station is the rendezvous of the aristocracy, the world of finance and business. The celebrities followed and the registers of the hotels still keep track of their passages. In these photographs, children whisper under the benevolent gaze of their teacher, where the natives will recognize theirs, others will see women in outfits sometimes “daring” or astonishing for the time, the elegance of noble golfers… These images restore the open, cheerful and enthusiastic spirit that characterizes the vitality of this period when life resumes its rights over the darkness of war.

The work of Gaston Karquel is part of an aesthetic field that comes from the great French photography of the last century. This committed and self-taught photographer was part of Alliance Photo, (the first photo agency in France, which later became Magnum), to name a few, he worked along with Cartier Bresson, Jacques Boucher, Emeric Feher … He was Jean Giono portraitist photographer of the work of Aristide Maillol, he also collaborated for many years with Le Corbusier, Charlotte Perriand and Jean Prouvé. Karquel’s work now has its place in the world’s largest collections, including the Georges Pompidou Center, the Musée des Arts Decoratifs and the Auer Foundation in Switzerland. Gaston Karquel is a great photographer as he is still unknown to the general public, we invite you to discover his vision of freedom through this series of unpublished photographs. All silver prints were made in the lab of  Diamantino.