It was a pleasure to see Helga Ruthner and Hermann Fankhauser return to the Paris calendar, with a refreshingly odd presentation. The Austrian duo excels at exploring the fine line between mundane and chic, trite and unusual, but they also have a sense of humor, something fashion has been lacking lately. Their ‘fountain models’ were amusing and provocative, as well as their print of rats running on a long sleeve dress. Their signature tailoring was as sharp as ever, but in baby pink corduroy, while uneven cowboy boots complemented the look. This idea of a twisted formality extended to other silhouettes, such as a full denim look, which looked as sleek as a suit. A green satin dress, looking proper and prim, was completely open in the back, recalling hospital gowns. The presentation gave guests food for thought, as well as desirable clothes to enhance any wardrobe. 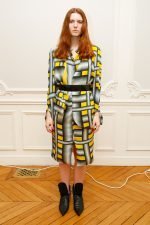