Within a few seasons showing in Paris, DROMe has become a reference for experimental and intricate leather garments, blending technological prowess with Italian savoir-faire. The brand’s latest show, which took place at the Musée d’Art Moderne, gave luxury a directional flair, approaching leather like fabric to create striking results. The fitted jacket -a leitmotiv on Paris runways- was proposed in stark black with draped sleeves and elegant gloves, while patchwork dresses mixed leather with velvet and silk, echoing the graphic beauty of abstract paintings. Shearling was also chic and multicolored, pushing a painterly vibe. While black and white appeared several times during the show, shades of purple and burgundy were intensely feminine, used on dresses and stylish separates. A full leather ensemble in patent red was a standout look, underlining the confident boldness of the Italian house. 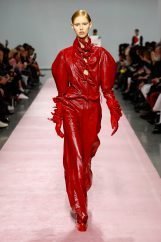 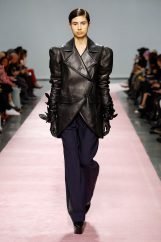 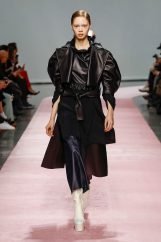