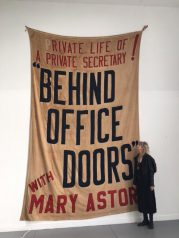 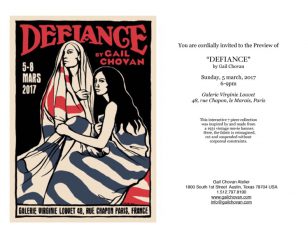 “DEFIANCE” will be unveiled in Paris, France on March 5th, 2017 at the Galerie Virginie Louvet. This show was inspired** by the wily Louise Bourgeois, the unflinching work of Kiki Smith, and the 1931 Mary Astor film “Behind Office Doors”.  The  pre-code film is about a working woman’s unrecognized and unheralded power. I am transforming verbal snippets – ‘Private’, ‘Life’, ‘Behind closed doors,’ among others – cut from the movie banner into frock coats, trousers, sheath dresses and blouses. They will be suspended on hard-coated mannequin forms then hung on hooks from the gallery walls.

“DEFIANCE” is about defying industry constraints, seasonal predictability, and the notion that fashion is ephemeral, disposable, and meant to be forgotten. It is about the de-humanization of clothing when the design is void of a person. The words of the movie banner seem disassociated from the advertising just as the clothing seems apart from human adornment.