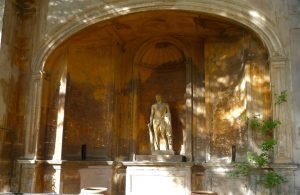 Situated in the area between the Aurelian Walls and the Felice aqueduct (near Termini), the small villa was built between 1741 and 1748 (the year in which it appeared on Nolli’s map of Rome) based, according to most historic documentation, on a project by Filippo Raguzzini. In 1913, the property was bought by Gustavo Dominici.