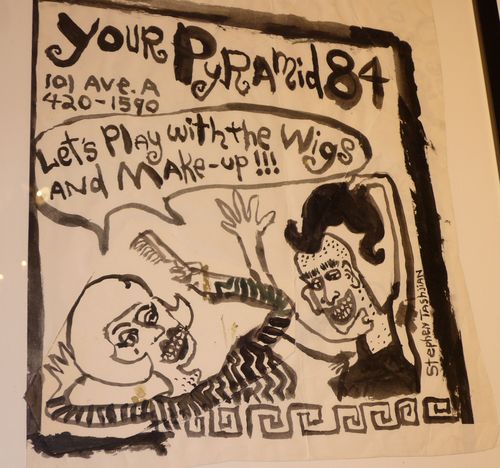 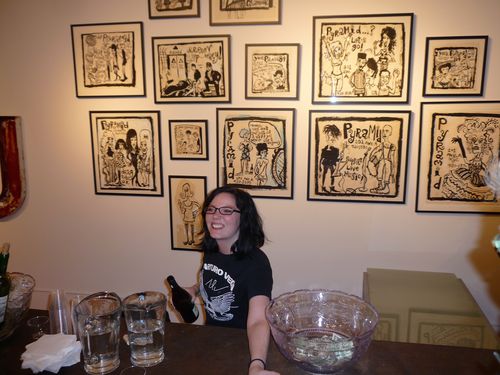 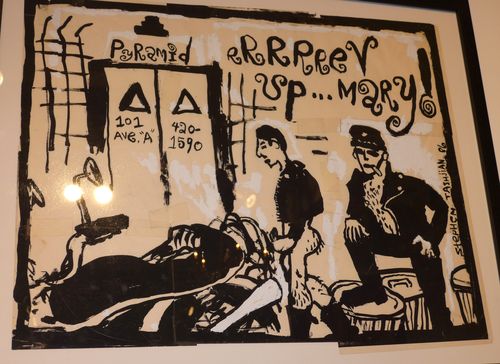 It was Old Home Week on October 17 in the East Village with “Secrets of the Great Pyramid: The Pyramid Cocktail Lounge as Cultural Laboratory”, an art show curated by Brian Butterick aka Hattie Hathaway. Even though I was nothing more than a wee wisp of a lad (carding at the door was unheard of in those days), I frequented the Pyramid Club often, from the mid-’80s to the mid-’90s. On my first visit, circa 1985, I felt that I had entered a secret society. There were sinister, mohawked mannequins propped up in the corners. Punky, decidedly unglamorous drag queens danced and stalked on top of the bar (if you weren’t careful while reaching for your screwdriver—everyone drank screwdrivers in those days—you ended up with a spiked-heel-inflicted stigmata on your hand.)

The tiny dance floor was usually jammed with gays, punks, junkies, artists, Eurotrash, stockbrokers and professional lushes, grooving to everything from punk to disco to acid house to the requisite Madonna hit, way before we all became embarrassed of her. The shows in the backroom (where the walls were festooned with TABBOO!’s quirky, curly-q artwork) were gloriously messy, irreverent, unrehearsed spectacles of ratty wigs, metallic polyester schmattas, and sharp-tongued satires of contemporary culture, including mainstream gay culture. At once bawdily silly and seriously subversive, the Dadaists would’ve been pea-green with envy.

By 1989, Sunday was the night to be there, when Hattie Hathaway and Hapi Phace hosted the gay night Whispers. In between hilarious performances by local drag stars (including, sometimes, pre-fame RuPaul), Hattie and Hapi would tell aggressively bad, un-PC jokes (“I’m from Queens.” “Really? I’m from normal parents.”) And then, like clockwork, we would once again endure Hapi’s dance of the 7 veils, submitting to the sight of “her” Venus of Willendorf naked magnificence and malevolence. Afterwards, with a dozen screwdrivers under our belts, we would throw ourselves at each other on the dance floor to “Like a Prayer.”

This exhibition, which runs until November 7, is “more than a reunion, a retrospective, or a forced march through niche history. Secrets Of the Great Pyramid shows how a simple cultural laboratory continues to resonate in Post-Millennial America. Featured in the three-week exhibition will be a recreation of the legendary Pyramid bar; artwork and visuals from deceased trailblazers and working artists embraced by the Pyramid; ephemera and ancient artifacts; and a veritable three-ring circus of performances and other events that spotlight the enduring spirit of the club.

On December 10, 1981, Ronald Reagan had been president for less than a year when a group of New York art-school flunk-outs threw a party at a small Polish/Ukrainian dive bar on Avenue A in New York’s East Village. Ed Koch was mayor, the East Village was in flames, the street drug trade was rampant, and rents were cheap. First Avenue was viewed as the farthest east any sane person would dare to tread. The bar was called the Pyramid Cocktail Lounge; the party, On the Range. Within a few weeks, a simple excuse to frolic had transformed into a seven-nights-a-week venue—an epicenter of art, music, performance, and social change.” —Brian Butterick 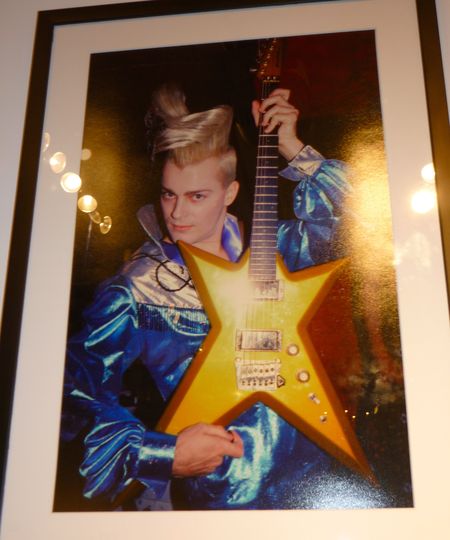 The late, great, beautiful John Sex. I remember when they used to play his music video “Hustle with My Muscle” on cable TV and his shows at Wigstock in Tompkins Square Park were a highlight of the event. He died too young, at age 34 from AIDS, in 1990. I adored his partner, Wendy Wild, who was also a regular performer at the Pyramid and King Tut’s Wah Wah Hut across the street. She often worked the coat check on Sunday nights and I would arrive early so I could hang out and chat with her before the show began. She appeared on my cable show Glennda and Friends at Wigstock in 1995, held at the piers, and left this world in 1996. 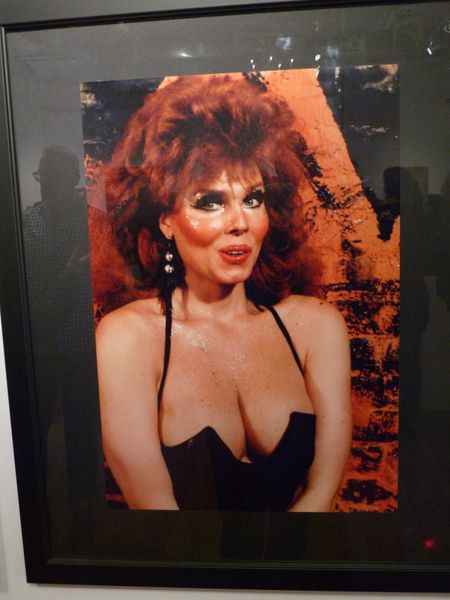 Transgendered supernova International Chrysis, another angel now in heaven. I wrote about seeing her perform at The World in the introduction of my book, Confessions From the Velvet Ropes. 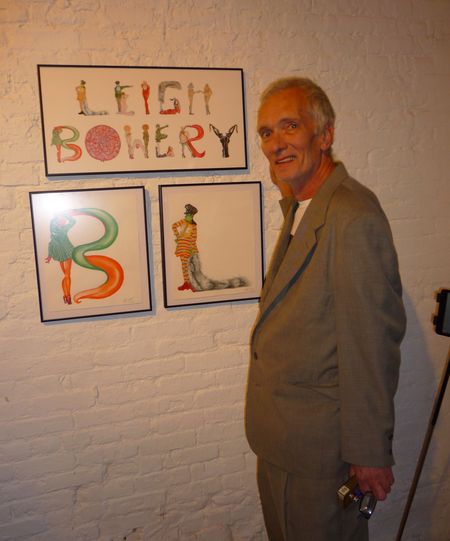 The man of the hour, Brian Butterick, with work by Connie Fleming aka Connie Girl. 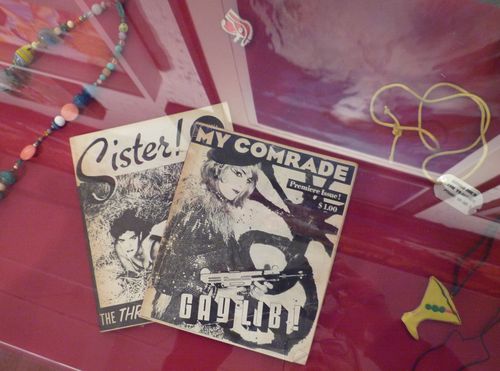 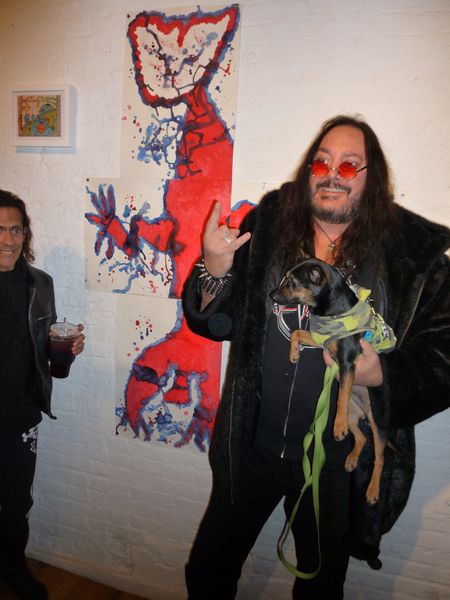 Scot Wright and his doggie pose beside Scot’s piece for the show. Scot is a legendary NYC doorman…I remember him from the Pyramid in the late ’80s, and then Barracuda in Chelsea and now I think he still works the door at Eastern Bloc in the East Village. I rarely go to gay bars these days, but when I do go, I go there. Of course, I’m sooooo old (“How old are you?”) that not only do I remember when that space was the Wonder Bar, I remember when it was a quirky pansexual performance space and rock ‘n’ roll bar called Chameleon. 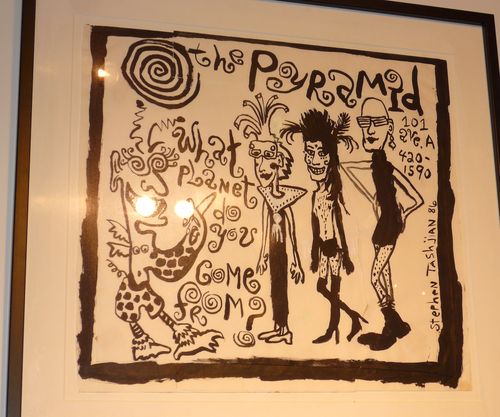 Pyramid Club ad by TABBOO! aka Stephen Tashjian. That’s an illustration of the great Dean Johnson on the right, also gone from this world now, of Rock ‘N’ Roll Fag Bar at the World fame. 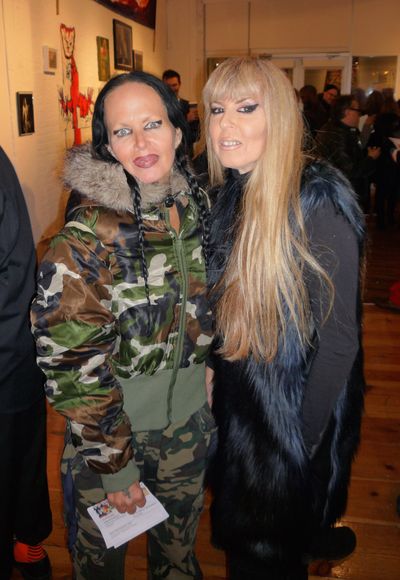 Kembra Pfahler of the Voluptuous Horror of Karen Black. Back in the ’90s, my drag queen alter ego, Glennda Orgasm use to have a cameo in Karen Black shows: my job was to break paint-filled eggs on Kembra’s vulva as she stood on her head. 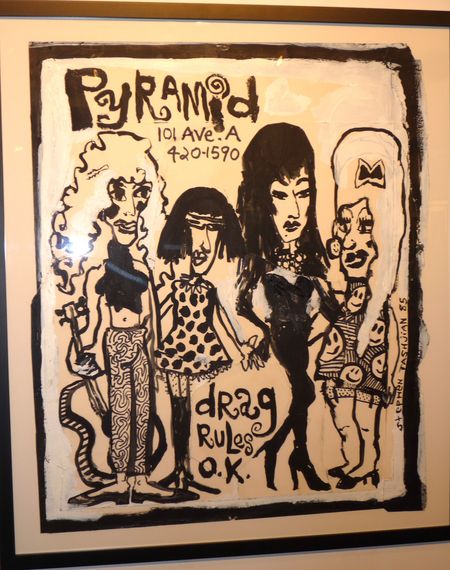 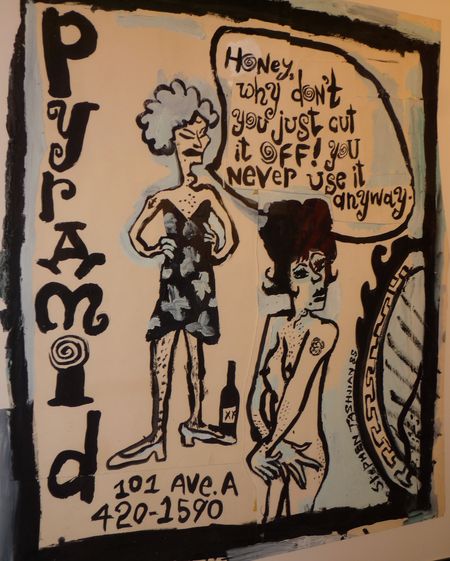 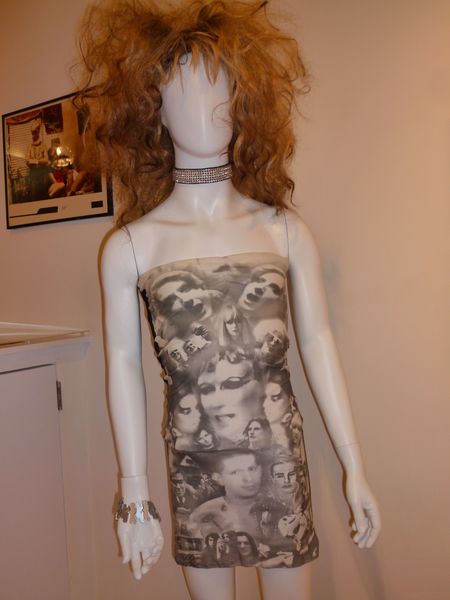 Marjan Moghaddam Screen Cap Dress from her video about the Pyramid Club, “Drag Queens, Skinheads, and Some Girls.” 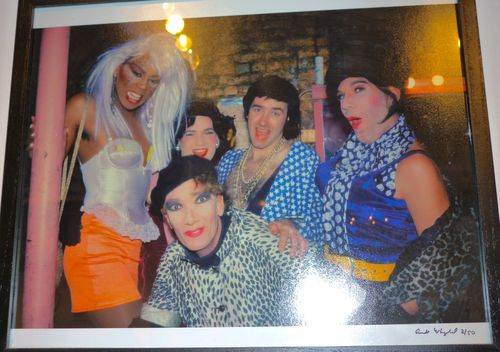 When they were young: RuPaul, Hattie Hathaway (in animal print), Larry Tee and Hapi Phace. 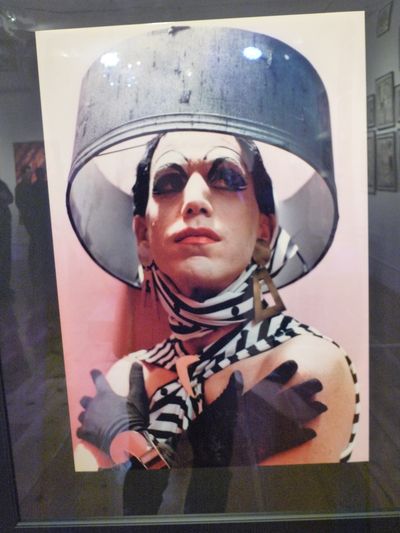 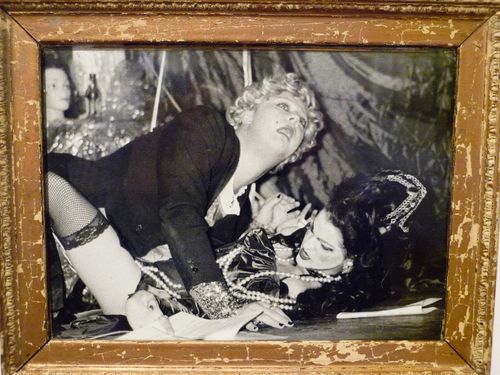 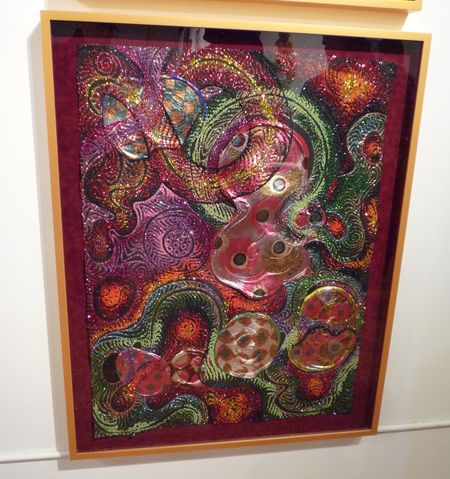 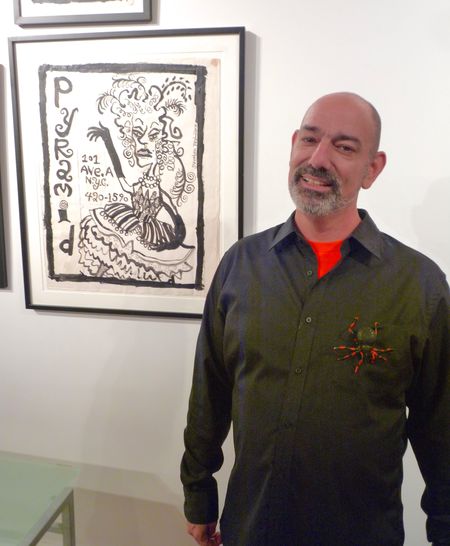 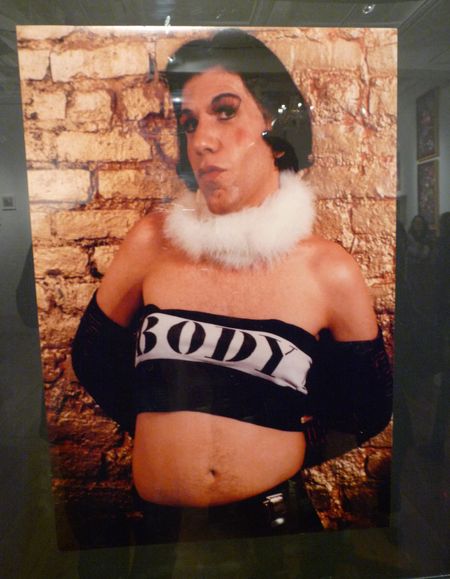 Belly up to the bar! We can’t get enough of Hapi Phace. 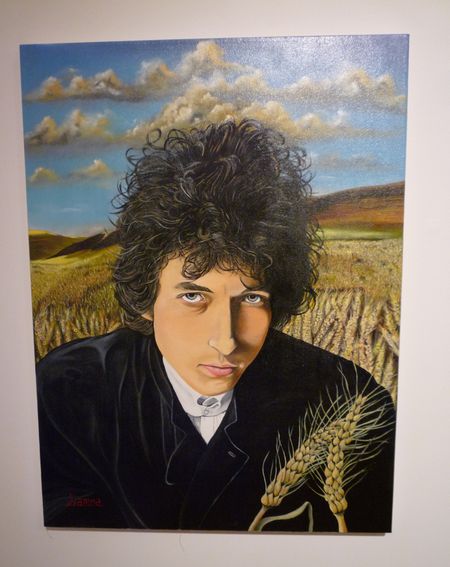 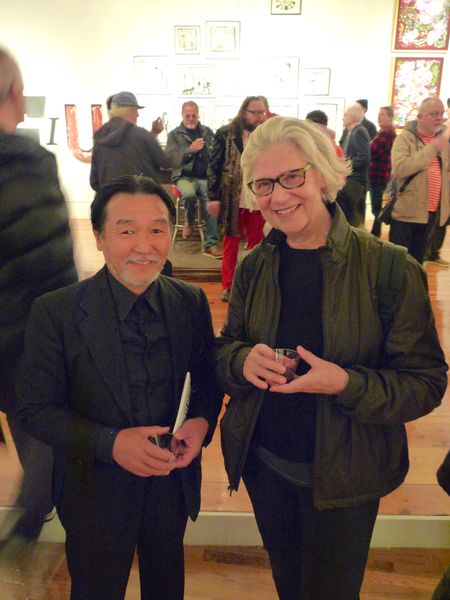 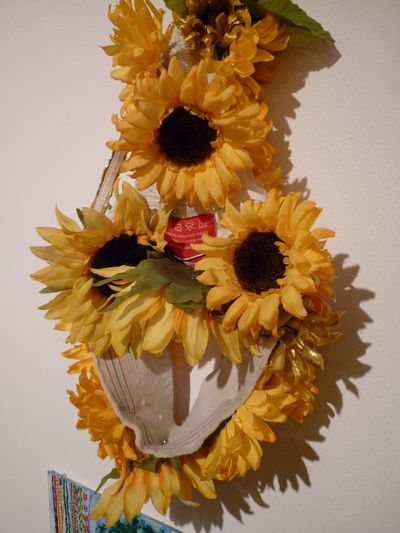 A jockstrap festooned with sunflowers by Peter Cramer. 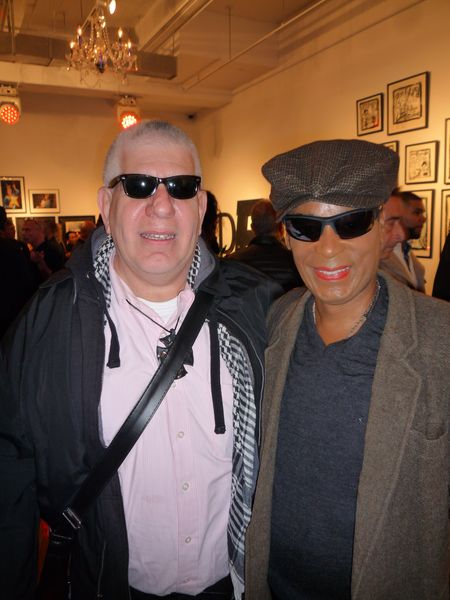