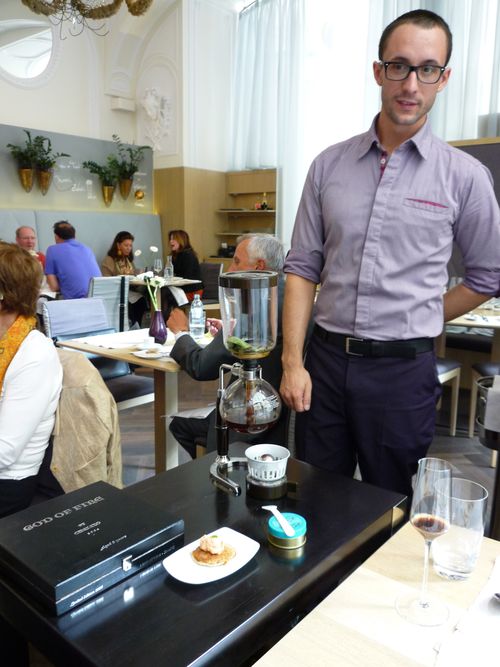 Above: Our handsome waiter wheeled out what looked like a chemistry set. It turned out to be a Japanese coffee pot.

A few weeks ago, while attending MQ Vienna Fashion Week, Carole Pope and I were invited to experience an epic, haute-couture vegetarian lunch at a restaurant called Tian (“heaven” in Chinese), located right in the heart of Vienna. I had the pleasure of having lunch there last year, but this time they pulled out all the stops–and presented us with a 5+-course meal that is usually only served during dinner time.

At Tian, their primary aim is “to offer their guests a healthy, fascinating, varied and extremely tasty vegetarian menu. We would like to introduce our customers to a world of exciting meat-free favours, which they never would have thought possible.” Mission accomplished!

Tian, which opened in 2010, sources their ingredients from their own growers and from producers they trust: mainly from the region, but also from their own organic market garden in Carinthia, in the south of Austria. All the water they use on the premises has been revitalized using the GRANDER process–an energy-efficient eco-water system developed by Austrian Johann Grander.

Tian’s chef, Paul Ivic, posesses an in-depth knowledge of the chemical composition of raw natural ingredients. Tian’s owner, Christian Halper, sent a Viennese engineer on an expedition in 2005 to places said to be the homes of some of the oldest people on earth. “When we tried them out, we realized the dishes were wholesome but not exactly the right match for European tastes.” Tian’s team combined this knowledge with European traditions of cuisine and infused it with an avant-garde outlook. The result is vegetarian food like you’ve never experienced it before. 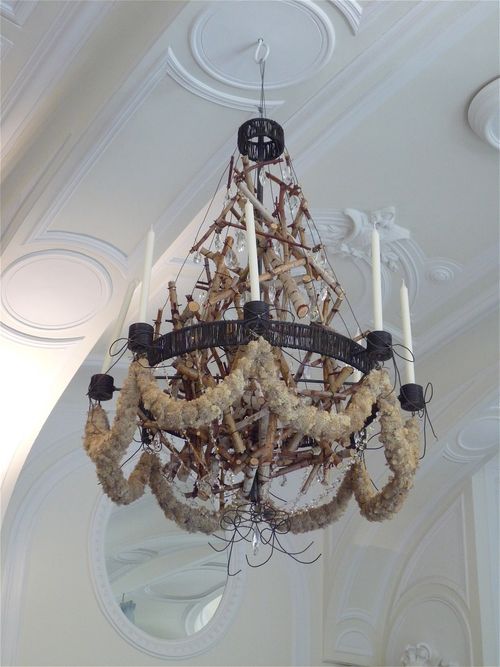 Tian’s show-stopping chandeliers are composed of wood, crystal and wire. 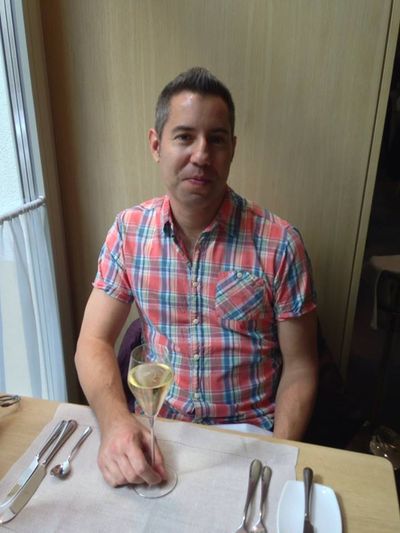 Lunch, or at least my version of the lunch, started out with the best way to begin one’s afternoon: Champagne. But instead of following this with a hellish descent into gout-inducing fatty dead animals, we embarked on an enlightened journey into green, greener and greenest pastures. 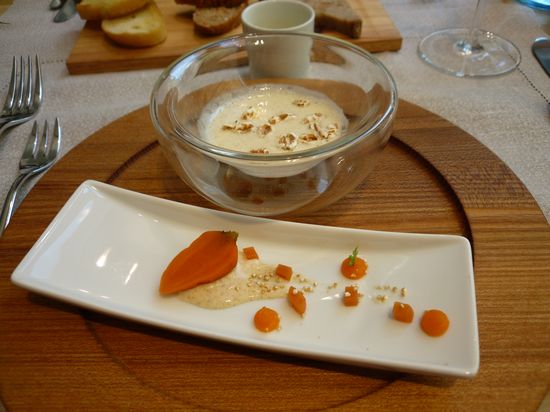 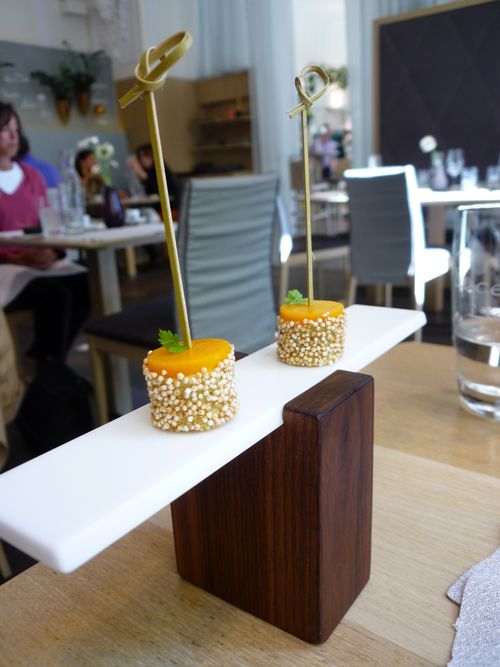 One of our mouth-watering starters: mangoes covered in amarant seeds. 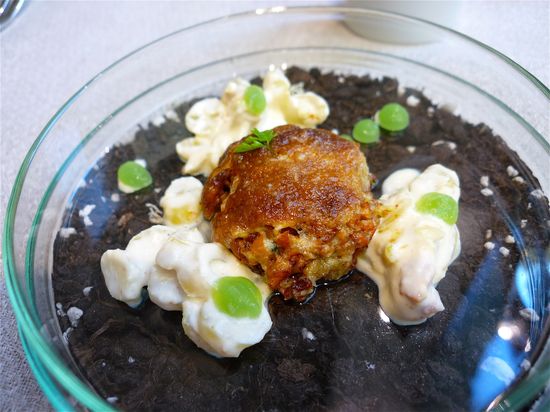 Chanterelle tartare served in a petri dish over organic earth. 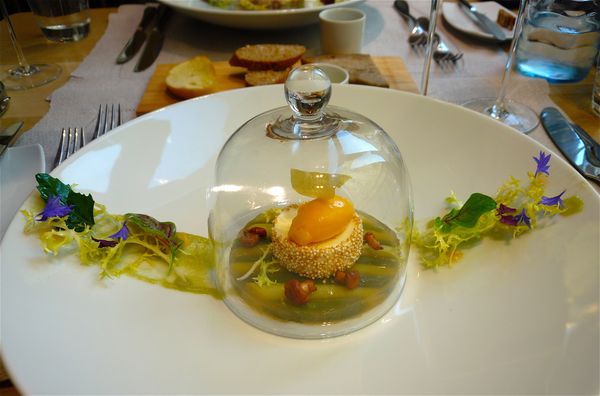 This was rather spectacular: a salad of yellow and green beans, goat cheese, sorbet and chanterelles served under a bell jar filled with pepper smoke. 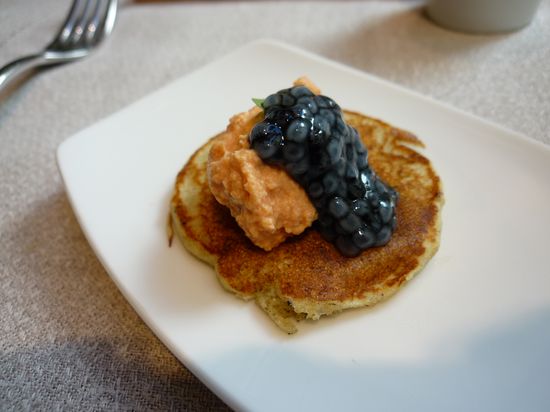 A blini topped with “caviar” that is politically correct on so many levels. It’s definitely not Russian and the “caviar eggs” are rendered from basil seeds. Take that, Putin! 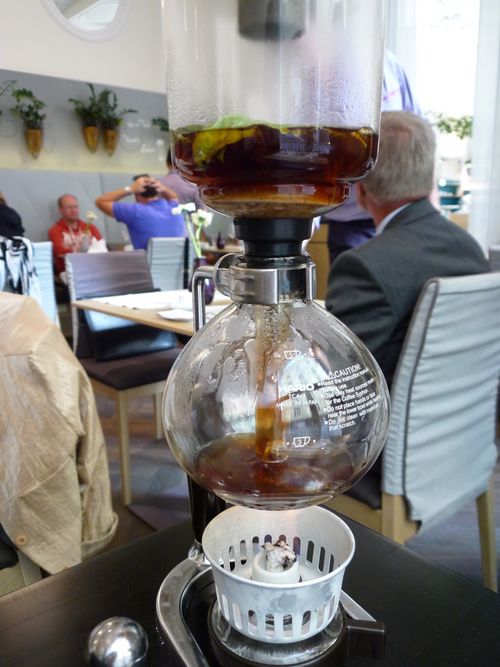 The lunch took on a performative quality when the waiter wheeled out a Japanese coffee pot and conjured up a tea of tomato and basil…. 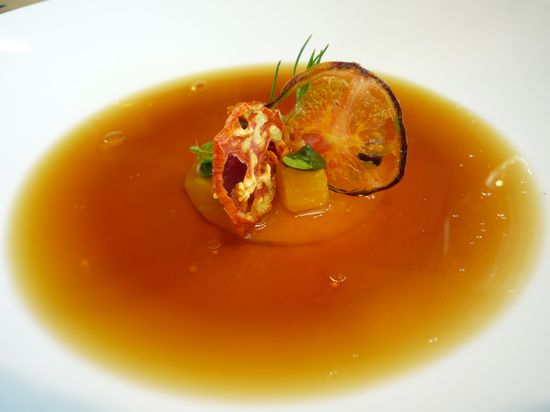 …which was served as a lovely, mesmerizing soup. 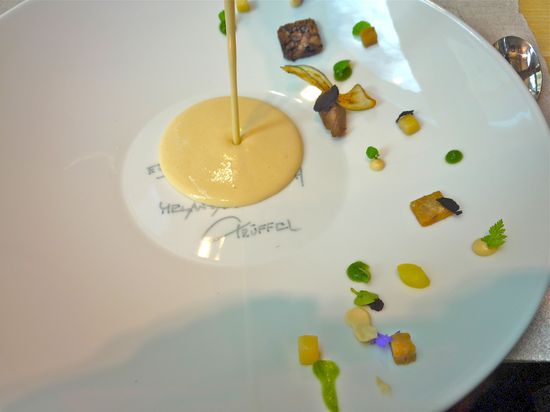 Carole was treated to a different soup. I think it was a squash soup with an artistic array of tiny vegetables. 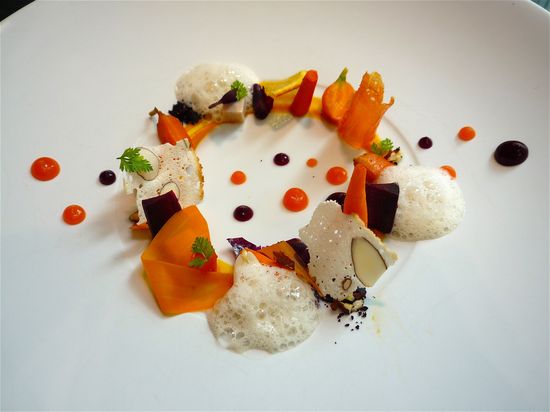 Another salad that almost belongs in an art gallery instead of one’s stomach! 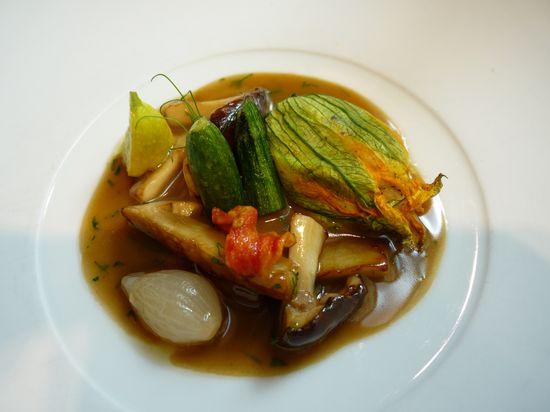 More food performance: a corn pate molded into the shape of a corn cob served on a piece of slate and toasted before my eyes with a creme brulee torch by an exquisite little Japanese woman. Enchanting! 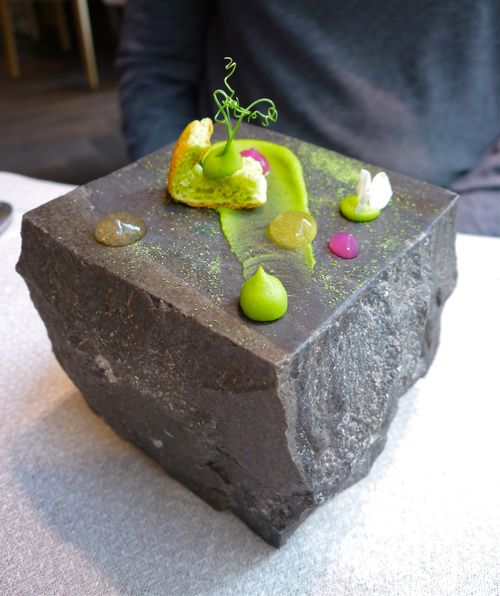 Carole enjoyed a futuristic “salad” served on a miniature Rock of Gibratlar that might be a repurposed chunk of meteorite from the Crab Nebula. 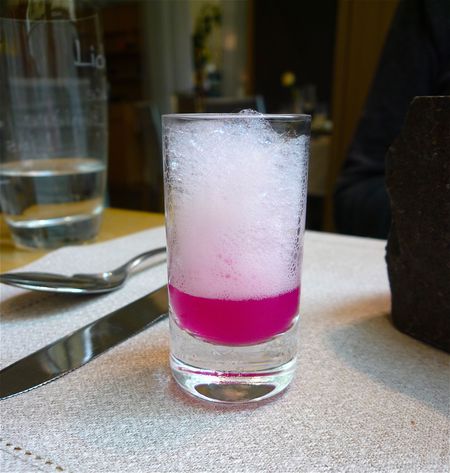 Some palate-cleansing beet foam was served between two of the courses. 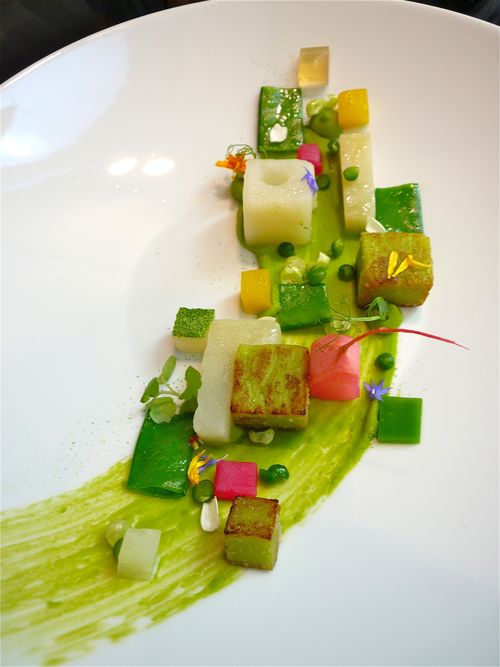 The dizzying array of dishes kept soaring higher and higher to new artistic heights. While this salad resembles a Cubist painting, it’s meant to mimic a game of Tetris. Bravissimo! 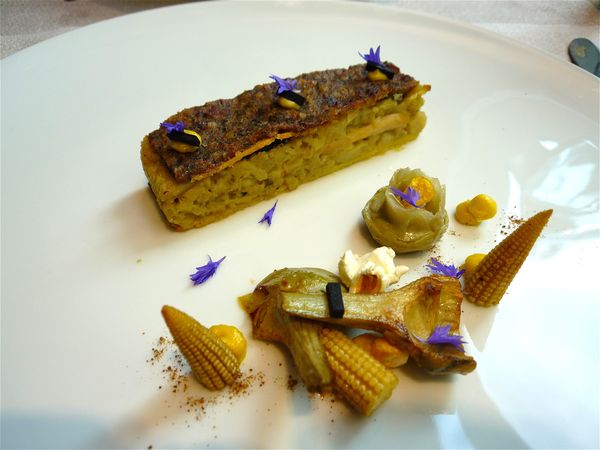 This dish was perfect for the early-fall weather in Vienna: a hash brown of artichoke and young corn, served with artichokes and young corn in a whisper of a cabernet sauvingon sauce. 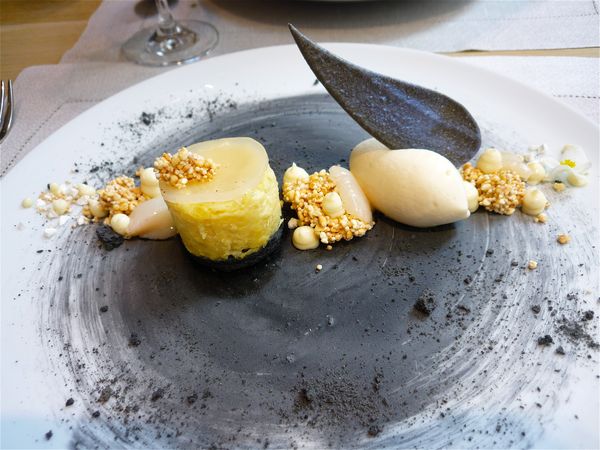 My dessert made me think of a selection of Anna Piaggi’s hats that been plopped down on a starchitecture construction site. It’s actually meant to recall the Milky Way Galaxy and consisted of delicacies created from lychees and white chocolate. Devastatingly delicious! 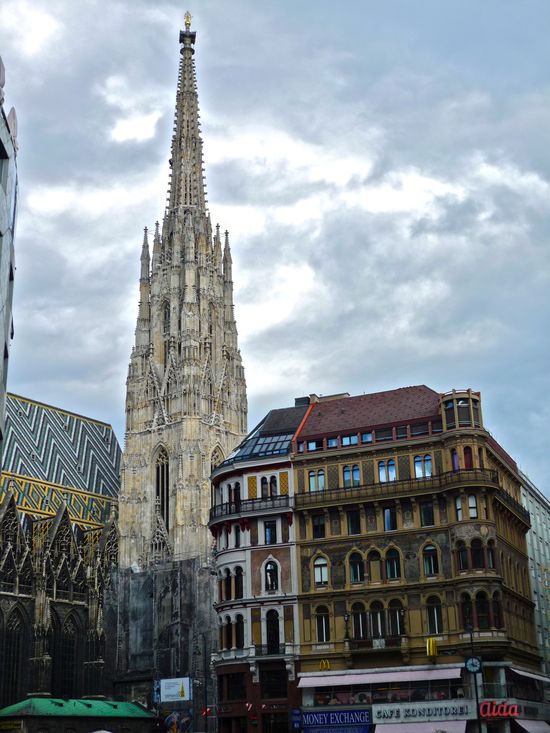 We emerged from our futuristic lunch to wander through Vienna’s fairy-tale-like past.