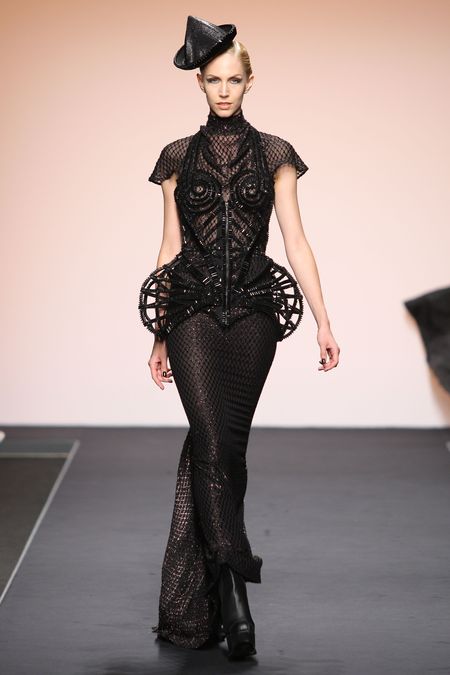 Because the Paris Couture is not my beat, I was over the moon to be able to attend the Jean Paul Gaultier show at the latest edition of Alta Roma Alta Moda in the Eternal City. My delight was shared by some of the Romans in attendance as this was also their first Gaultier show. Our excitement was buoyed by Monsieur Gaultier’s palpable enthusiasm for Rome (Susan Sabet and I dined near him and Silvia Fendi at Das Bolognese where the legendary couturier was plowing through plates of pasta with gusto) and his eternally upbeat demeanor.

This was Monsieur Gaultier’s first show in Rome, and he had this to say to MFFashion:

“I’ve always thought Rome was a beautiful and poetic city and had been thinking about doing a show here for a while. Last year in November I came back to Rome for the Luxury Summit that Suzy Menkes organized here, and we began talking about this project with Silvia Venturini Fendi…et voilà. A homage to Italy, a country I’m strongly bonded to, I produce my RTW collections here.

The show was made up of 50 pieces all haute couture from the first S/S in 1997 to the last one F/W 2013/14 (4 pieces) which I presented a few days ago in Paris including a few menswear looks. An anthology to tell about my world, a portrait of my haute couture aesthetics.” Now, this is just what I need for my next sundowner in the Sahara…a fur-trimmed canopy cover up! Absolutely divine. By the way, the Rome version of PETA, Animalisti Italiani, was protesting outside, setting off smoke bombs and running around naked before and during the show. But I didn’t notice–I was too busy being glamorous! JPG was very happy to be in Rome–understandably! Amanda Lear! Bellissima! I met Ms. Lear at the Italian Vogue dinner afterwards at the Galleria Borghese (a stunning affair–report to come).

Paloma’s counting her paintings
the models of Zoli flirting.

There was David Bowie on the soundtrack at this show (“Ashes to Ashes”, “Space Oddity”) and some of the looks from Gaultier’s Fall 2013 couture collection were named after Bowie songs. This, of course, brought to my mind this hallucinogenic video starring Bowie and Amanda Lear. A brief, yet seismic moment in ’70s pop culture!