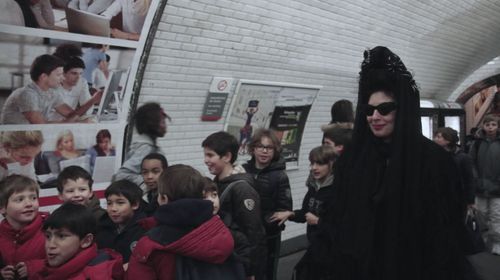 The past few days I've been the protagonist in a documentary  for five  Video Design and Fashion Communication students at Istituto Europeo di Design IED in Milan. I know their professor, Alessandro Jumbo Manfredini.

They are shooting a short documentary about and with me. The focus of director Enrico Ortu is of course fashion film and his team includes Carlotta Rossetti, Maria Elena Barbati, Maria Giovanna Monica and Carola Varini and a Spanish, Paris based, sound engineer.

In this image we were on our way to the Tuck shop for lunch having left their equipment chez Vincent Gagliostro and it was easier to take the metro then divide up in taxi's. I saw these kids and could not resist asking for this photo.