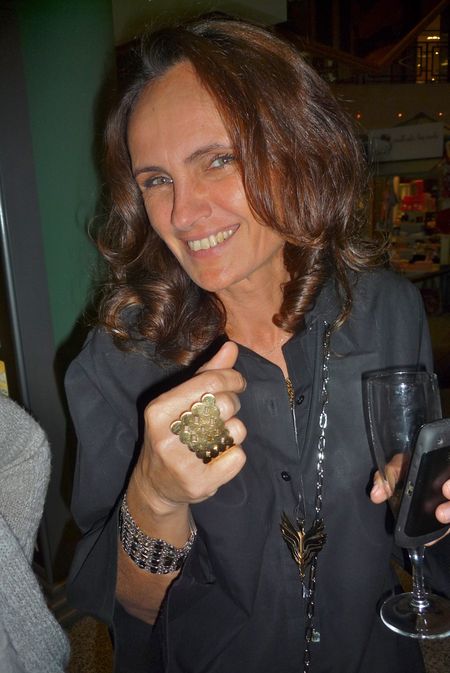 Susan Sabet wearing a ring from Sabry Marouf at CFN

I’m back in New York after 11 glorious days in Egypt. At the suggestion of my friend Susan Sabet, the editor-in-chief of Pashion magazine whom I met during Alta Roma in 2009, I traveled to Cairo to attend the 2nd edition of her event Cairo’s Fashion Nights. This edition was held at the upscale First Mall, which is next door to the Four Seasons at the First Residence where I stayed for 3 luxurious nights.

I really enjoyed meeting the young and established Egyptian designers; seeing their work and making new friends, and having long conversations with Cairenes who work in fashion, interior design and PR. We discussed everything from Cairo’s salad days of the Roaring Forties to today’s state of affairs. Besides fashion, I learned a lot about the nuances of Egyptian life, religion, class and, of course, the current political situation. While people were having a great time relaxing with wine and fashion, more than a few could not refrain from filling me in on the current political troubles. It was quite illuminating, and a refreshing change from the specious, sloppy and agenda-ridden reporting on Egypt by the Western media.

While fashion might seem frivolous to some in light of Egypt’s current situation–the country’s journey on the long, rough road to democracy–many see it as another example of the vitality and resilience of the Egyptian spirit. The culture of fashion emphasizes the importance of the larger role that creativity plays during times of civil unrest. 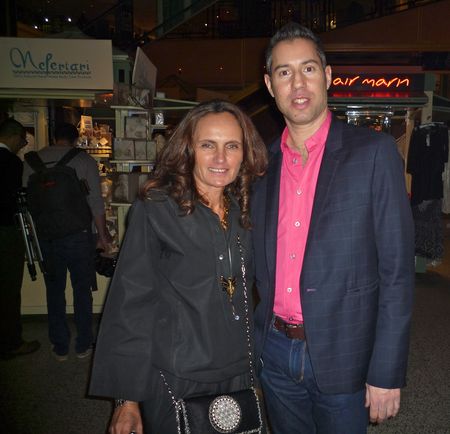 Susan and I at CFN. I could say I look a little dazed from the jet lag, but I often look like this.

Glenn Belverio: As you know, American Vogue launched Fashion’s Night Out in the fall of 2009 in response to the economic downturn that started with the market crash of 2008. Anna Wintour wanted to inspire people to go shopping again. But lately, many fashion critics, particularly Cathy Horyn, have rightly complained that there’s no need for the event anymore, which is held in many cities from Milan to Paris. I think the New York version has become a pointless free-for-all for bridge and tunnel hoi polloi who would otherwise never be invited to a fashion event. Plus, the American economy is up and people are shopping again. Now Fashion’s Night Out just feels like a Vogue branding ego fest.

However, in Cairo it’s a completely different situation. Egypt is in the middle of a political transition, to put it mildly. Amidst tumult and uncertainty, Egyptians are just trying to get on with their lives. What were some of your hopes and goals for this edition of Cairo’s Fashion Nights?

Susan Sabet: Based on the initial idea of Vogue’s Fashion’s Night Out to get the retail business up again, we launched Cairo’s Fashion Nights in November 2011, ten months after the Egyptian revolution.  Another year down the road, retail is still not what it used to be in the pre-Revolution era, and people need encouragement and extra enticement to go down to basically resume their old way of life. The full house we had I think is proof we succeeded. But Cairo’s Fashion Nights is also aiming to promote the many young Egyptian designers that have started to appear on the scene in the past couple of years. Many of them do not have the means to open up a store or find it difficult to find local key retailers that specialize in high-end international brands to display their products. So an event like this is the perfect platform to get their name and product out there.

GB: You have a delightfully refreshing gung-ho spirit when it comes to organizing CFN. You were running around the First Mall, dressed for the event, but schlepping rolls of backdrop paper, tripods, glue guns and mannequins up and down the escalators, like a determined, hands-on producer putting on a play at a renegade theater. “The show must go on!” What was your creative process for launching this event and how did you decide who would be hawking their wares and services at it?

SS: Unfortunately there are always last-minute hang-ups and unexpected bad surprises, so I prefer to take care of the final details myself. CFN’s first edition was held in the Zamalek district, home to many high-end retailers and local designer ateliers. This set-up had the charm of moving from store to store, even if more difficult, as we do not have shopping avenues as in Europe or NY and stores are scattered. Hence, we had to do the event over two nights to give shoppers the opportunity to be able to visit all the participating stores. Due to the political turmoil in the past months, I felt it is easier and more encouraging to find a compact outlet that boasts high end retailers as well as offers space for visiting designers. So the First Mall Cairo was the obvious choice and right partner to go with. GB: What are some of the things you think Egyptian designers can contribute to the worldwide fashion industry? How is their viewpoint different from, say, designers in New York or Paris?

SS: Young Egyptian designers like most young designers in the world aspire to show one day in NY, Paris, Milan or London. They are exposed to international fashion through local retail, media and travel and follow the international trends. I think that the ones that are using traditional local fabrics and  handcrafts, or take inspiration by our culture and know how to adapt it to the current trends, are the ones that will succeed to stand out, provided of course they get the chance to show abroad and can deliver the quality needed to compete.

GB: What do you think the future holds for Egypt’s fashion industry under the current political administration? How do you think it can adapt to the changes in the economy and society?

SS: Egypt’s fashion and textile industry has always been big. The current situation has maybe slowed down many of the businesses but it is temporary, I believe. After all, we are 91 million people that need to be dressed. GB: What advice would you give to young, emerging Egyptian designers for making it in the local and global markets?

SS: Whether it is to succeed in the local or global market your product has to be in demand and of high quality. I tell them to go and visit trade shows in Paris or Milan to see what the designers show, what sells, what the prices are and where they can position themselves to find maybe a niche they can fill to lure buyers with something special. The fashions of Deana Shaaban I chatted a while with designer Amina Khalil who founded her brand, Amina K, in 2009. Amina studied fashion design and marketing in London and it shows because she comes off as very savvy and versed in the international fashion scene. The brand is inspired by and dedicated to Egypt: Amina almost exclusively uses Egyptian resources, fabric and workmanship. (However, the much-touted Egyptian cotton is often hard to find. The global demand is so high–all those high-thread count Egyptian-cotton sheets!– that most of it gets exported.) Her limited-edition pieces put a modern Western spin on traditional Egyptian silhouttes. I really like how she does the layered look…all those scarves and other knit pieces are so chic for hanging out in the desert. Designer Deana Shaaban and CFN reveler. Hedda Hopper is looking up from Hades, green with envy over those hats…. Jewelry designer Azza Fahmy, Indjy Hosny and Rawah Badra. I visited Azza’s workshop outside of Cairo during my trip–story on that to come, stay tuned. Rana Kandil, who does PR for Azza Fahmy, models one of Azza’s pieces. “I’m just crazy about Tiffany’s! Nothing very bad could happen to you there.” Especially when they’re serving Egyptian sparkling wine, which was pretty top-drawer. At one point, the young waiter shot a cork cannon-like across the small boutique and it almost split a yellow diamond like an atom, and we all laughed and drank 8 more glasses and thought it divinely tres fou. Hibba Bilal, my host and the Director of PR at the Four Seasons at the First Residence, and I chatted at length about Egyptian society, pop culture, art and politics. Hibba, me and Ricky Martin outside the Bulgari boutique. We went in and ogled the bijoux for a few moments. In the middle of the evening, there was a catwalk show of Egyptian designers. Here’s a look from Nevine Altmann. A look from Hany El Behairy My new Egyptian friends! Jewelry designers Ahmed Sabry and Daki Marouf of the brand Sabry Marouf. I will be doing a longer post on their work next week, but here are a couple of their very cool pieces: Me modeling a Sabry Marouf silver-plated metal tie. I like how it looks with my pink Paul Smith shirt. Fashion! Turn to the left. Shahira Fahmy, Susan and Laila Al Far. I had a long chat with Shahira. She is a real renaissance woman. She used to design for the brand Mix’ n Match and now does creative direction for them. She also designs interiors and did the suites at the Four Seasons at the First Residence and other hotels in Egypt. She really filled me in on Egypt’s political situation, it was very informative. The night more or less climaxed with a rather giddy French wine and dance party at a club in the First Mall called 35. The party was hosted by the French Embassy and the theme was “The Best of French Fashion in Cairo” and there were new looks there from Nina Ricci, Lanvin, Celine and Kenzo. Pictured above is Camilia Galey (left), the wife of the French Ambassador to Egypt, Nicolas Galey. Mrs. Galey really tore up the dance floor and was the life of the party! I had pizza with her and her husband, cousins and friends afterwards and it was a hoot. She is from Algeria and we talked at length about the Middle East and New York.

Thanks for reading and please visit Egypt and support Egyptian fashion and tourism! Egypt is safe if you possess common sense and now is the time to visit some of the world’s most spectacular sites without having to deal with huge crowds of tourists.

My drive-by photos of the streets of Cairo

My visit to the astonishing Temples of Abu Simbel