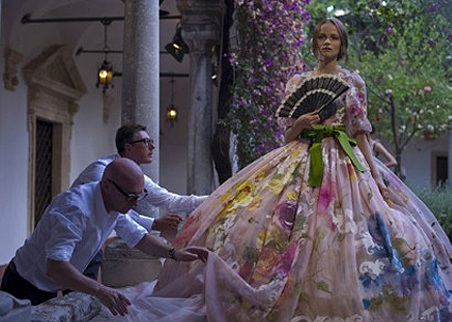 Domenico Dolce and Stefano Gabbana of Dolce & Gabban just unveiled their first haute couture collection fall-winter 2012-2013 in Taormina, Sicily. The location was in one of my favorite hotels, where I stayed many years ago, San Domenico, a former convent. They had flowers that were drowing in perfume and insense. The antique couches were set as if they were in the Palazzo Gangi in Palermo. The atmosphere that they created was as if we stepped inside a Visconti film. There were antique carpets strewn on the ground while the bougainvillea and the roses were drowning from the heat. A singer and an orchestra linked together melodies of the opera repertoire of the nineteenth century. Suits were very black circa 1950, tweed coats, lace and hand painted flowers, embroidery, cut-work…very couture.