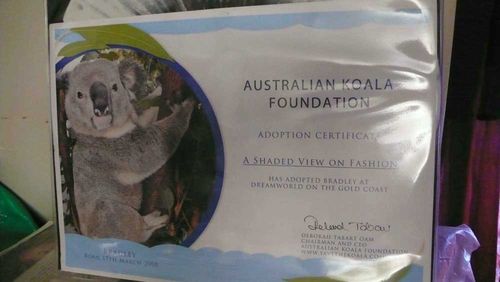 I came home to the sad news from the Australian Koala Foundation that my adopted son, Patrick had died.  He was ill for the last few weeks, they did not explain of what, and they had to put him to sleep. This brings out once again the fragility of life for the koala even though Dreamworld, where he was living took excellent care of him. There are only 8 joeys up for adoption and they took the decision to give me Bradley. Bradley is adorable, quiet male and loves his cuddles but don't you think that they should have given me a choice before replacing Patrick with Bradley? I was a bit shocked and informed them that you cannot just replace one with another without giving me a choice. They apologized saying he was the youngest and sweetest in Dreamworld.

Anyway I will see the new Joeys in mid July , maybe I stick with Bradley but I really think it is a bit callous to just say he's gone now this is your new adopted koala.