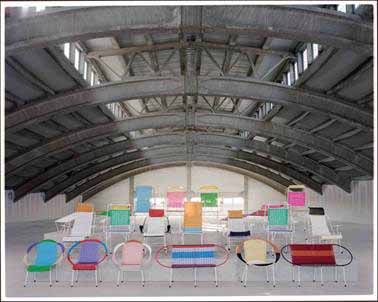 I found this project interesting, for Salone del Mobile 2012, Marni will present 100 chairs made in Colombia by ex-prisoners. All chairs have a metal structure and multi-colored PVC threads on the backs and armrests. Marni modified the woven pattern and color variations on a common Colombian chair.

The chairs were also part of a film and photo exhibition that will be presented in the Milan Marni boutique during Salone Del Mobile and then will tour various Marni boutiques around the world. Francesco Jodice is the photographer/filmmaker and he will use the chairs as background for a series of portraits of Marni teams from different departments.

The funds raised from the sale of the chairs will be donated to the institute ICAM of Milan – a project which allows children of imprisoned mothers to spend their youth in a family environment.