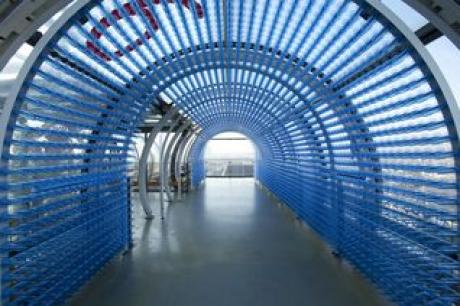 The Irish artist Bryan Mc Cormack, has lined the glass walls of the escalator of the Pompidou Centre in Paris, with 80,000 condoms in all colors.

"The condom is associated with AIDS, contraception, sexuality, religion. Often one or the cache is not mentioned. I wanted to be looked at in another way, lightly, in a neo-pop, "saysBryan Mc Cormack. "Everyone knows the subject. When it is isolated, it is very sexual. Butwhen it is replicated by tens of thousands, the public loses its bearings, "says the artist who works in Paris.

A temporary installation, confusing and spectacular, the colors of the rainbow sky, is offered to visitors Beaubourg, until December 5. To find out, take the escalator outside the CentrePompidou