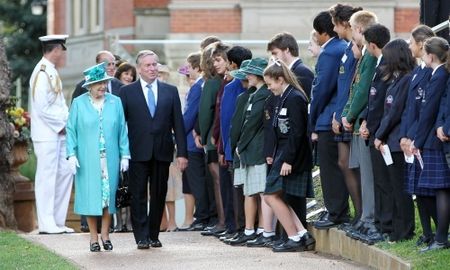 Bella is in the front row next to the girl with the hat.

My friend Bella was voted Head Girl of her school for 2012,so, she and the Deputy Head were given an invitation to The Garden Party for the Queen.
There were 70 Head Prefects from Perth schools invited.
The queen is in Perth for CHOGM(Commonwealth Heads of Government Meeting), and yesterday there was an afternoon tea held in her honour at Government House.
Prince Phillip said to them "It's like Noah's Ark…there's two of everyone."
Bravo Bella.
Later,
Diane