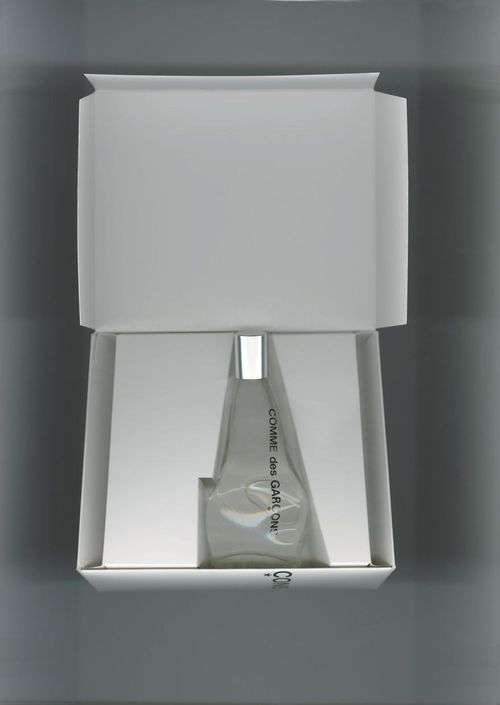 In a few days you will actually be able take the bottle out of its incredible white box. Rei actually made this box herself out of one piece of white cardboard. Of course the challenge is going to be how to put it back together again. I watched the white box unfolding and being put back together again but it is not that easy but then again Rei is not someone that believes in easy. At any rate you are not going to want to throw the box away.

"The rejected bottle survives to hold an imaginary flower constructed linearly, the fragrance opens with the man made organic composites of aldehydes and safraleine, opening up slowly to hawthorns and derivations of lilac, before exploding in a riot of flower oxides, then finally succumbing to notes of industrial glue and brown scotch tape with hints of musk and strax"

lilacs and oxided roses…in order to justify the new bottle, not to mention the box,  Rei wanted to create something really unusual. It is a floral perfume but it is industrialized flower to go with the glue… Complicated and evolutionary…The challange with this fragrance was how to  distinguish this fragrance from the very first fragrance that CdG ever created. Friday…you too can experience 'we can find beautiful things, without consciousness'