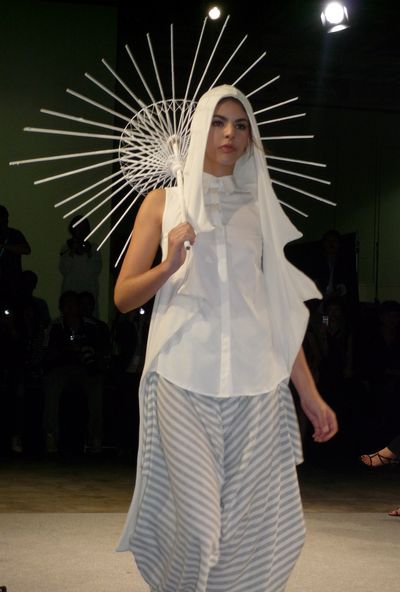 Above: A look from max.tan

Two weeks ago I was invited to the independent city-state of Singapore to cover Audi Fashion Festival and the Blueprint trade show for A Shaded View. Singapore has got to be the most ideal global location for a fashion week, mainly because it’s the luxury fashion mall capital of the world. The fashion outposts of brands like Chanel and Fendi have massively huge shops here and the hotel I was staying at, The Fairmont, was virtually wrapped in a shopping mall. One minute I was trying to find the fitness center or the breakfast room and suddenly I was not just in the middle of an Hermes store, but half-naked in the dressing room without realizing how I got there.

The tone for this was set when I checked into my hotel room and discovered that there was a mini Prada boutique in my bathroom and a Gucci handbag counter next to my bed. At first I didn’t mind but then when the salespeople kept waking me up in the middle of the night trying to get me to buy things, it got a little annoying.

I was extremely jet-lagged when I arrived so the only shows I remember seeing at the Audi Fashion Festival were Antonio Berardi (very nice), Triumph lingerie (an ill-advised spectacle that looked like a high-school production of a Victoria’s Secret show, with accessories culled from dumpsters) and Ungaro (ghastly). I missed the most buzzed-about show, Raoul, but I’ve covered it below because the clothing was wonderful. 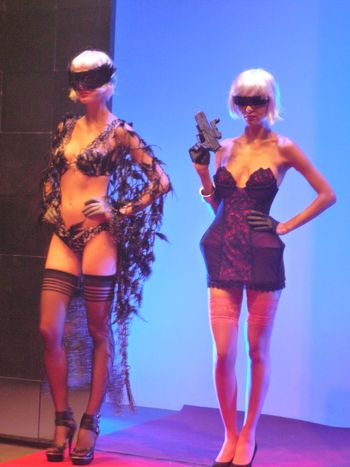 Above: Laughable lingerie…Triumph was a tragedy.

Blueprint, which took place at the Marina Bay Sands, was very nicely put together and featured booths and catwalks by interesting designers from Singapore, Bangkok, Beijing, Delhi, the Dominican Republic, Hong Kong, Jakarta, Kuala Lumpur, London, Manila, New York, Seoul, Sweden and Tokyo. All of the collections were Cruise which makes sense because steamy Singapore is practically one meter above the equator, so it’s a year-long cruise destination. (I think equatorial fashion weeks are becoming my beat: Last month I was at a fashion week in Fortaleza, Brazil, which is just below the equator.) 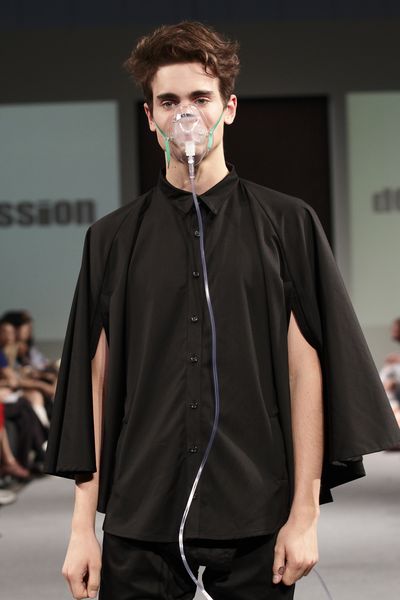 Singaporeans Andrew Loh and Kenny Lim were depressed with the “corporate struggle” after working at various advertising agencies for 15 years and not having a true creative outlet. They turned their depression into DEPRESSION, a clothing line that I would describe as “Japanese-influenced design meets Joy Division.” “Being avant-garde or quirky is no longer enough for today’s shopper,” the now not-depressed boys proclaim. A perfect Cruise collection for wearing during that cruise down the River Styx. 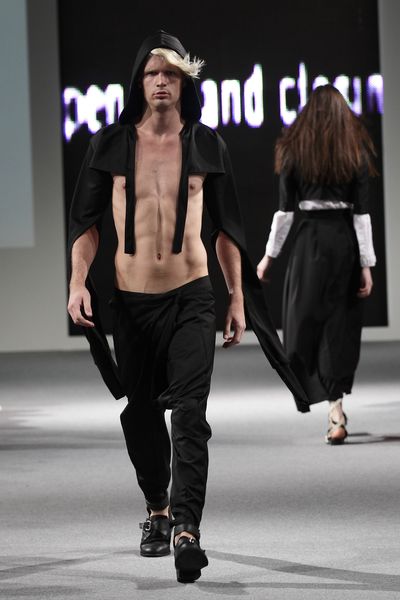 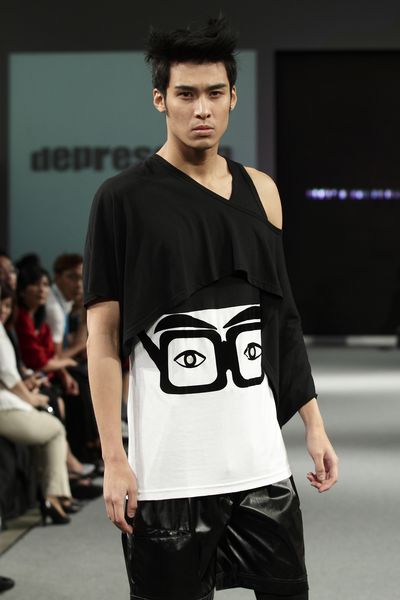 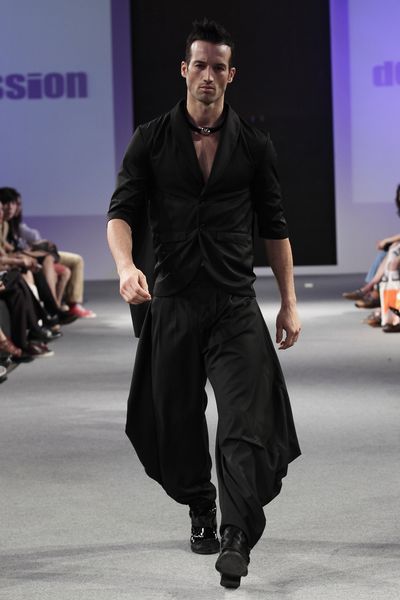 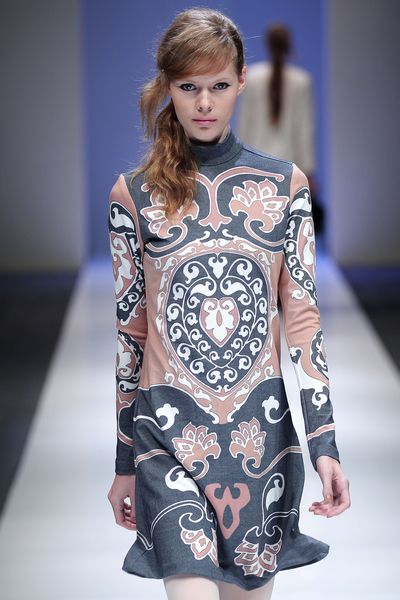 RAOUL, founded in 2002, is the Singapore brand best-known on the international circuit, having shown in both New York and Paris. Besides men’s and women’s wear, the brand has expanded to accessories and timepieces. I really liked the elegant simplicity of this current collection. 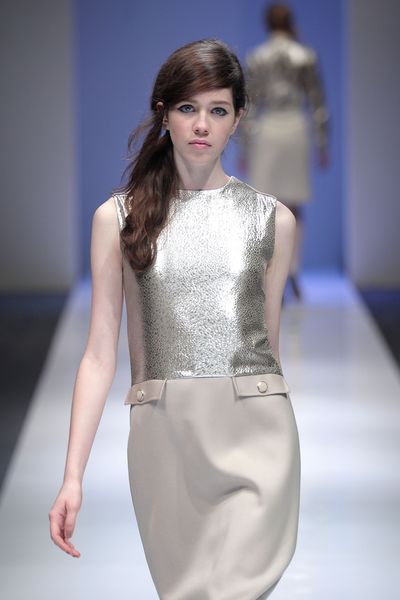 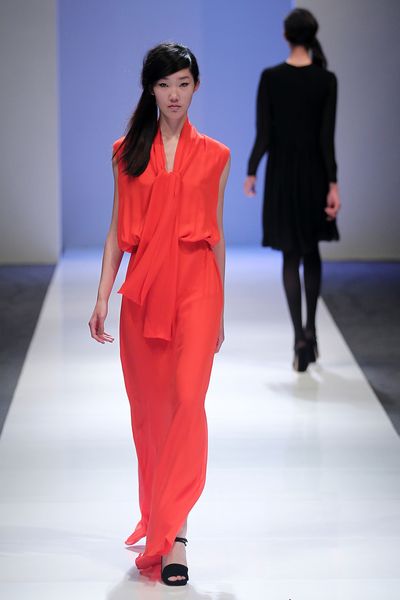 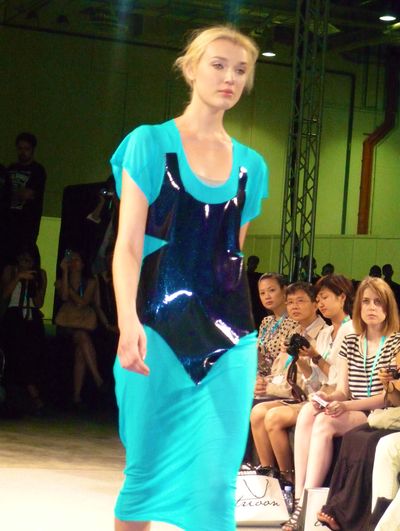 Another interesting Singapore designer was MAE PANG, who played florescent colors off of slick patent panels. 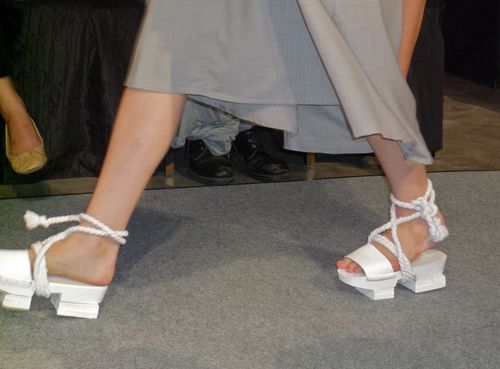 I really liked the sandals at max.tan 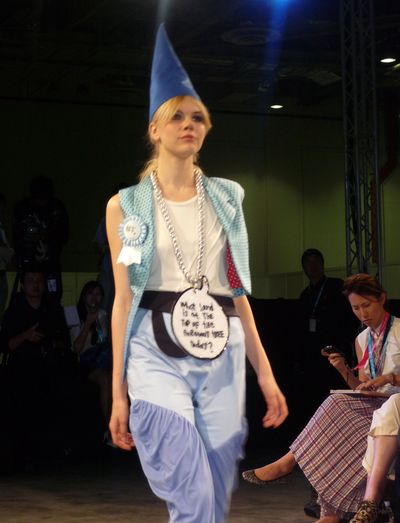 Singapore label REVASSEUR (French for “daydreamer”) is designed by Gilda Su who honed her skills during four years of study in Japan. Her aim is to “bring fun back into fashion and to encourage its wearers to experiment.” I enjoyed her quirky sensibility. 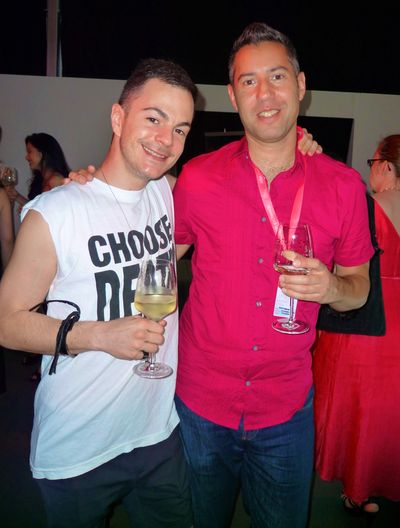 Joseph Quartana of 7 New York and I at the cocktail before the Ungaro show. Joseph was globetrotting all over Asia, with a stop in Seoul before Singapore and then he was off to a a DJ gig for Designers Against AIDS in Bali. 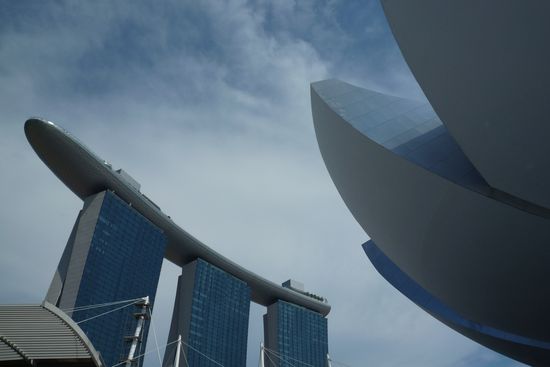 Blueprint was held in the complex that is part of the gigantic and dramatic Marina Bay Sands Hotel & Casino. Designed to look like a trio of joss sticks, the hotel boasts a massive rooftop bar that’s an open-air green park. I never made it up there but Joseph said it was spectacular. 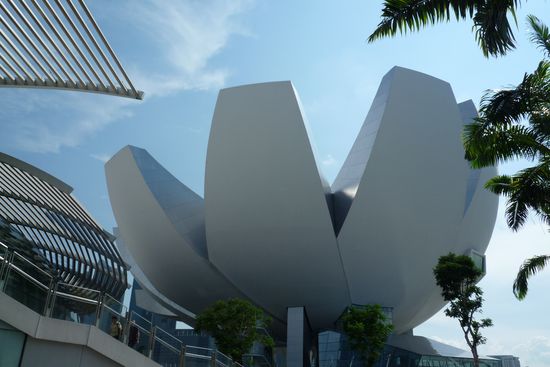 Complementing the “joss sticks” is the Museum of Art and Science which is designed to resemble a lotus flower. 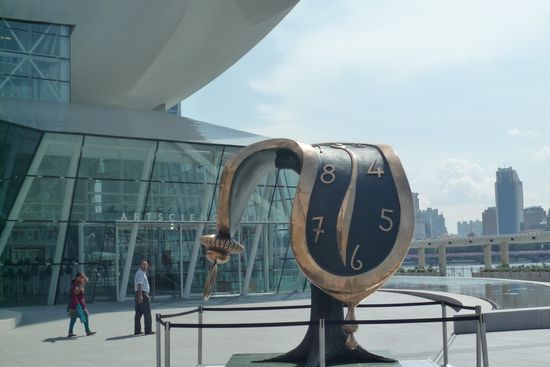 I couldn’t tell if this was a Dali homage or just a sculpture that couldn’t withstand Singapore’s relentless heat. I nearly fainted standing out in the sun for 5 minutes to get these photos and I’m a sun person. 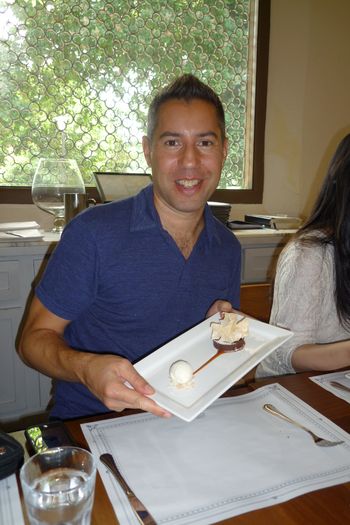 Me during lunch at the White Rabbit, a beautiful converted church. The fashion-week organizers from Mercury PR invited us there for a lovely Eurocentric lunch. 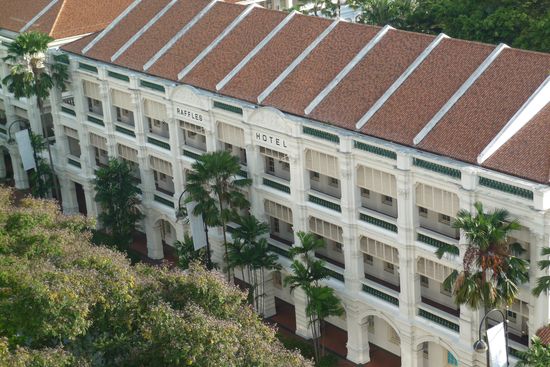 I had a view of the legendary British Colonial hotel Raffles from the window of my luxe room at The Fairmont. 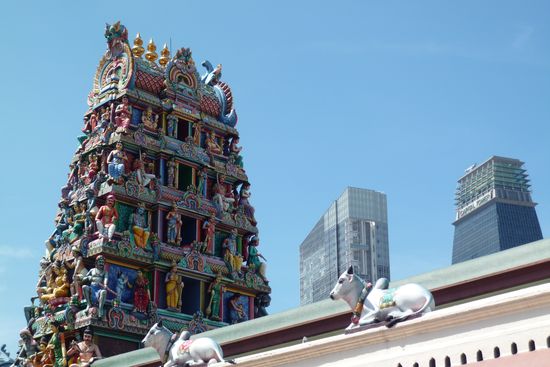 Singapore is more than just shopping malls; in Chinatown and Little India, colorful Buddhist and Hindu temples vie for attention with the surrounding skyscrapers. 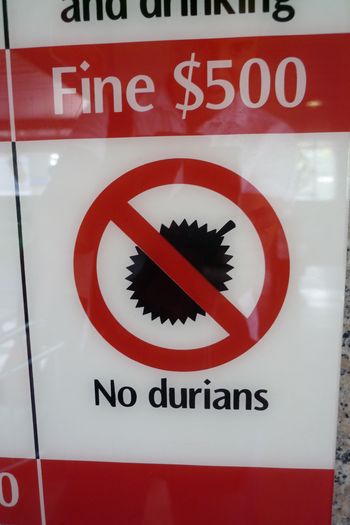 A close call: When I saw this sign I realized that I had forgotten about the two durians I had tucked away in my Bernard Wilhelm man purse. It’s illegal to carry them on the subway or buses or to have them in your hotel room. 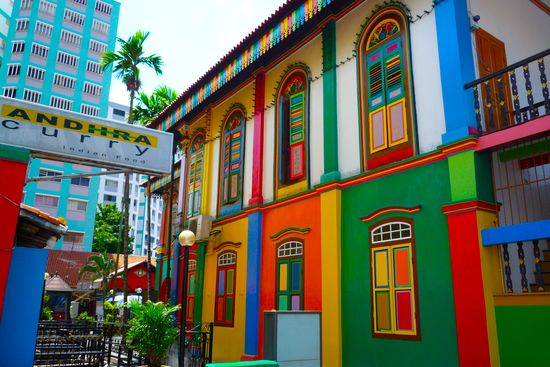 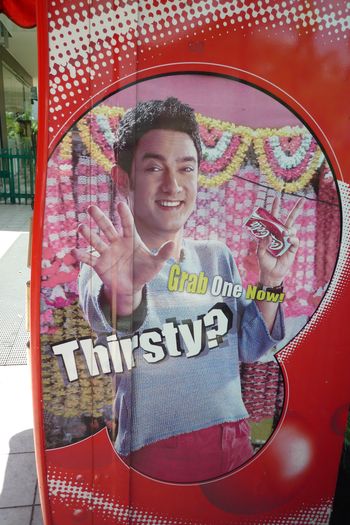 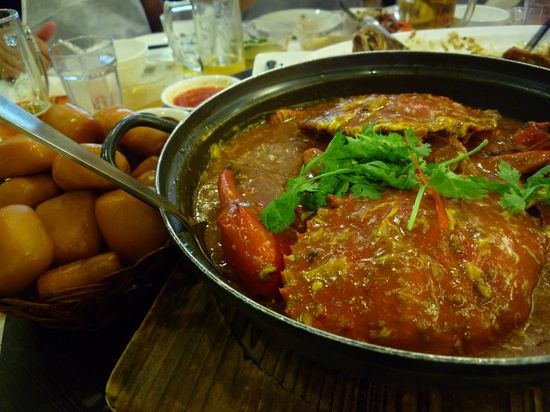 No trip to Singapore is complete without a dinner of chili crab. We had ours at Jumbo Seafood in Clarke Quay. 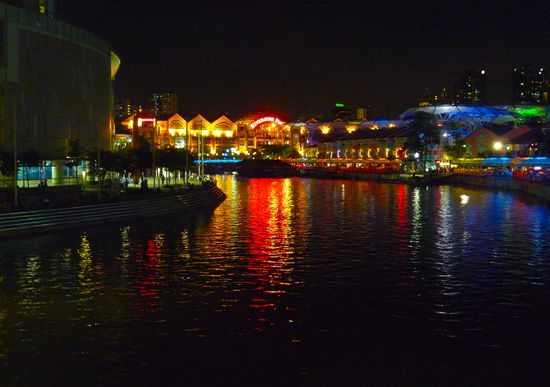