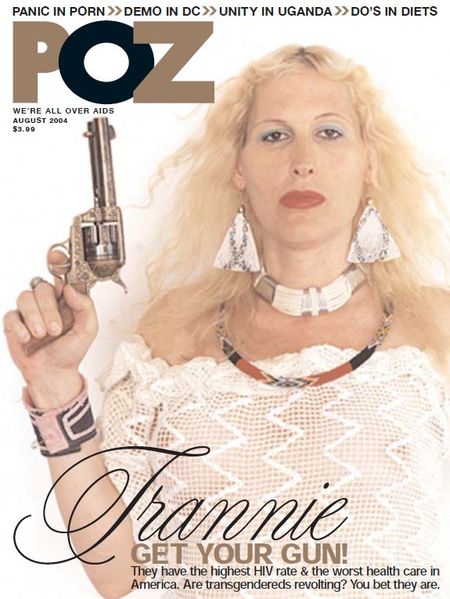 I attended a beautiful memorial service for Chloe Dzubilo, who passed away on February 18, at Judson Memorial Church in New York this Saturday. She really brought everyone out, so many people I haven't seen in years, freaks and queers from the activist and club scenes. Rosario Dawson spoke about her friendship with Chloe, Justin Bond and Antony sang beautiful songs, Stonewall riots veteran Yvonne Ritter told amusing tales.

I can't remember how or where I met Chloe, but it was some time back in the early '90s. I remember going to see her terrific punk band, Transisters, play at Squeezebox sometime in the mid '90s and used to run into her everywhere from Tompkins Square Park, where we sat on the grass with Viva Ruiz and talked for hours, to Marc Jacobs shows to East Village apartment parties. I hadn't seen her since she and her husband T De Long attended my birthday part at my apartment in 2008. But back in the '90s before texting and emails, Chloe used to call me at least once a week and leave epic messages on my answering machine. After about 10 minutes my machine would cut her off and she would call back and continue on and on about her equestrian events and activism. I would sit there and listen to all of it, so amused, it was so Warholian.

Sometime in the late '90s, Kembra Pfahler invited us to a screening of a film she was in at the Anthology Film Archives. I ran into Chloe in the lobby, she had just come from the hospital and had some surgery, I can't remember what or why. But I think it was something abdominal-related. She was in weak condition but like a trooper, came out to support Kembra. What we didn't know was that another film was being screened before Kembra's and had no idea what it was. Well, it came on and it was a documentary about some Austrian performance artist whose act consisted of him slaughtering dozens and dozens of cows. It was a veritable bovine holocaust. There were cow guts spilling out out over and over in vivid color, blood everywhere. And for an entire hour Chloe, who was sitting next to me, clutched her stomach and wailed and moaned and cried, rocking back and forth. I kept thinking, "Of all the luck, they would be showing something like this!" I thought it was hilarious that she didn't leave and that we endured the entire film–mainly because I think we thought it would be shorter and didn't want to miss Kembra's film.

Chloe was a fierce transsexual revolutionary, a longtime HIV survivor, a punk poetess. She changed the derogatory designation of "gender dysphoria" to "gender euphoria." She had such a way with language and that's why I always looked forward to her long, loopy answering machine messages. "Transwomen are still treated as women were in the early days,where women weren't allowed to be angry if something wasn't right for them," she said in a recent interview. "I've been oppressed by so many different types of people that eventually it just becomes absurd and comical almost. It's so ridiculous how much gender is still the final frontier!!!"

Goodbye Chloe, we are all going to miss you.