I finally decided to abandon my computer after some severe overuse and made a great discovery in town. Hunting and Collecting, which is located on Rue des Chartreux and opened last spring, clearly redefines what a store can be. The entirely refurbished space is beautiful, with very high ceilings and an open feel. The selection of labels was brilliant, from funky Barcelona and Tokyo designers to modernist American and Scandinavian brands. Highlights for next season include Silent by Damir Doma, Dana Lee, Maria Luisa, White Mountaineering, Sandrina Fasoli and Christopher Shannon. It was a breath of fresh air and I ended up talking to the owners, Aude and Niels, for more than two hours. One of my favorite features in the store is the changing rooms area, which has a cabin in the woods feel. Could be the ideal place for stylish boy scouts having a picnic. 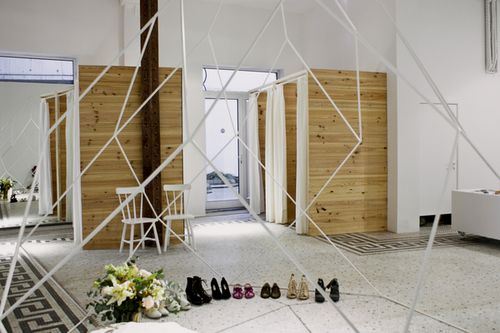 Korean artist Kwangho Lee will show a selection of his works there during September. The vernissage is scheduled for the 10th from 6pm.