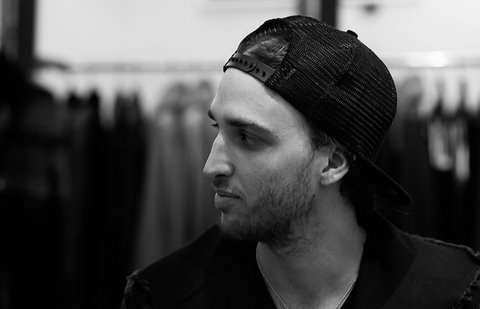 Passionate. Obsessive. Excited. These are some of the adjectives that come to mind after talking to Austin Sherbanenko and getting a sense of who he is. The twenty-something, LA-based designer is an engaging and convincing individual, a true independent spirit taking you to places you were scared to explore, sharing his love of adventure and challenges along the way. His line, Odyn Vovk, is as intense as his founder, delivering beautiful and essential clothes that he shows in New York. Completely self-taught, Sherbanenko is a bit like a UFO within the fashion landscape, working with a tiny team in his LA warehouse and not wanting to grow too fast. In this candid interview, Austin shows he has a strong point of view and strong opinions to match. I loved his direct attitude and honesty. Hope you will, too. 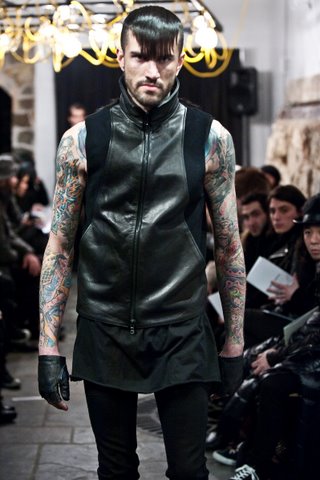 How do you feel once the show is out of the way? Are you ready to move on to the next thing?

Well, I'm really focused on the styling and putting all the elements together before the show and, once it's done, I'm like "Ok, let's go back to LA and start with the next one!". I get bored very easily and that's the fun with fashion and why I enjoy it so much. I think I'll be around for a while, I'm too ADD and hyper. I need the change constantly.

That's the obsessive element within fashion, I guess. Actually, it's interesting because I sense something rather intense in your clothes and shows. Do you put a lot of yourself into them?

Yeah, definitely. We don't really work the way most brands and designers operate. It's a super small thing: me, my sewing team in-house and Christina, my other half, girlfriend and life assistant. It's a very organic way to do things. We live and work in this warehouse in downtown LA. I think I'm very fortunate in a way -despite the area we're in, with all the crackheads and terrible things- because not having the luxury of a twenty people team is what drives me. You just draw something, then someone makes it, you get the sample back and correct it. It's very tight and that is very special to me. I don't draw the collection and then send it to China for production. Everything is made in-house, it's very hands-on and that's something I'm really passionate about. I'm involved every single step of the way and I'm proud of that.

Do you feel this growing pressure now that you're getting more exposure and gaining more clients?

I'm not the kind of person that feels pressure that way. I do stress out about certain things, but not really about my work and what people are going to think. I'm pretty confident, I guess. It could be a bad thing sometimes, but Christina really helps me, forcing me to take a step back and see how I feel. The whole design process is very instinctive. I'm super excited with each new collection and go to bed thinking about the next day and what I'm going to design.

Yeah, exactly, it never ends. When I come to New York and after the show, I can relax for a while and do other things. Otherwise, it's pretty much full on, but, you know, I'm totally happy with that. I can settle with things that I'm happy with, but I have a sort of minimal approach towards things. If I look at something, I know instantly when there's too much and when I should stop. 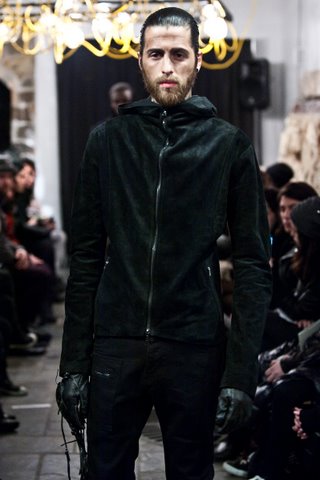 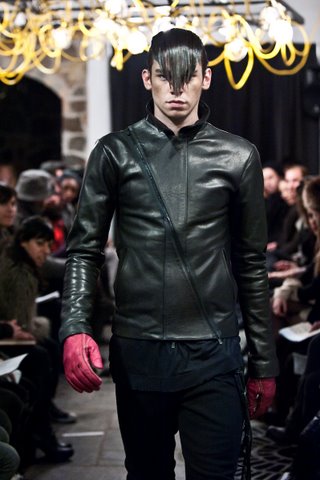 Is that about perfecting the clothes and reworking things until you're satisfied with them?

Can you tell me about Tony Ward and the film you made together. How did that happen?

Tony and I met through a mutual friend a couple of years ago. We hung out in LA during different occasions and one day I asked him if he'd agree to do the lookbook. For this collection, I was inspired by Abu Dhabi and Dubai, the ghost town and the boom town. It was about pieces someone would have initially bought and worn during the boom period. It was like this reverse idea of a town like Dubai, being a complete desert at first and then having all these buildings coming out of nowhere. I wanted to evoke the former affluence of a place now turned into a ghost town. The clothes had to be broken-down, broken-in, distressed and unfinished. Basically, you could tell they were substantial pieces, but all that was left was the foundation. So we went out to the desert in California and rented a motor home. We had no intention to shoot a video there, but it kinda happened with one of my friends directing it. And Tony was just amazing. I knew we could make something out of these images. Tony's been shooting and modelling for longer than I've been alive and is truly great to work with. His first shoot was in 1982! He was very comfortable in front of the camera and my friend Chris was filming all these scenes. We edited the whole thing in about three hours and added music afterwards.

This idea of a guy wearing your clothes in the desert made me think of pioneers and individuals with a sense of self and adventure. Did you have some of these ideas in mind?

Yeah. That kind of goes back to the original meaning of the name "Odyn Vovk" which means "one wolf" in Ukrainian. It relates to my grandfather's life when he came to America from Ukraine, having worked in German Nazi camps. It's this idea of hunting to maintain your existence, doing anything to survive and anything for you family, too. But that relates to my story as a designer as well, starting out in this business alone, figuring things out on my own and doing most of it myself. I definitely didn't want to create this brand concept or design for someone else. I wanted to learn by myself and not have any kind of guidance, with someone telling me what was right or wrong. I wanted to figure out what was wrong myself. That's how the desert relates to my story. I remember driving on a motorbike and getting lost there once, with no gas, trying to figure things out and thinking how I would find my way back.

Does living in LA give you a sense of being removed from the fashion world?

It definitely does. The thing is, it doesn't matter that much where I am, I could be in Alaska and still make clothes. My brain still works the same, I'm still inspired by what I'm inspired by. My life experiences feed my work, as well as my surroundings. I love going to Paris for sales or visiting friends, but I could never live there. I feel you start taking advantage of things when they are too accessible. I'd rather stay in LA and be in my bubble, in my warehouse, not surrounded with any fashion people, unconsciously inspired by other fashion designers. A lot of people take these fashion cities for granted once they move there. When I come to New York for the show, I don't spend the whole time at parties with trendy people around. I like getting to know about the history of the city and discovering something new each time. In LA, I'm in my own zone and it's not normal where I am, but that's me. 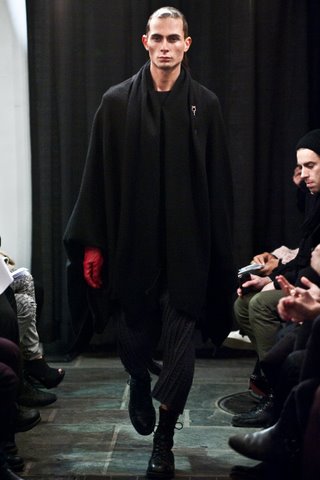 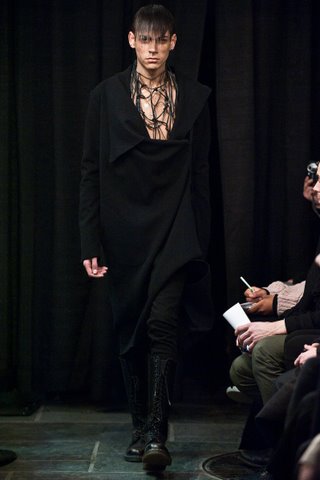 What do you think about the way men dress now? Do you think you could have done what you do now twenty years ago? Has there been a significant shift?

Yeah, there's definitely been a shift. It's hard to explain… I feel like a lot of brands, like Uniqlo, H&M and American Apparel, are kind of ruining things for the designers though. They want to dumb things down, make them in China and get it at a lower price, making it more accessible. I mean, it's fine, but I think it's really messing with the industry in a way, because it's taking the specialty away from classical tailoring, the craftsmanship and quality control. I see guys who are stylish, but you know that the looks were not created by them, the designs were just stolen from someone else and I don't like that.

Are we experiencing fashion overload then? Is there too much stuff around?

Yes, that's what it is. It's very overwhelming. It's hard to explain. It's like that LA hispter scene with the skinny pants, little t-shirts and trendy guys listening to the same bands, going to the same clubs. In a way, I'm blaming these brands and the people behind them for creating that generic thing. These people don't need to come to my show. It frustrates me, you know. This whole "buy one get one free" thing is just junk to me as it defeats the whole purpose of crafting unique, minimal pieces. I just feel that America is very saturated and all over the place.

Accessibility can be a good thing, though, if you use it to promote people you believe in. From a designer's point of view, it may be more problematic with the whole issue of copying and being ripped off.

At the end of the day, ideas travel around and noone really owns them. I guess what matters is developing your own identity. You've always got some women's looks in your show. Is there a women's collection, too?

There's no women's collection as such, but I'd love to develop it in the future when the time is right. The pieces you see are for the show, but I also sell them in the showroom. You know, some of my pieces are pretty unisex. This idea of masculinity injected into a woman's piece really appeals to me.

How do you want to develop and take the collection forward?

I want to do things the right way and can find it hard to trust people sometimes. It took me a long time to get where I am and I don't want things to get screwed up. If something's wrong with the production, then the clients will notice it and the clothes won't sell and you'll lose an account. At the moment, we've got about 15 doors and I'm happy with that. Every season, we get a couple more accounts and I'm totally happy with that, I don't want to do millions and millions. I can't handle any more than what I've got now! I just want to build up things slowly and I want to follow every step. I'm keeping it tight and that's the way I want it. It's just who I am.