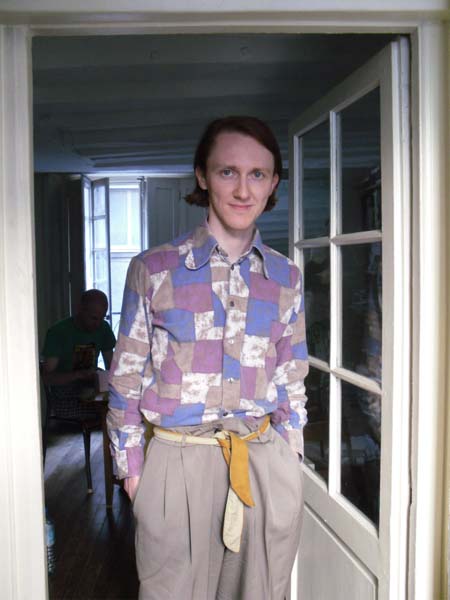 Just when we were thinking that we should have a DJ for the 2nd night of ASVOFF 2 at the Musee Galliera I met Louis Heel aka Disco Doctor or Geraint Edwards chez Mr. Pearl.  They are great friends  and Geraint is a former 'stich bitch' of Mr. Pearl  In addition to being a designer he's been writing music and DJ'ing and has a night in London called Ebonite. The program Saturday the 26th September starts at 14h00 with 5 short documentaries, the selection of films in competition, for those of you that did not see it the night before, and around 19h the out of competition films will screen and that  includes  Nick Knight, Undercover, Roisin Murphy, Audrey H attends Hubert de G's 40th and Mr. Pearl. At 19h30 Jeffrey Hinton will introduce his 3 films a mad mix of London in the 80's which includes an early photo shoot of David LaChapelle for BodyMap, Leigh Boweryand other moments with BodyMap. Following his films Jeffrey will do a Q & A and then Louis Heel takes over  as the DJ from around 21h to midnight.

Closer to the date we will list the entire programming for the 3 days at the Musee Galliera. I'll give you another teaser, Sunday we have short films featuring Chloe Sevigny, Kim Gordon and Devendra Banhart by Alia Raza at 14h followed by Chicks on Speed films, the competition, for those that missed it the night before, Roisin Murphy then the music competition and a live performance by Yoann Lemoine at 19h. a piano and sax will back him up. More on that later.