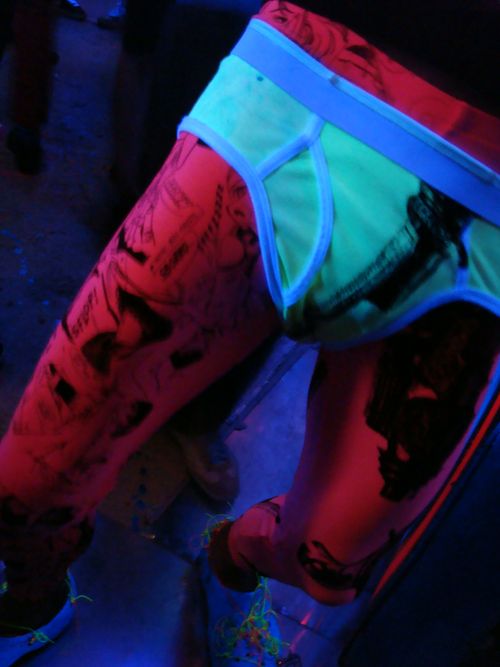 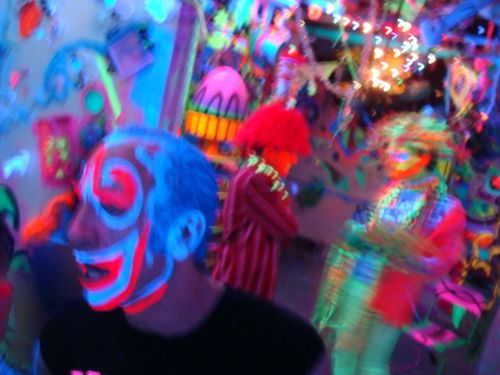 Utilizing his packed to the rafters studio basement in Willburg with glow in the dark correctness, Kenny Scharf throws a monthly blacklight party that has quickly become as infamous as his signature Jetsons on acid paintings. Every guest got personally face painted by the 80's legend who greeted them in neon gun print tights with a pair of tighty whiteys layered over them for a visually disatracting effect. Scott Ewalt gave gorgeous DJ drama and kept the kids bopping to a non stop parade of get down & boogie classics. The kids were way cute and everybody left their attitude at home. At one point early 80's legends Stephen Saban, Michael Schmidt & Lisa Edelstein magically appeared as if we had all been transported to the Mike Todd Room and for a secomd I forgot that it's 25 years since 1984 when Stephen Sprouse ruled the runway and flourescent chic was just about to cut into the public conscious like a deathly sharp blade cutting away at the banal. Kennys party transported it's guests back to a time & frame of mind that was filled with glow in the dark innocence.