The House of Blueeyes Show: a bacchanalian night of sequins and fabulosity, throws light in the shadows of cockney London at Beach Blanket Babylon. 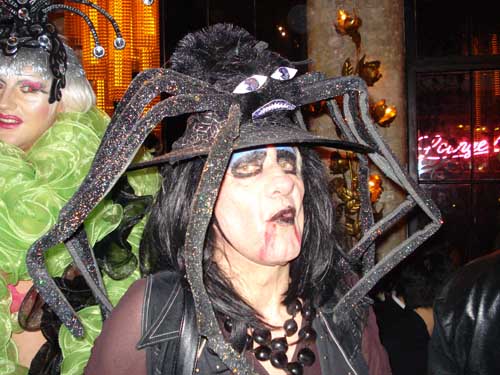 Michael from Blow had warned me that this was the most requested ticket on his roster of shows this Fashion Week, so to get there early, which given they worked on 13 shows this week, told me everything I needed to know: get there early! anyone who knows me, knows this is a rare event in itself; luckily jeremy picked me up in the astra gypsy wagon from Nazir’s show, where I had been so proud of what Anna (my ex assistant Dolly) Trevelyan and Sam Voltage had achieved. 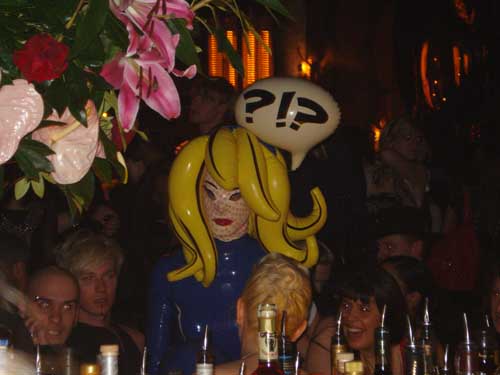 Heading east, Jeremy pointed out that in football terms last night was the ultimate hotdate: the final of the Championships League, so we popped into the local Owl and the Pussycat for a beer (him), juice (me) and football update, (0-0) when we left. Marching through the throng ab Beach Blanket Babylon, suddenly I knew what Berlin in the 1920’s must have felt like-the party at the end of the world and the finale of time (a huge inspiration for me aesthetically)-and now with the current climate, perhaps even more relevant.

A visual overload of trannies in cocktail gowns, grannies dressed as Dracula, boys led on chains and matriarchs in lingerie; glitterball Fracials of decadence and revellery hit my retina in every corner. Jeremy perhaps wondered why he had left the football, but I knew that this is where the real action was. The stories from the audience fascinated me: trannie gold medalist Jeanie D with 2 teeth and a spider on his head, Russella with her glittery Dorothy shoe red lips, Pia naked save some masking tape and a peach fur coat, as one glamazon told me, we’re a long way from Kansas now… 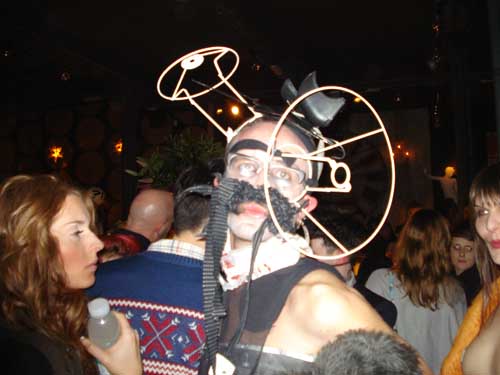 Jacquie Soliman from Agent Provocateur pronounced this the show we have been waiting for and in a way she is right: one which announces London’s more underground, underbelly, intent and content.

We’ll never be Paris, we aren’t couturiers, by showing in the Eastend, Johnny drew on London’s sleazily Victorian past: opium dens and decadence, sexual freedom and dark corners and translated these into rock and roll punk undeniable English freewheeling beauty. A masked duo danced on the bar top, while the shows freely chaotic madness unfolded: beautiful chiffon grey dresses, Betsy in a cape throwing roses and tarot cards at the floor, boys in underwear, girls in jewels, Tamer swaying his hips in russet tones. Patrick Wolff and Jodie Harsh sashayed from the floor onto the catwalk: the audience became the show, we are all free , we are all theatre, we are all angels. Johnny would say something like this and I am inclined to agree.

I said to Tamsin and Jessie, I am not sure Jeremy knows what to make of this, it’s outside his frame of reference, Tamsin (a leading climate change activist) pointed out that a lot of people want to be here; I replied, ‘Exactly, just as they did in Berlin’ We laughed we know, surely it’s better to enjoy the circus, celebrate the chaos, the painful freedom of these random moments of madness, while the ship sinks, we may as well enjoy the tunes of the band as we drown? 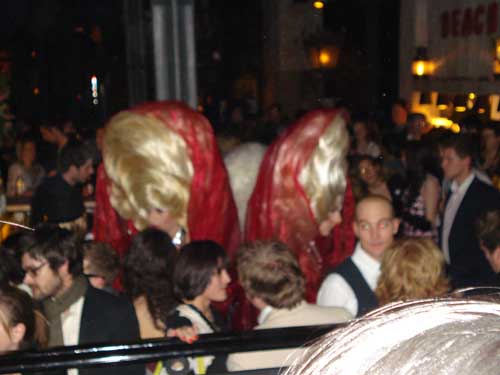