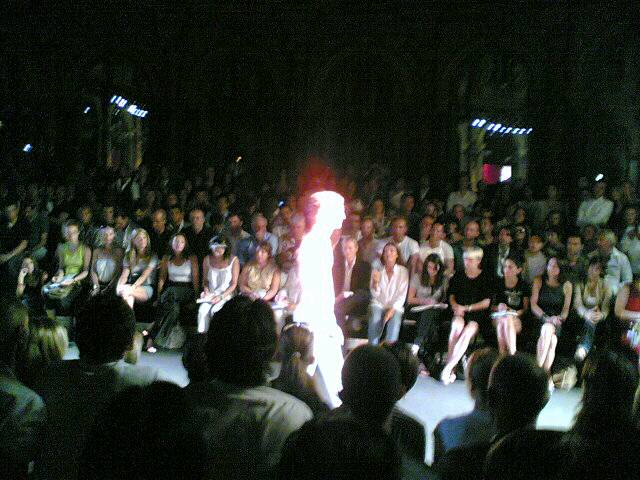 The ghost that you see walking by was about as much of the Kris Van Assche show that I could see from where I was sitting . All I heard was the sound track which kept repeating “There is nothing going on here”. Kris presented his first women’s collection , older women, younger men. Where was Charlotte Rampling?

There was a huge applause at the end. Rumors are still circulating but I suppose you will have to wait until after July 15th to finally find out if Hedi leaves Dior and if Kris takes his place. That is the date the current contract with Hedi will expire. I was speaking with a friend today who had mentioned that SP over at YSL gets 6,000,000 euros a year so I cannot say that I blame Hedi for asking for 2,000,000. God knows Dior makes more money than YSL.

After the show I ran into David TV. Last time I had seen him we spoke about a radio interview that i had done with him years ago called Transision/Translation, or something like that. Anyway i asked him if he could make a copy of it for me and today he handed me the cassette. Not only did he deliver but he also put a photo on the cassette cover taken in June of 2001. Not long after I had met Charles Anastase at the festival d’Hyeres. Thanks DTV.