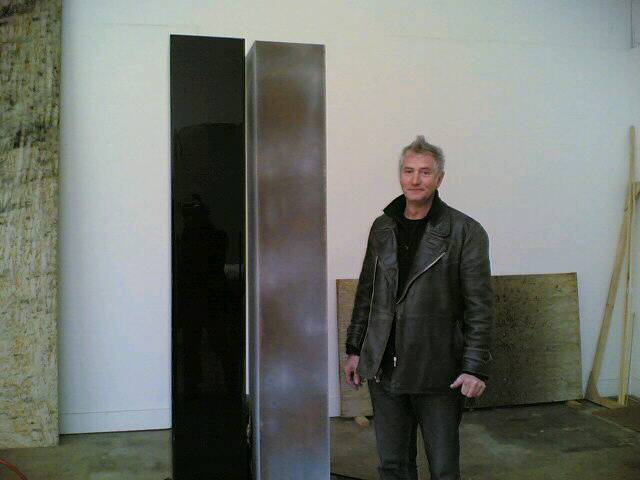 I spent the afternoon with David Gil visiting  Clement Borderie at his atelier at the hospital Charles Foix, the largest European geriatric institution. More than one person dies each day.

His work captures  time. He places the canvas over his metal, steel or copper matrix and leaves it up to nature to do the painting. After one to four seasons exposed to the elements he obtains a constellation of colors. While I was there I had the opportunity to witness the removal of the canvas. This particular piece had been outdoors during the summer, fall and winter 2005 . The canvas had turned moss green and rust.

Here he is standing next to his hommage to 9/11. The tower drips oil transforming one surface into a shiny black mirror.  The white tower absorbs the moisture from the air and freezes it. We would have had to wait another few hours for it to really turn white. As the time passes the white tower grows in thickness.

My reflection in the black mirror and next to me in the light is David Gil.