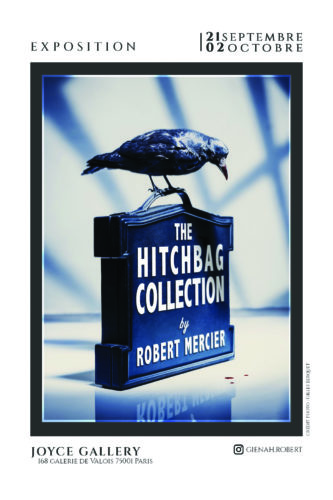 Robert Mercier The Hitchbag collection, honours the master of suspense, Alfred Hitchcock, in the current exhibition at the Joyce Gallery in Paris.

As a tribute to Hitchcock, to his cinema, to his creativity Robert Mercier created bags and art objects.

When you enter the gallery, eyes in every corner of the space are watching you, like those of Hitchcock, or rather those of his camera coming back from the dead. But these eyes are made of leather, the biggest one, bulging, which has an overview placed at the end of the gallery, is made of the same fabric of Björk’s stage costume, which had spheres on the shoulders. 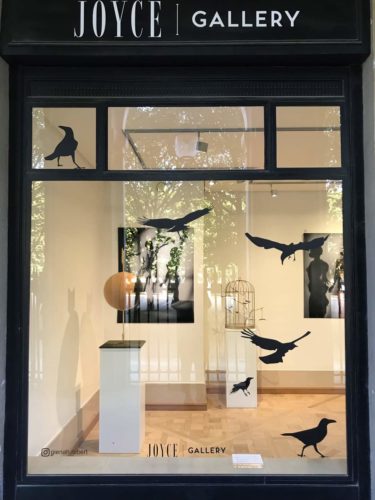 After his training as a leather worker, Robert Mercier started as a leather worker at Vuitton and then Céline. He also works for Hermès and Schiaparelli, and created Zendaya’s Balmain draped leather dress for the Venice Film Festival.

But for his first exhibition, he moved away from the big fashion houses and closer to his tastes and the first work of art he remembers, a Hitchcock movie, and he transcribed the psychology of his cinema and his characters in each object he created. The pieces are exposed on mannequins, one design is a leather waistband that drips blood on to the hips. Blood also drips from the neck where there is a choker which has raven feathers that fall to the shoulder. Another mannequin wears a bustier that surrounds the body with an imposing black leather ink stain in reference to The House of Doctor Edwardes (1945). The psychological thriller has a psychoanalyst falling in love with his patient and when Hitchock adapted the novel written by John Palmer he called his film Spellbound. The madness of this black leather garment is it slides over the body and locks it up like a straitjacket. Robert Mercier has been influenced by the vintage films and fast forwarded them to a 2021 version, bringing them in sync with our times. 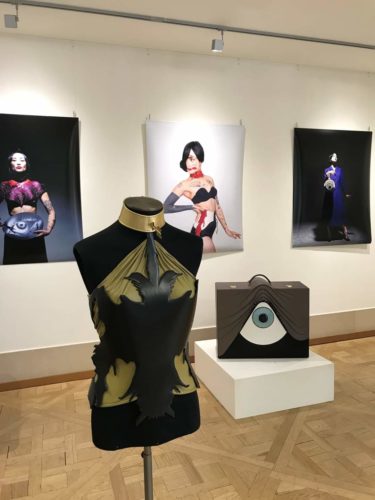 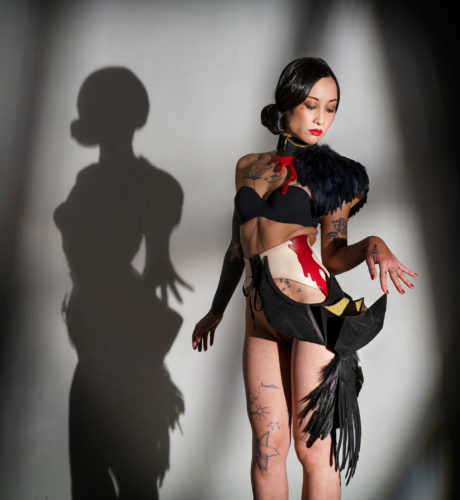 In the exhibit we find most of Hitchcock’s motifs: the eyes, the blood, the knife … But Mercier did not want violence in this exhibition,  in the films of the director, the viewer is afraid but the staging is elegant and not gory, because of the Hays Code, the code of self-censorship of American cinema established in 1930 until 1966. His collection is very feminine. Mercier chose not to limit  his own creative process, he wanted something funny, taking his cues from Hitchcock’s humour. One object he imagined was a knife box, always in leather, that we would have had as a gift if we had spent the night at the Bates Motel. Another object is a bag in the shape of an eye but totally open and made in such a way that the things you put in it will not fall out. We find the intention of the director to see inside, inside a bag, the perversion of the scopic impulse. Mercier’s unique objects are all for sale, not only as decorative objects, everything is portable and solid, Mercier wanted creations that will last in time, but marking in style. 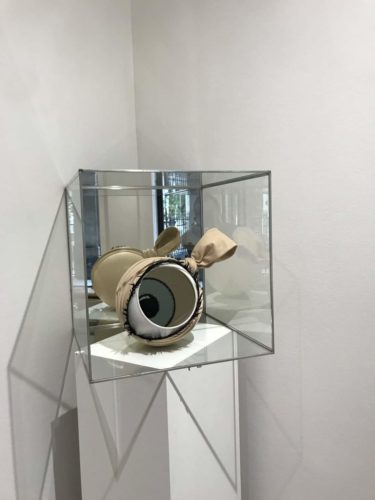 The muse of the exhibition is Lalla Morte. Photos by the erotic photographer Gilles Berquet add another layer to the exhibition. Robert Mercier did not want visual fashion rather he preferred something more artistic, where we can see the craft of someone who has always loved art. We see this woman wearing the waistband, the face multiplied, or standing ready to cut an eye with scissors which makes us think of the famous scene of Un chien Andalou by Luis Buñuel (1929), a surrealist film that inspired Hitchcock. Another photograph takes up the famous principle of the cameo, showing the house of Psycho (1960) transformed into a leather jewellery box. Robert Mercier, dressed as a woman, as Norman Bates, holds a knife like a slasher towards Lalla Morte. And the one that holds our attention the most,  because it stages the most beautiful bag of this exhibition, the Kelly of the house Hermès, pays tribute to the link between Grace Kelly and Hitchcock. With this object he symbolises the suffering of the director when one of his muses chose to renounce her Hollywood career by choosing the life of a princess. This iconic bag is this time clutched by a golden crow’s paw, the black leather is wrinkling under its claws. 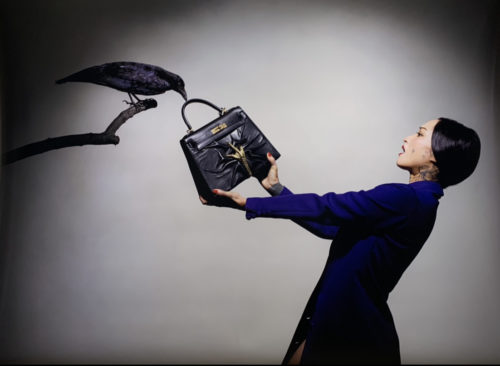 All the objects were worked by Robert Mercier from a smooth leather to which he gave different vibrations, different intentions. Like Hitchcock who was afraid of being locked into his style and who used the genre to go beyond it, Robert is not afraid but wanted to go beyond the techniques of the fashion houses he knows in his new work. In particular, he worked on a skull and crossbones made of ray skin, a very dense material that was used for certain parts of the samurai’s clothing to prevent the swords from reaching the skin. What interested the artist was to make it circular, which is quite technical and not usual. Thanks to his vast experience in the Houses where he worked he has managed to make all of the objects functional.

With this original and creative exhibition, the artist gives us the desire to dive back into these masterpieces of Hollywood cinema and to know his leatherwork as well as he knows Hitchcock’s.