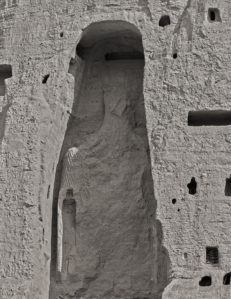 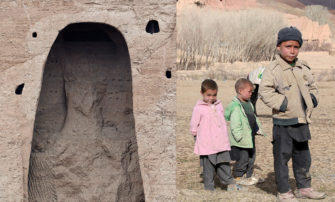 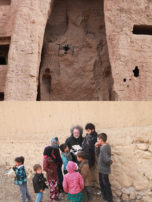 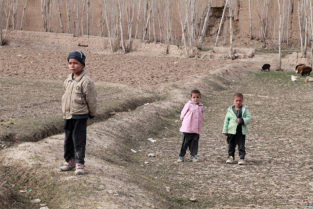 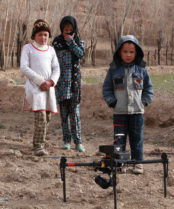 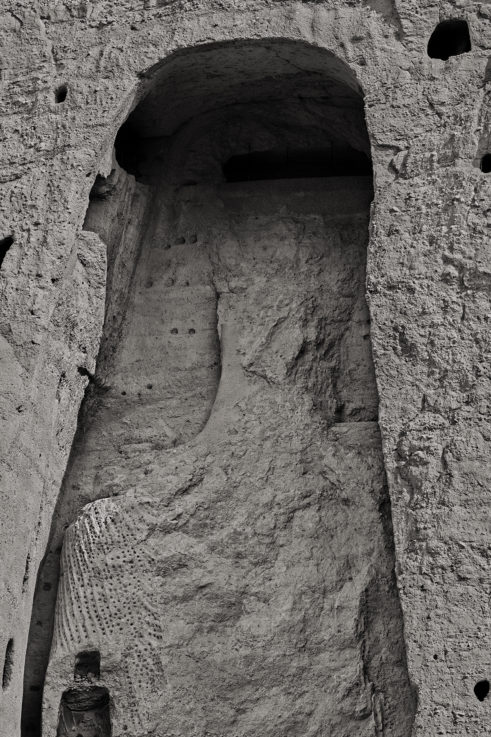 On 11 March 2001, the Taliban who had seized power in Afghanistan,
organised the destruction of two monumental Buddhas of 38 and 55 metres in height.
high, carved in the rocks of the high cliffs of Bamiyan. From
works of universal value, witnesses of the extraordinary vitality of art
of this valley, situated on the Silk Road and open to all the inhabitants of the valley.
influences, Indian, Greek, Roman… Diffused by the Taliban, the
images of destruction went around the world, six months before the images of the
twin towers of the World Trade Center in New York.

These two events marked our entry into the 21st century.
The attack on the memory of men, their heritage and the memory where they
has since been recognised as a crime against humanity.
20 years later, the Musée national des arts asiatiques – Guimet has chosen to
commemorate the destruction of the Bamiyan site through an exhibition
presenting major archaeological works found on this cliff
Afghan. Photographs by visual artist Pascal Convert shed light on the
richness of this heritage in a contemporary way.
The exhibition pays homage to Joseph and Ria Hackin, archaeologists from
Bamiyan and museum curators, who disappeared 80 years ago.

Exceptional archaeological works, mirrored by contemporary photographs
.
The MNAGG will present a series of unique archaeological works
found in this Afghan cliff, from the Gandhara to the Islamic period.
One will discover there in particular two hands of monumental Buddhas having
preserved remains of gold leaf.
Accompanying these works, the photographs of Pascal Convert, including the
Panoramic view of the Bamiyan cliff and the Bamiyan cave sanctuary
destroyed by the Taliban, will offer a more contemporary look. Through the
archaeological remains, the surveys of paintings and remains of paintings
original works, the contemporary creations of Pascal Convert, films and
archival documents presented (excavation documents, rallying letter, etc.).
from Hackin to General de Gaulle), the exhibition tells the story of the site of
Bamiyan and its cultural vitality from the 6th to the 13th century, the doctrinal basis which
led to the destruction of the site in 2001 but also the terrible news of the
made with the destruction of other World Heritage sites.
All of the works will be installed on the first floor of the museum, in the
Sino-Tibetan room fitted out for the occasion.

Overlooking the valley, the cliffs of Bamiyan are situated on one of the most
important trade routes linking Central Asia to the subcontinent
Indian. Like those in Dunhuang in China, they are made up of
loess, a material that lends itself to sculpture – or more precisely to modelling.
on an armature – monumental effigies whose surface was originally
golden.
In this exceptional place of art and culture, the first excavations were
French. Alfred Foucher, art historian and world specialist
Buddhist, has been studying the site since 1922. André Godard, architect, archaeologist
and French art historian, and his wife Yedda then turned their attention to the
first surveys of the paintings in the winter of 1923, despite the cold weather.
atrocious that raged in the valley. The exhibition displays a number of
their statements.
Preserved at the MNAAG and never shown, they reveal the liveliness of the colours
and the aesthetic achievement of Buddhist painting in Bamiyan. The
Godard will continue their work in 1924 with Joseph Hackin* then
curator at the Musée Guimet and will publish the first study on the art
Buddhist of Bamiyan, published in 1928.
New excavations will take place in 1930 under the direction of Joseph Hackin,
now director of the Guimet Museum, and accompanied by his inseparable
friend the architect Jean Carl. Back in Paris, Hackin will work on a new
publication on Bamiyan in 1933. Returning to Afghanistan in 1934, he established himself as a
in Kabul with his wife Ria, also an archaeologist, and then wrote the
the first guide to the site, which has now become one of the most important
places of Buddhist art. Joseph and Ria Hackin**, united with the city and the
have been rallying around General de Gaulle from the very first hour of
Afghanistan. In London, Joseph and Ria are invested with significant
responsibilities. It is during a mission entrusted by the General that the
Hackin find a tragic end in the torpedoing of their ship, the 24th of July.
February 1941.

*Joseph Hackin (born in 1886 and died on 24 February 1941, at sea during the
torpedoed his boat near the Faroe Islands) is a French archaeologist
of Luxembourg origin, resistant, companion of the Liberation. In 1907,
he is secretary to the industrialist Émile Guimet. He learns Sanskrit and Tibetan.
at the École Pratique des Hautes Études from which he graduated. In 1912, he was
appointed assistant curator at the Musée Guimet and in 1923, after having
continued his research work and a thesis he will become a curator.
**Ria Hackin (born in 1905 under the name Marie Parmentier, died on the 24th of December 1905).
February 1941) is a French archaeologist and resistance fighter. Officer of the Forces
As a free Frenchwoman, she participates in the organisation of the Volunteer Corps.
French people within the Free France. Disappeared at sea with her husband, in the
Following a torpedo attack, she was made a companion of the Liberation as a
posthumously and receives the war cross 1939-1945 with palm.