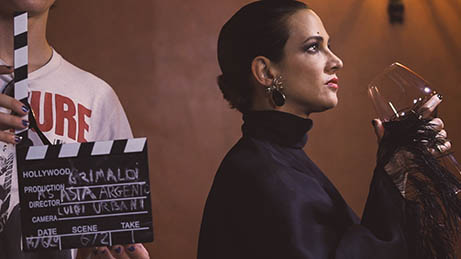 As an invited guest of the “Haute Couture On Line” in Paris Antonio Grimaldi chose film to present his newA/W 2020/2021 collection. For that he asked Asia Argento to write and direct it. AElektra is a fashion movie with theatrical tones, in the key of noir yet at the same time glamorous and that traces the myth of Electra and the conflictual relationship between mother and daughter and played by Asia Argento as the mother with her daughter Anna Lou Castoldi.

Asia has walked the catwalk for Antonio Grimaldi January 2019. Aptly this is filmed in Rome at the National Etruscan Museum of Villa Giulia and in my friend Glenn Belvario’s fave Hotel Locarno.