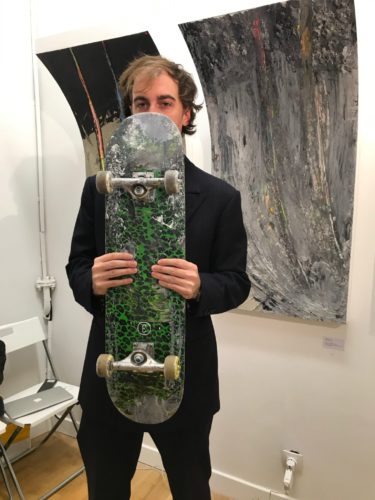 Yesterday I caught up with  Eugene Riconneaus at Asia Now which is the Paris Asian Art Fair going on until October 20th. Eugene is an artist, a photographer, a shoe designer and a skateboarder. We met in 2015 when he was doing a collaboration with Larry Clark. Eugene is exhibiting  a special project that combines his art with his skateboarding sandwiching traces of skateboard tracks over portraits that he took in China, Japan and Korea. A very strong image that I cannot erase from my mind is the trash of jaw bones that are left after plastic surgery that Korean’s do to create a V shape face to make themselves look like K-Pop stars. His work is a reflection not a judgement.  There is a text on the wall about a girl who’s parents offered her the plastic surgery. Better than me talking about him just click on the videos above.