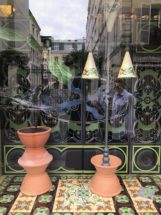 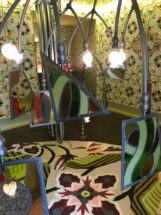 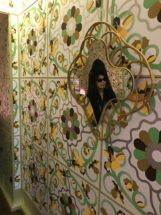 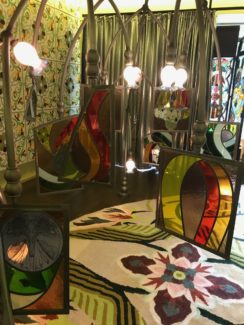 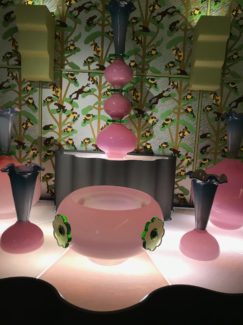 Ateliers Duchemin has been dedicated to the Art of Stained Glass for six generations. They are restoring and preserving stained glass, and they are determined to make stained glass continue as a living  contemporary art.

The Manufacture Robert Four is one of the last heirs of the Manufactures d’Aubusson raised to the rank of Manufactures Royales by Colbert in 1664. It perpetuates five centuries of tradition and dedicates the Aubusson Savoir Faire to artistic creation by producing contemporary works such as tapestries signed by visual artist Herve Di Rosa. The Pierre Marie rug was produced in collaboration with the manufacturer Robert Four.

Gamil is a Parisian workshop serving luxury, design and visual arts. They are inspired by the history of glass: from ancient techniques to technological lenses. Gamil put both these influences at the service of Pierre Marie in their “Olu Nelum” blown glass collaboration.

Émaux de Longwy is famous for its powerful imprint on the ceramics industry. The Boch family was behind the foundation in 1798 of Longwy’s Faïencerie in a former convent. For over a century, Longwy has the exclusivity of cloisonné glazes on faience. All items from the Émaux de Longwy house bear the historical stamp and are accompanied by a certificate of origin. The pottery began its third century of existence in 1998.

Founded in 1837, Poterie Ravel is one of the oldest ceramics makers in France. Its a family business which has been led by five generations in succession, who have built up an authentic and rare expertise in the heart of Provence, in Aubagne.

This is the first collaboration between Pierre Marie and the Atelier François Pouenat, a firm of metalworkers who helped produce the key piece of this immersive exhibition.

Born in 1968, François Pouenat is the fifth generation of a family of artisan metalworkers who have been perpetuating the craft for more than 130 years. François Pouenat is a true artisan, designing and creating in metal, and drawing on an exceptional family heritage of which he is the sole heir.

Inside the exhibition you can hear the sound of birds singing bringing the atmosphere of the outside inside.

Pierre Marie Agin was born in 1982 and started work free-lance under the name Pierre Marie. His drawings led him to his first exclusive prints for two artists t-shirts collections for Agnes b.

During his freelance years he worked with designers like Melodie Wolf, Yazbukey, Romain Kremer and Bernhard Willhelm. In 2008 he started a long-lasting and prolific collaboration with Hermes. He is one of the youngest active designers at Hermes.He also works with Diptyque to develop drawings for a range of perfumes and scented candles.

The exhibition is  by appointment only.

For a little personal and ancient history, Pierre Marie made the logo for the first fashion film festival of Diane in 2006,  You Wear it Well. That was the logo that preceded  the current one made by Yoanne Lemoine , aka Woodkid,  in 2008.

Edie Ashley grew up in Wales, where she gained a love for motorcycles and horses. She is currently collaborating with Bolt Motorcycles on her first clothing collection made from surplus fabrics. She has a radio show on Portobello Radio called Dirt Bike Dub.