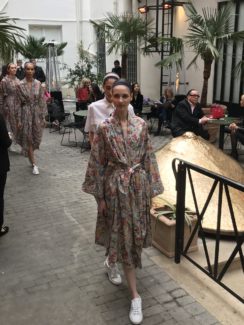 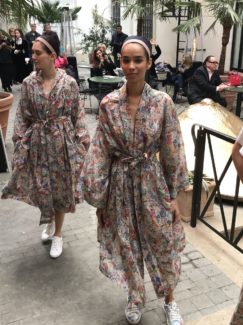 One of Azzedine Alaia’s first collaborations with artists was with his friend Cesar in 1985. Both arrived in Paris when they were very young and went on to create careers of great artistry. Both became celebrated figures in the greatest traditions of France. They shared similar sensibilities- a passion for sculptural forms revealed in light, sensuality, respect for the feminine form and both shared a love of fine art and good food.

Cesar would often visit Azzedine in the famous Alaia kitchen and prepare dinners for their friends. During one of those dinners the idea for this collaboration was born ‘impression compression’.

In the mid-eighties Cesar executed a two dimensional compression work on paper for Alaia that was printed onto fabric for Alaia’s Summer ’85 collection ‘impression compression. Cesar’s patterns and Alaia’s desins were the blend of the collective genius of these two artists.The joint label collection introduces a collection of two dresses, two shirts, a pair of trousers, and three bags that faithfully mirror the 1985 collection of Alaia’s iconic designs and Cesar’s compression fabric.