It was a dramatic scene at the presentation of Hood By Air’s FW15 collection, “Daddy.” The show took place in a dimly lit basement in New York’s financial district – virtually the bowels of Wall Street. The runway was situated between concrete pillars thick with dust and rusted nails.

Shayne Oliver’s designs continue to deliberately defy traditional boundaries of form and function. An amalgamation of sportswear and adulterated luxury, the FW15 collection is familiar, yet alien. The pieces are recognizable – a puffer jacket, a skirt, a pair of pants – but the context is inverted. The models were similarly androgynous, with faces obscured by nylon and ornamented with stylized hair. Though somewhat sinister, the makeup added a sense of caricature to the moody atmosphere.

Several pieces restricted range of motion – thick bands and intricate buckles bisected deconstructed jackets and furs at the elbows. One piece in particular prevented a model from taking large steps, as it was bound about her knees.

Set to a soundtrack by Total Freedom, the presentation concluded with a bold jazz finale after a phrase from Empire echoed through the cavernous space: “I wanna show you a faggot really can run this company.” Wait, what was that? A quiet laugh spread throughout the crowd as the music eased into a sultry melody.  Whether subverting gender norms or dissecting the basic function of a jacket, Oliver pushes the envelope to the very last second – and it is so good. 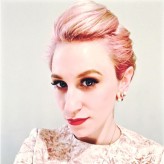