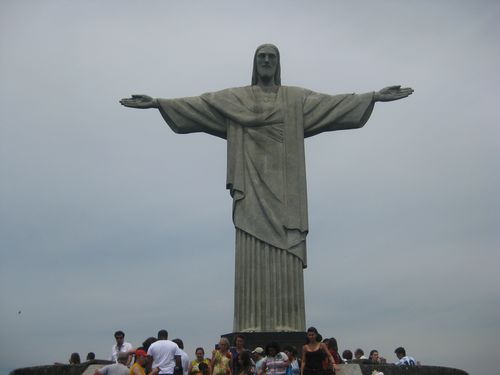 It's time once again for my annual report on Fashion Rio's fall collections, held during Rio's sun-drenched summer (and New York's bitter winter….because it just wouldn't be a trip to Rio de Janeiro if I didn't try to make my frost-bitten friends in NYC hate me.) This year, the Fashion Rio organizers at Press Pass mixed things up by taking us on excursions to Corcovado to visit Christ the Redeemer and a samba school where some of Rio's most fantastical floats and costumes where being created for Carnaval–as well as a surprise concert by one of Brazil's biggest music legends. 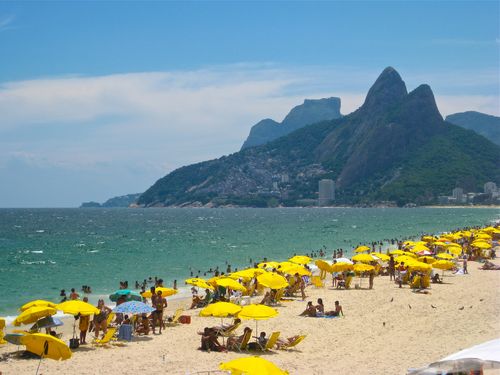 As soon as I arrived in Rio, I headed straight for the nearest (gayest) section of the storied Posto Nove beach–once the domain of commies & hippies, but now reigned over by the gays, locals from the favelas, and pasty tourists–in Ipanema, conveniently located steps from our hotel, the Ipanema Plaza. (Posto 9's history began, more or less, when Rio's exiled Senator, Fernando Gabeira, returned from France, at the end of Brazil's fascist dictatorship in 1980, and was photographed in a thong.) Posto Nove is also famous for being the yearly reunion spot of me and fashion writer Godfrey Deeny, where we spent our first day on this trip indulging in a liquid lunch of passion-fruit caipirinhas & gossip. Surprise! 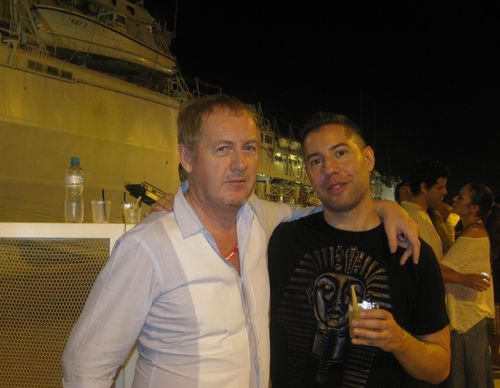 Godfrey and I at Fashion Rio's opening night party at Pier Maua, where the shows were held, before the Gilberto Gil concert. We loved the sugar-cane cocktails & delectable Carioca canapes. 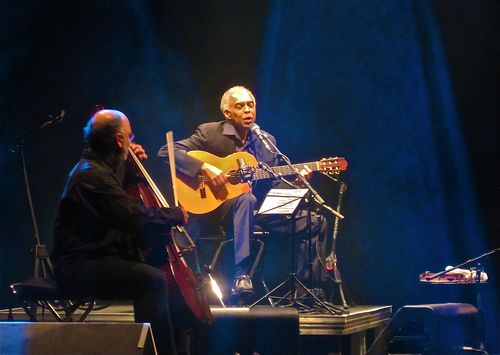 It was a rare treat indeed to see & hear the legendary Gilberto Gil perform live. The 67-year old musician/singer hails from Salvador da Bahia and is known for his innovative mix of rock, forro (a north-eastern Brazilian genre), samba, African beats and reggae. Gil served as Brazil's Minister of Culture from 2003 – 2008. 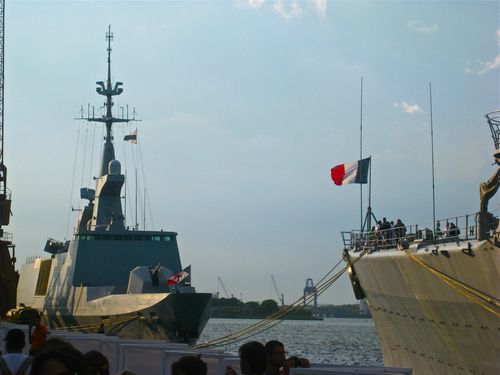 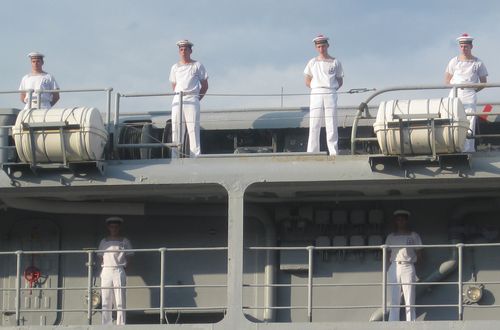 When we arrived for the first day of shows at Pier Maua, we were all rather startled to be greeted by two French warships, complete with red pom-pomed French sailors. It was certainly a stark contrast to last year's show setting in the serene Marina da Gloria. If one were to resort to the lazy lingo of 20-somethings, the warships seemed a bit "random." But of course if one digs, there is an answer for everything. Godfrey, the resident hard-news hound in our press group, had the scoop. The day the French ships appeared in Rio's port, it turned out, was the day that President Nicolas Sarkozy, a big supporter of Brazil, called for the South American nation to have a permanent seat on the United Nations Security Council.

And now a word on the matter at hand: the fashion shows. According to a piece in the Global Language Monitor, Rio recently went up 12 notches on the pret-a-porter ladder and is now the 18th top fashion capital of the world. (Similarly, Sao Paulo went up 25 notches and is now the 8th most important fashion capital). Both cities' fashion weeks are under the new management of Luminosidade, a company that is part of a Brazilian lifestyle and entertainment conglomerate. Says Luminosidade president, Paulo Borges, "This is an important movement towards the consolidation of a project that began 15 years ago, to structure Brazilian fashion within a global and increasingly competitive market." This combined with Rio's 2016 Summer Olympics bid victory and a booming, emerging economy, Brazil is clearly having its moment on the world stage. (As a Champagne Socialist, I for one would love nothing more than for Socialist Brazil to usurp the ailing United States position as ruling world power.)

Of course there is considerable irony surrounding a fashion week in Rio de Janeiro, a city where 99% of the residents spend most of their waking and sleeping hours naked or nearly naked. Yes, these were fall/winter collections, but bear in mind that winter weather in Rio is about the same as New York's June. So, it was slightly disorienting to see some heavier fabrics, including some knits, in dark colors pop up on Rio's catwalks. Who is wearing this stuff? Jet-setting dinner party guests invited to Roman Polanski's frosty Gstaad chateau? Other collections were suitably lightweight and, if not exactly beachy, will make a statement on the dancefloor (i.e. Auslander, more on that).

The overall vibe of the week ranged from smart, polished pieces ready for New York (Juliana Jabour) to, it must be said, lines that looked like either Balenciaga for JC Penney, the Walmart version of Marc Jacobs's 1993 Grunge collection, or Halloween costumes from Duane Reade–not that there's anything wrong with that. (In Mr. Blackwell fashion, a friend of mine pronounced one velvet, chiffon & glitter-caked collection "a Midsummer Night's Nightmare.") 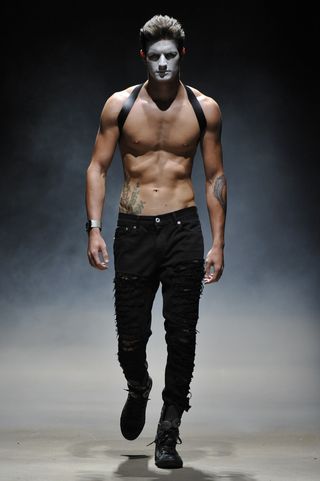 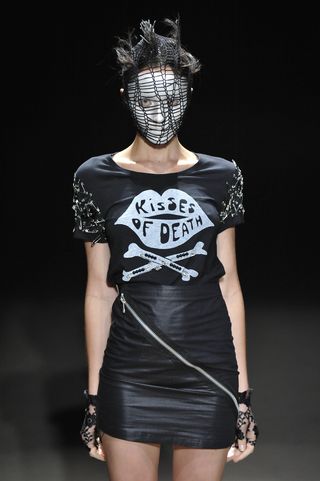 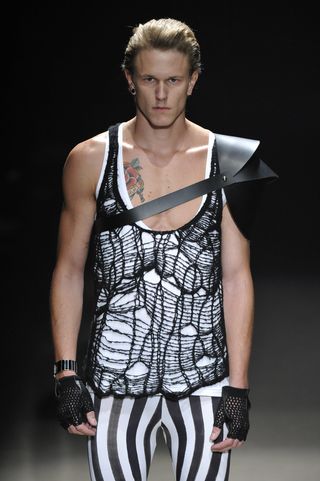 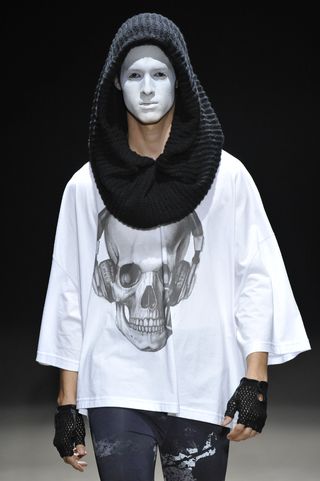 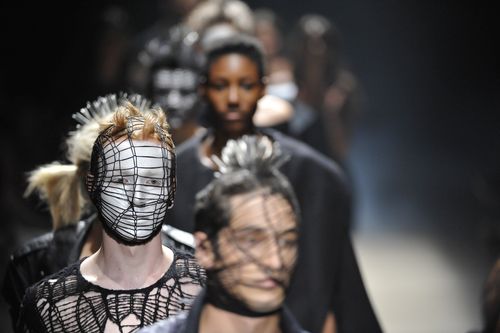 As a sucker for trashy goth style, it was hard for me not to love this collection from Rio's resident hipster brand. If the MisShapes and their ilk ever end up in political exile in Rio, far from the racks of Beacon's Closet and Ina, this is what they would wear. Auslander's look for fall is Gareth Pugh meets Alien Sex Fiend, accented by a few t-shirts with droll slogans ("Porn is the New Black"). This peculiar punk gesture–the Goth from Ipanema, if you will–is the ultimate antithesis to Rio's upbeat beach culture. If a revival of the early '80s London club The Batcave ever occurs, this collection demands a Lapa outpost. 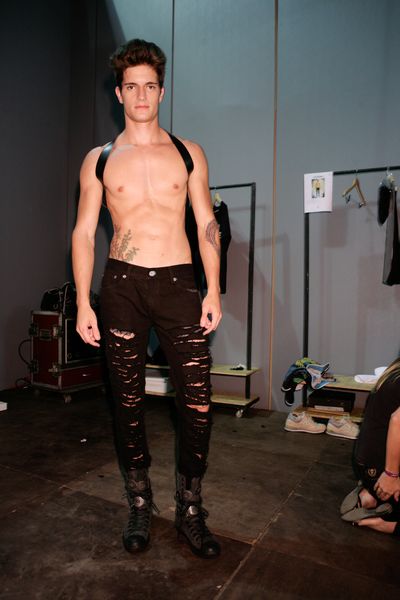