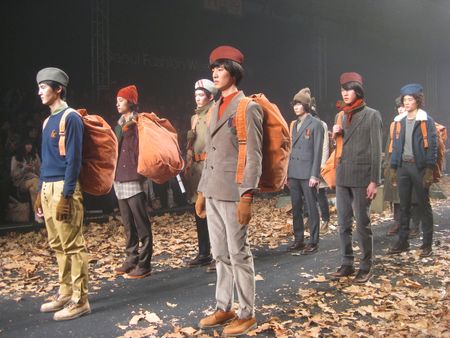 Above: The Koreans go camping in style

After 080 Barcelona and a 3-day holiday in Turin, I decided to accept an invitation to attend Seoul Fashion Week–partly because I'd never been to Seoul and hadn't been to Asia in five years. But truth be told, the main reason I was lured to Seoul was because I was planning on attending the opening party of Rem Koolhaas's Prada Transformer–only to find out at the last minute that PT was being postponed till April 25. Boo!

Let me be frank here: Seoul Fashion Week is really only about the menswear collections, some of which were excellent. The women's shows–derivative and uninspired–gave many of us an excuse to catch up on our sleep. Perhaps the Koreans are seeking to emulate the Japanese avant-garde, zen fashion aesthetic: At the Seoul women's collections (and some of the men's) the models walked in slow-motion to enervating, ambient music that did nothing to lift our spirits in the midst of recession-mania. (At one menswear show, which featured dirge-like music, I fell fast asleep and almost toppled from my front-row perch onto the runway, only to be awakened by a model's wool sleeve brushing against my nose). Worse was the women's show that featured music by Celine Dion and clothing that only belonged in a catalogue, not on a runway. Memo to Korean womenswear designers: Fashion shows put on for the international press should never be square–unless you're doing it ironically.

Seoul Fashion Week also gave foreign buyers an opportunity to debunk the global downturn and to engage in a pissing contest over which countries actually have "healthy" economies. Lebanon, I was told by a woman who owns four shops in Beirut, is actually "doing quite well economically." India's economy is apparently growing in leaps and bounds (but don't tell the slumdog non-millionaires that). Pity was cast on the poor U.S. ("It will take at least three years for their economy to recover") while doomed Dubai has been practically left for dead. If only Richard "I've got some meth in me pocket!" Quest of CNN was there to ask all the tough questions and kick some ass.

But enough about the depressing world situation. It's time for a little fashion escapism. Here are some of my highlights from the Seoul men's collections.