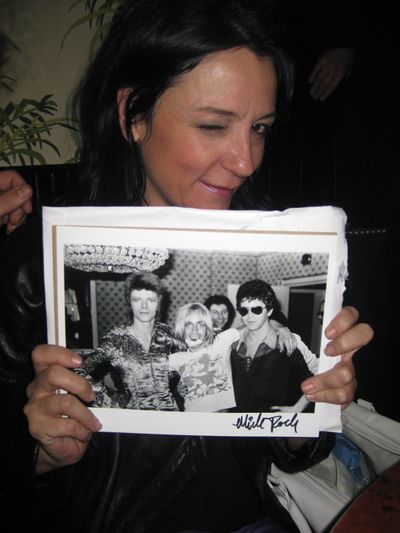 I'm still recovering from last night's bacchanal, Kelly's birthday celebration at Southside, a new-ish club that lies smack dab in the middle of Little Italy and Soho. When I arrived with Carol Pope for what I thought was going to be a low-key event for Kelly's inner circle, I was met with a curious sight: all of the lights in the main room of the club were up and camera crews, PAs, and very LA-looking girls with clipboards were scrambling around the room, plugging in cameras and microphones and directing people whom I did not recognize. Said people were dressed as caricatures of what you would expect to see on a Hollywood-produced TV movie about "club life in NY" during some indeterminate decade. Maybe the '80s, maybe 1999, maybe now? There was a couple dressed outlandishly as members of a late '80s hair metal band, complete with tight, striped pants and top hat, and girls dressed like they were walking the Hollywood strip, not attending a NY party where most people would be in black leather, Margiela, Raf, Preen, vintage monkey fur, and Ramones t-shirts. I spotted Roxanne Lowit across the room and she looked perplexed.

"What the heck is going on here? Who are these people??" Adrian Cowen of Pleasure Principle asked me as he walked in. "Are we on bloody 'Candid Camera' or something?!"

We all ran into a dark side room and huddled together like cockroaches hiding from bright lights. We laughed because Kelly was nowhere to be found. She also didn't mention that a filming would be going on at her birthday party. It almost felt like an elaborate trap, like Kelly was Truman Capote in "Murder by Death."

"I'm scared," Carole said. "Why are they playing Lionel Ritchie?" 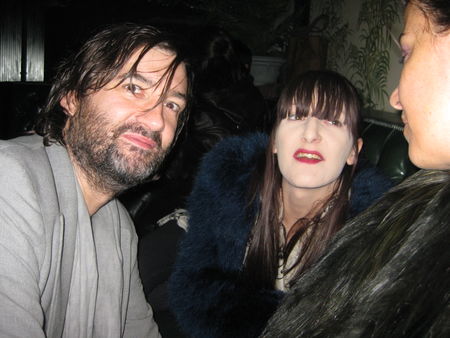 Smile doll, you're on Candid Camera: Adrian Cowen and friends in the non-LA VIP Room. 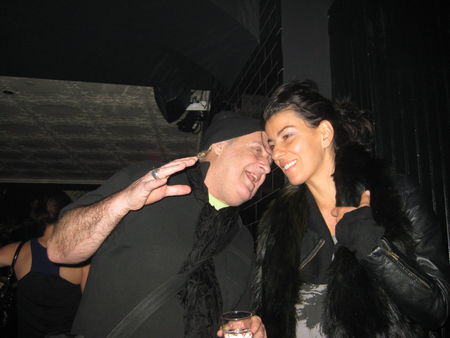 Bruce Benderson tries to convince Diva Pitalla that she and Adrian should hire him to be the model for the next Pleasure Principle campaign. That sounds like a job for Diane Arbus! 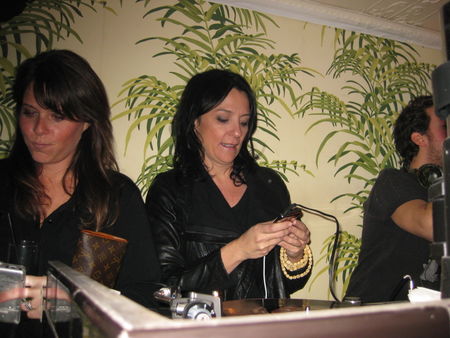 Above: I'm so used to seeing Kelly not wearing any makeup that I thought she was Michael Schmidt when I first spotted her.

At this point I was full of vodka bravado, so I ventured out of our VIPish room and dove into the Hollywood film set mosh pit in search of the birthday girl. I asked one of the blonde clipboad bearers what the heck was going on and found out that they were filming an episode of the new spinoff of "The Hills" (which Kelly appears on as the tough-love boss of Lauren Conrad) called "The City." I then noticed that the entire cast of "The Hills" were all at the party! (Okay, I was guessing. I've never watched the show…only the clips that Kelly has appeared in that were up on Gawker a few months ago). 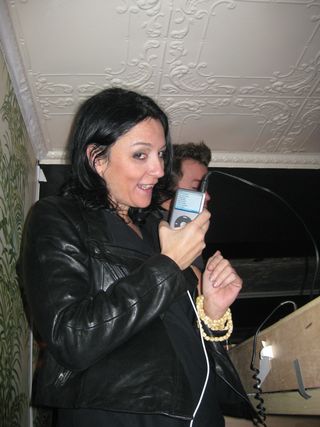 Above: The DJ du moment. When I jumped into the booth with Kelly and asked her about "The City" filming she was all like "What filming?" 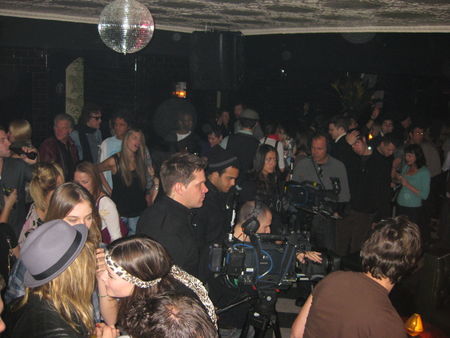 View from the DJ booth: A filming frenzy. See Mick Rock waaaaaay in the back? You know, he's working that kind of Tom Baker as Doctor Who look but with cool sunglasses. 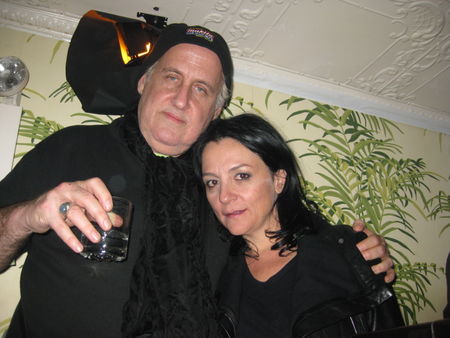 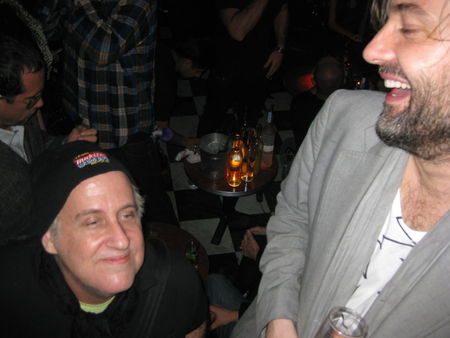 "Haha, you're so funny Bruce! Okay, you can take your hand out of the front of my underwear now…..oh wait, that feels kinda good…..no, I was kidding, stop it! Don't! Stop! Don't…..stop…."

I wonder if Kelly's forever-young friend noticed that hunka hunka burnin' love in the white t-shirt checking her out? 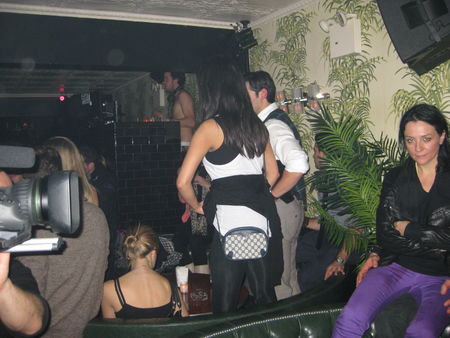 It didn't take long for Kelly to jump out of the DJ booth and jump in front of the TV camera. Omigod, I just noticed that the new DJ took his shirt off! No one told me this was gonna be a fag party! 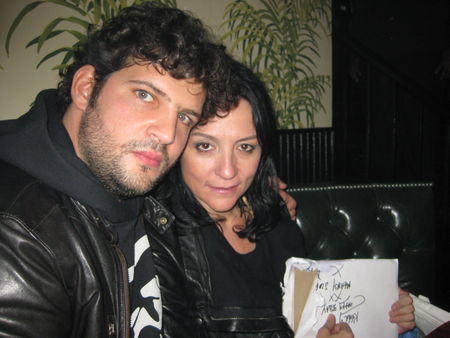 Southside owner Anthony Martignetti and Kelly in the VIP booth

By this point I was pretty blotto (my drinks were on the house) and Bruce and Adrian and the rest had left (lightweights!) Somehow I found my way over to Kelly's booth and she immediately poured me a vodka and cranberry in a ridiculously tall glass–it was strong enough to paralyze the entire Chinese People's Liberation Army.  I plopped down in the booth, not really noticing all the camera and microphone wires coiled around the table and everyone's ankles like cobras. I was crushed against some guy who seemed to be in middle of a mild nervous breakdown. I soon learned it was former RADAR editor Maer Roshan. "Don't believe everything you read," he said presumptiously about all the bitchy press he's received over the years. Or I guess that's what he meant. We chatted a bit about his upcoming "move" to LA, a 3-or-4-month sabbatical where he is going to "relax and get my thoughts together."

"You should go to Ipanema if you want to chill out, darling, not pretentious LA. The beaches are divoon in Rio," I offered pretentiously. I couldn't help picturing him having a Woody-Allen-in-Annie-Hall LA neurotic reaction after being out there for a few weeks. He'll be ordering mashed yeast at some hippie-dippy health food restaurant and rejecting someone's assertion that NY is "a dying city"….and getting back on the next JFK-bound flight, pronto. 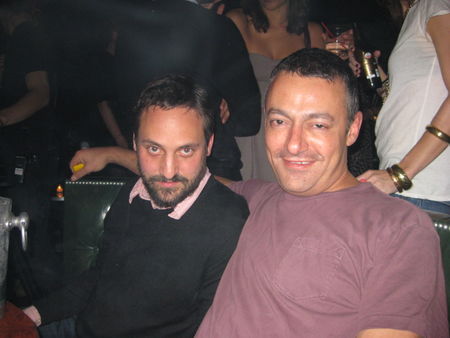 Maer Roshan (right) and his handsome friend whose name of course I can't remember. Call me! Whoever you are. 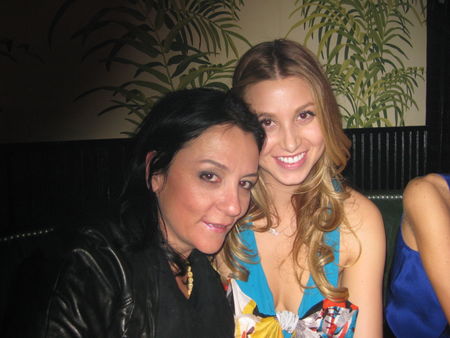 Above: OMG, OMG, OMG! It's Whitney Port aka Whitney of "The Hills"! I totally xoxoxo her!

When Whitney made a cameo appearance in our booth, Maer Roshan began battering her with a battery of probing questions: "What's it like working for DVF? Is DVF a mean boss? What do you really think of DVF?" And Whitney was all like,"Haha, yeah, DVF rocks!" When she got up and left it was then that I finally noticed that a camera had been pointing at us for over an hour. "Wow, I just realized we're being filmed!" and Maer just gave me this "DUH!" look. Oh wow, I'm gonna be on "The Hills"! Oh wait.."The City"! "Glenn Belverio and The City"! Maybe I'll be able to start my own fashion line after my debut! No, cosmetics! Those are better for a recession.

Nevermind that they'll probably use about 20 seconds of footage from the entire night's filming on the show. 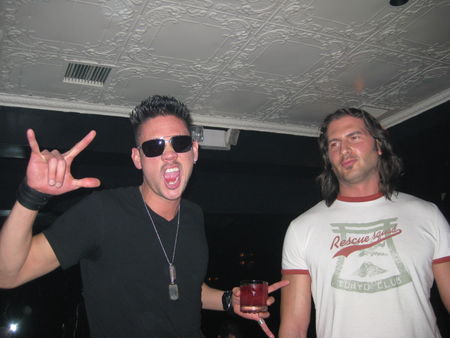 Things got a little surreal when Mr. Sunglasses cozied up with me in Kelly's booth. Everyone had vacated the booth at that point but I can't remember if the camera was still trained on it or not. I thought maybe this guy was just an actor hired to give the party some "ambience" for "The Hills" viewers…but he kept insisting that he knew me, that he had met me several times at fashion shows etc., but I really didn't know him from Adam+Eve. I was so drunk at that point that all I could do was smell his hair which smelled pleasantly of the Dippity-Do that I used to use when I was a punk back in the day. When he couldn't give me a straight answer about what hair product he used, I ditched him. New York nightlife is so intellectually stimulating! 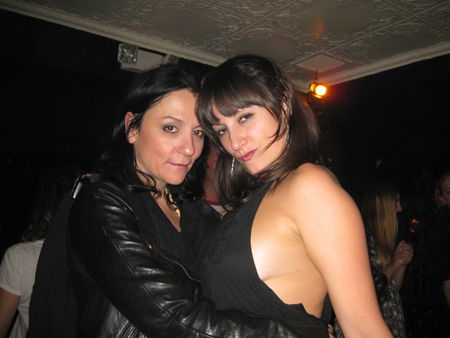 I headed for the dancefloor and danced the night away with Kelly and friends. The last thing I remember is some nerdy-cute little guy from Palermo stroking my pewter calf leather Pierre Hardy shoes to the beat of a Billy Idol vs. Beyonce mash-up. Crazy, crazy night. 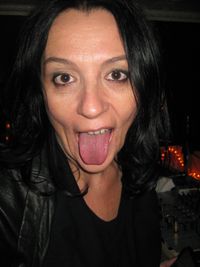