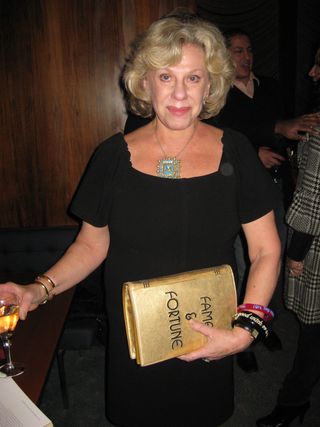 Above: Zipless fucks were on the menu at the Four Seasons: "Fear of Flying" author Erica Jong and her unique pocketbook.

The Manhattan fall party circuit continued undeterred on Wednesday night despite the Wasilla-like weather that brought out ill-advised minks as well as frisky, fashionable minx. Our first stop was the vaunted Four Seasons in midtown for the launch of a new photography book from Gloria called simply "New York." The limited-edition, handcrafted, silk-bound, 2-foot tall, 25-pound tome features photos by, among others, Norman Parkinson, Helmut Newton, Ron Galella, Weegee and, one of my personal favorites, Jerry Schatzberg (I interviewed Jerry at his home here in NY for DUTCH magazine back in 2002. I'm a huge fan of his films, which include the cult classic "Puzzle of Downfall Child" and "The Panic in Needle Park"). The champagne flowed freely and the canapes were simply divoon. 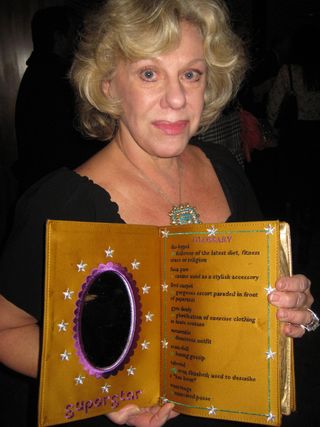 One of the highlights of the evening was my intimate chat with Erica Jong. Here she shows me the inside of her rather eccentric handbag which included a "superstar" mirror (in case one forgets who one is) and a glossary of social terms and definitions such as "tabvoid: dull gossip." (I can't think of anything worse!). Erica informed me that she got her bag at Blue Tree, the Madison Avenue boutique owned by none other than Phoebe Cates. 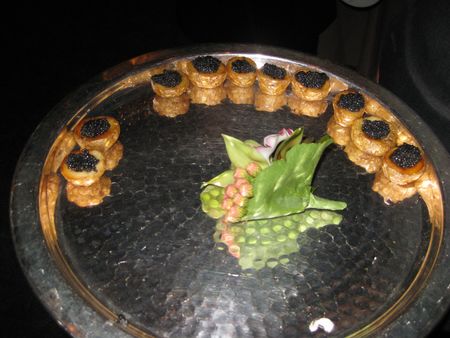 For a brief moment some toasted baby potatoes topped with mounds of luscious, high-quality caviar appeared on the dancefloor (nevermind there was no music whatsoever). But! When news rolled into the kitchen about a precipitous drop in the Japanese stock market, the caviar canapes abruptly vanished. It didn't bode well for the future of fiesta-loving freeloaders such as myself and Sylvia Miles. 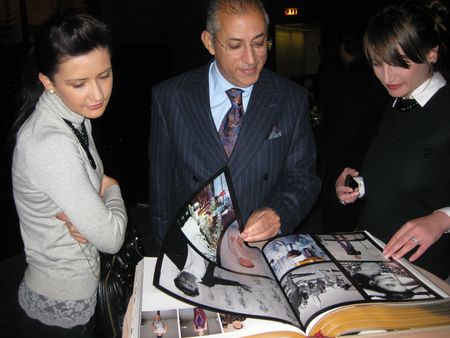 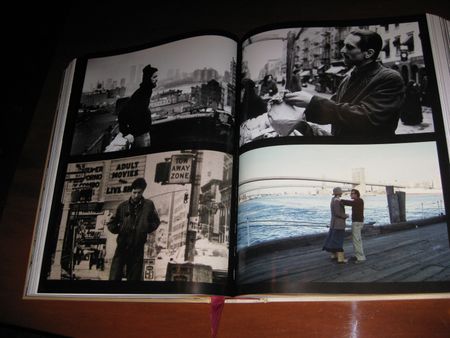 I almost forgot about the book! Above are two shots of the unwieldy collectors item. 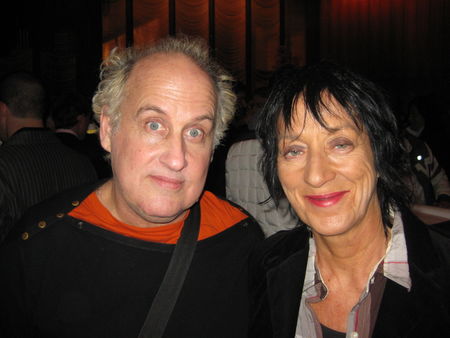 Above: Bruce Benderson and Carole Pope at the Four Seasons

The next stop was the TAR magazine launch at the J. Lindeberg residence down on LaGuardia Place. Unfortunately, this felt more like a dead end than a stop on the party circuit. The door scene was a ridiculous nightmare with rude bouncers and clipboard-wielding gatekeepers who weren't letting anyone who was on the guest list in. Having been to about 20,000 parties in NYC over the past 2+ decades, I really didn't have the patience to wait out in the cold for something I was going to cover and give publicity to. And while Bruce Benderson's state-of-the-art iPhone was able to read our I Ching, take our blood pressure, and predict the exact day and time that the world will end, it was unable to perform the rather pedestrian task of calling the publisher inside the party who had the power to get us in. But Bruce saved the day with some good ol' fashioned, non-technological New York moxie by commanding one of the door girls to let us in. She had the choice of letting us in or having Bruce chew her Marc Jacobs-jacket-clad arm off. She chose to keep her arm because, well, it's just such a bitch sending "OMG, are you watching Gossip Girl?!" text messages with only one hand. 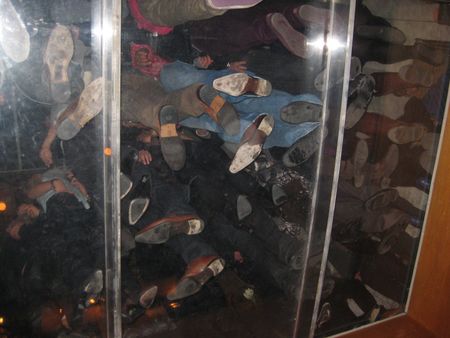 Above: Plexiglass floor at Lindeberg's pad. This is why Mrs. Vreeland advocated that people shine the soles of their shoes. 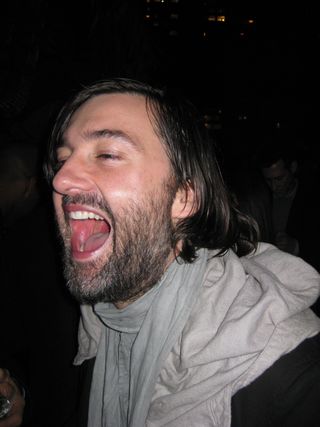 The party didn't totally suck, despite the lack of famous people (Benicio Del Toro by Julian Schnabel on the cover of the mag but neither one at the party = lame launch party). Some of my friends were there, like Adrian Cowen (above), one-half of the fashion design team Pleasure Principle. I tried to reach him but to no avail (I must have been using Bruce's iPhone) a few months ago while I was watching "Access Hollywood" and sipping a mint julep. Janet Jackson was being interviewed about her new line of G-cup bras, or something of that order, and she announced that the collection would be called "Pleasure Principle"! Talk about a wardrobe malfunction. I was completely gobsmacked, as Adrian and Diva Pitalla have been doing their Pleaure Principle line for over 5 years now. Long story short, Ms. Jackson received a legal letter and she is no longer using the name. Score one for our team! I cracked to Adrian that Janet probably hadn't heard of either Gary Numan or Sigmund Freud. You know how bitchy fags can be. 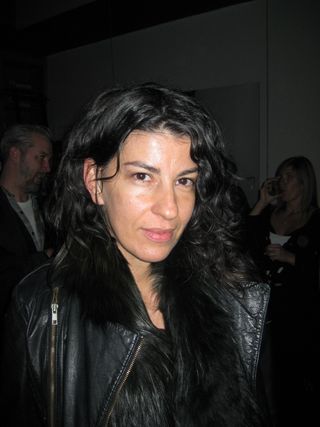 Above: The sultry Diva Pitalla 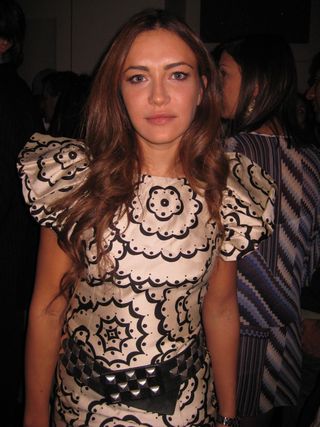 We loved this girl's dress. She told us it was vintage '80s from her mom's closet. 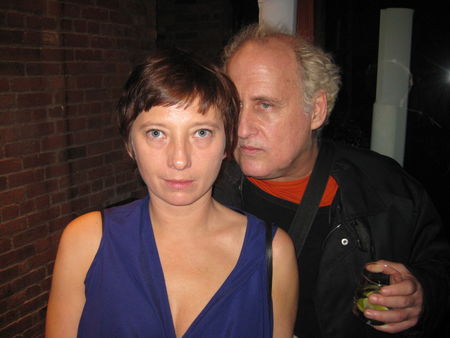 TAR's premiere issue is pretty interesting. The art/fashion mag has a piece by Joan Didion whose book "Miami" I loved, an article about Che Guevara which I want to read because I am an unapologetic Che supporter (he is represented well in my Mao Room), and an interview with some guy named Casey Neistat whom I've never heard of but there's a photo of him shirtless and he has a nice body. They should have hired him as a go-go dancer for the party to liven things up. 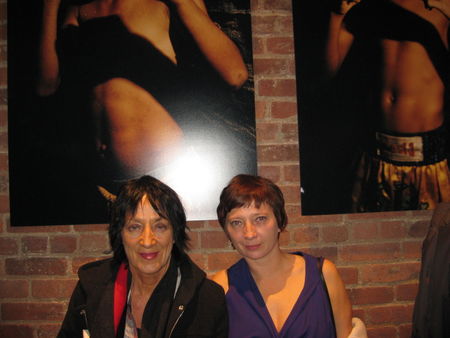 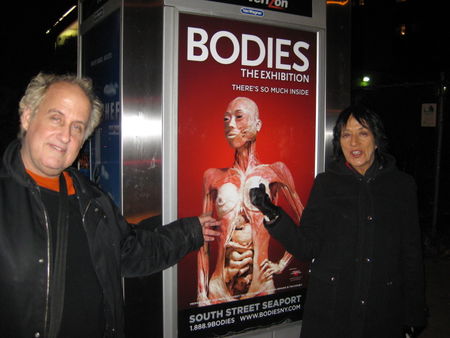 This dissected body basically represents how we felt after the TAR party door ordeal. 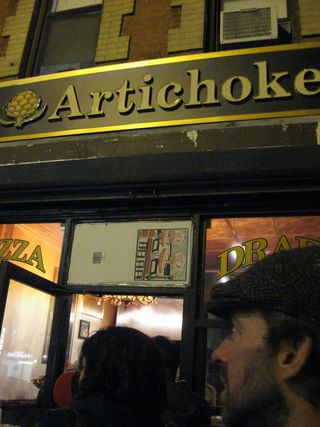 After the party we headed over to Artichoke Pizza on 14th Street, the Staten Island Italian-American import food phenomenon du moment where there is always a line, from 10am to 4am. It's that good! 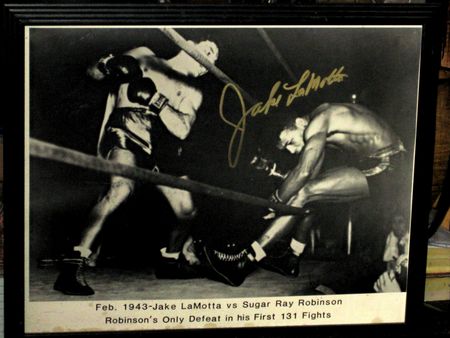 Were you expecting a photo of the pizza? This photo of Sugar Ray Robinson in Artichoke's window is just as mouth-watering as the joint's signature super-creamy spinach and artichoke slice. Who cares if Robinson lost this fight? 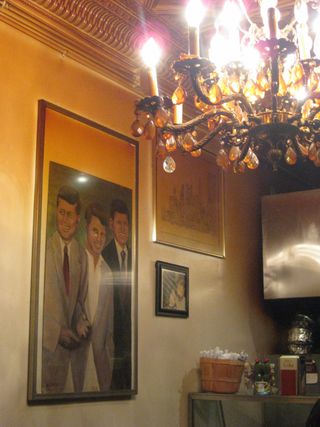 Above: Inside Artichoke: Folk-art Kennedys illuminated by chandelier light.