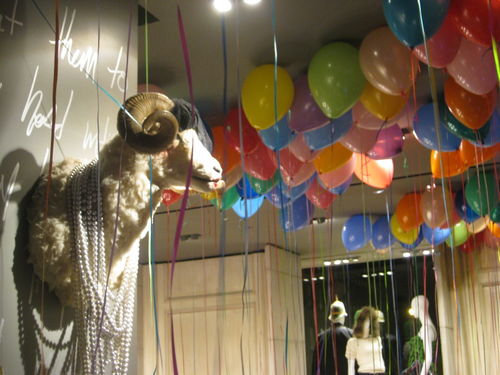 Somehow I managed to get invited to the uber-exclusive opening of New York's new Juicy Couture flagship on Madison Avenue by power publicist Nadine Johnson. Yes dolls, New York still knows how to throw a party despite the rotten economy and this was definitely the soiree of the season. JC's new space is positively beautiful and the bash's general vibe seemed to ride on the ecstatic Obamamania wave from Tuesday night, albeit in limousine liberal fashion. There was endless champagne. There were foie gras canapes. There was caviar, there was swag. There were BBQ beef buns! And there was Martha Stewart. It was a great night to be a New Yorker and an American…as long as you were on the guest list, darling. 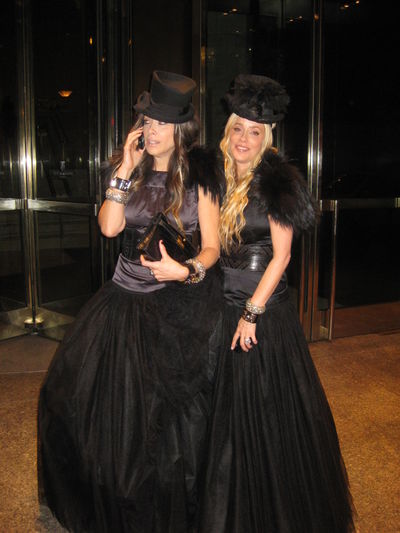 Above: Juicy Couture founders Gela Nash-Taylor (yes, she's married to Duran Duran's John Taylor) and Pam Skaist-Levy en route to the party, having trouble arranging a car. But! In the era of the New Humility there was no "Don't you know who we are?" Oh no.

Before the party, I met my friend Michelle for drinks at Le Colonial for some pre-game cocky tales. As we were walking along 57th street on the way to the party, we ran into these two gals (above) and at first I didn't recognize them. We were still blocks and blocks away from the store. "Wow, you gals look super, where are you going?" I asked.

"We're opening our new store tonight and we can't get a cab or a car!!"

"Whoa, wait a minute…..are you Pam and Gela from Juicy Couture???" 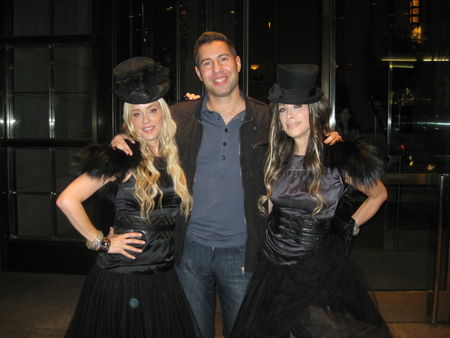 Above: My pre-party prelude with Pam and Gela. 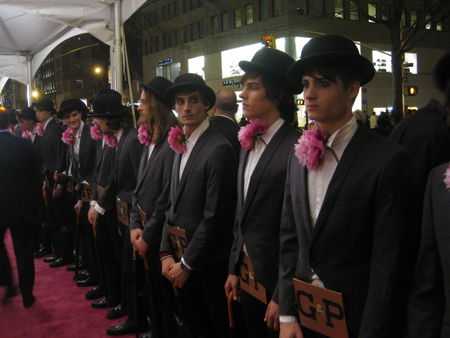 Divoon boys in bowlers lined up on the red carpet. Love the G&P (Gela and Pam) crotch shields! 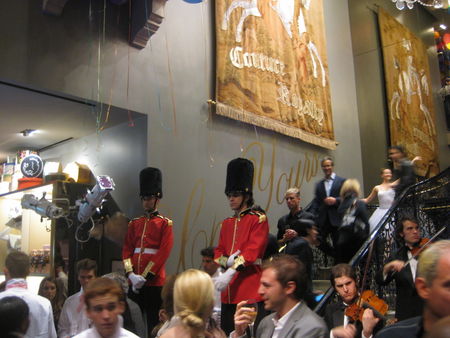 Are those moonlighting FAO Schwartz doormen I see? 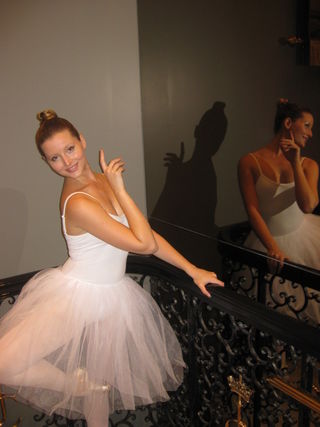 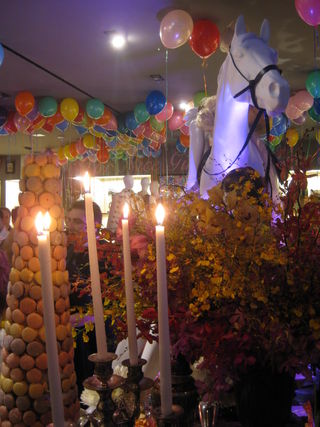 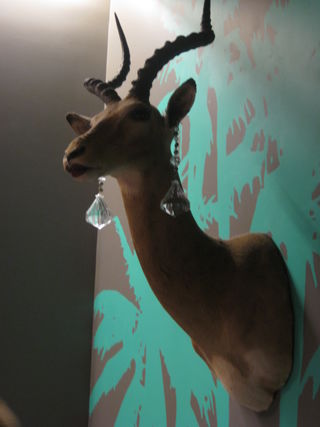 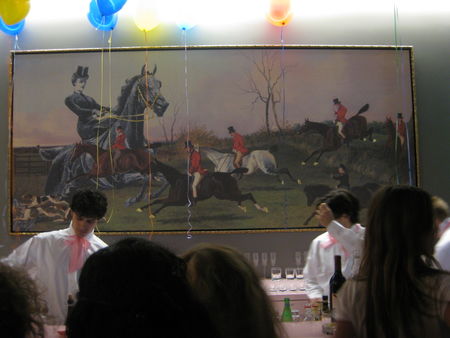 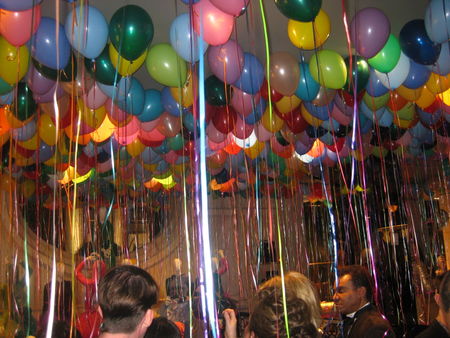 As you can see, the store's decor and party theme can be summed up in one screaming, crime-scene headline: "GAY CIRCUS CLOWNS STAGE GUERRILLA DECORATING MAKEOVER AT RALPH LAUREN FLAGSHIP"

And now let's take a look at some of the guests. I know the Shaded Audience will be devasted to learn that I didn't manage to get any photos of the cast members of "Gossip Girl," all of whom were in attendence. But I did capture a few old-school favorites AND I was the first to identify a new NYC social trend…. When I asked the glowing Martha Stewart (such beautiful skin!) if I could take her photo, the suspiciously pleasant craft goddess's reaction was kind of like, "Aw shucks, you want to take a photo of little ol' ME? What for? I mean, I'm no one really. I'm just an average Polish-American potato peeler. But okay, you seem like a nice enough fella."

I'm calling it the New Humility. You heard it here first, kids. And Obama's wonderful acceptance speech is to blame for it. The man oozed humbleness and humility through the entire speech; never once did he gloat or display one iota of winner's arrogance. And it's this valiant attitude of humility that has been adopted by New York's normally egomaniacal A-listers. Wonder how long it will last? 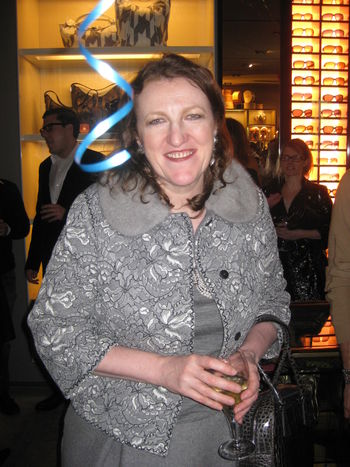 I thought I was imagining things with Martha, until I ran into Glenda Bailey, editor-in-chief of Harper's Bazaar (above). She was all, "Ooooh my! You want to take MY picture? But I'm a total NOBODY! Well okay, if you insist." Can you imagine Carmel Snow reacting that way? No, no I can't. 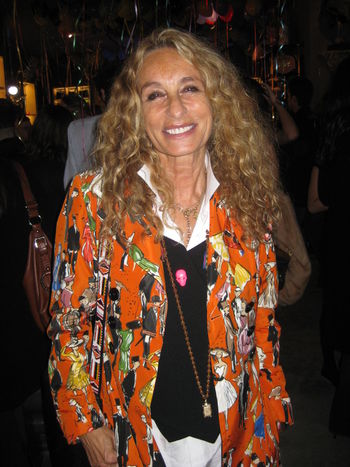 Because the cute waiters refused to stop pouring champagne into my mysteriously always-empty flute, I was a bit tipsy by the time I made it to New Humility example #3, above (which officially makes it a trend). I thought she was Franca Sozzani from Vogue Italia (there is some resemblance, si?) Her reaction to my photo request was of the Extreme Humility nature. It was something like, "Oh no, no, no! Why me? I don't look like I belong here. What am I even doing on Madison Avenue? I should be in New Jersey…on the boardwalk in Asbury Park begging for change to buy a hot dog. Pleeeeeeeaase, I am not worthy! Well, if you insist." Turns out this is actually socialite Ann Dexter-Jones, who is married to Mick Jones of '80s rock band Foreigner. The fact that it was Ann D-J made this flagrant display of humility even more mind-boggling! I say this because back in the late '90s, Ann was a colleague of mine (even though we never saw each other) at Hamptons Country magazine where I worked as a fashion editor. Ann wrote a ridiculous "society" column where she came off as one of the silliest, self-absorbed people that you'd never want to run into at a Cynthia Rowley clambake or elsewhere. But of course I am being unneccesarily unkind. The world is a different place now and the conspicious consumption of the late '90s is a thing of the past. Ann's social scribblings were perhaps just a symptom of that moment in time's collective narcissism. Now we shall all wear our humility like a badge of honor, just like we wore our $2200 Jil Sander sweaters back in the day! 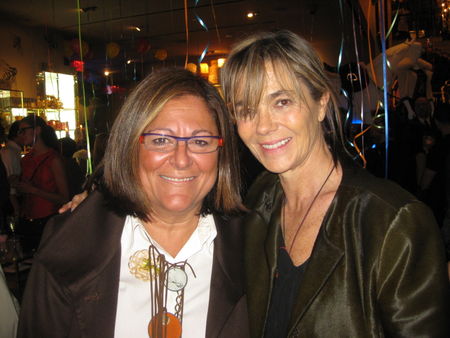 The New Humility took an aggressive turn when I asked Fern and Nadine for a photo. "Honey, WHY do you want to take OUR photo?!" Fern growled at me. "WE'RE NOT FAMOUS." Well, certainly not Gossip-Girl famous, I'll give you that, Fern. I'll never forget the time I accidentally sat in your seat at a John Bartlett show (I was supposed to be in standing) and you called me out in front of EVERYBODY. Talk about humility. 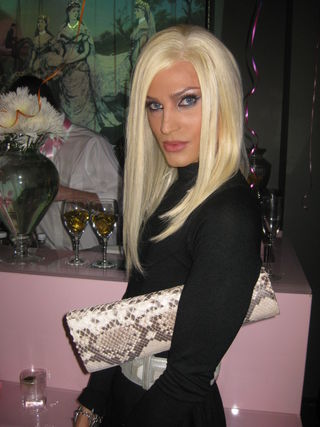 There was an amusing moment when Faran Krenctil of Nylon magazine gushed and drooled all over Phillipe Blond's not-out-yet Christian Louboutin for Rodarte shoes. She actually thought Phillipe was a real woman! So suburban of her, I mean really. In other news, Phillipe is designing the costumes for Britney Spears's "comeback" tour. Coup-coup! 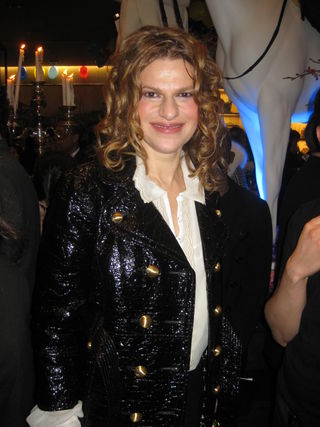 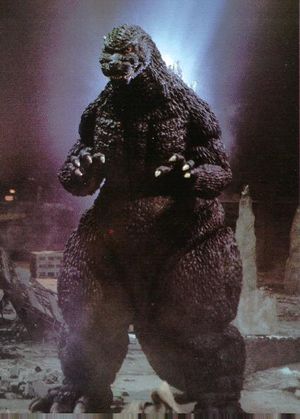 Above: Separated at birth: Sandra Bernhard and Godzilla

The New Humility came to a screeching halt when I ran into Sandra Bernhard.

Me: Yeah. I had dinner with her and Michael Schmidt back in the '90s. She thought I was trying to steal her girlfriend! Lesbians can be so neurotic and possessive sometimes.

(I take photo of Sandra)

Sandra: Oh, uh-uh, no! No way, man. I'm not talking to her anymore, no way! She defended Sarah Palin, I mean that was it baby, it's over!

Michelle: OMG, what's going on?? Why is Sandra Bernhard yelling at you?!

Sandra (still breathing fire): Uh-uh, she blew it. Her defense of Sarah Palin, that was the last straw, she blew it, baby!

Michelle: Glenn, I didn't know you were friends with Sarah Palin!

(At that this point, Sandra is foaming at the mouth and everyone is staring in bewilderment. She walks away from me, stops, turns around, and starts yelling at me again).

Sandra: She REALLY blew it, okay? BLEW IT!

Michelle: Why is she so tall?? She's too tall!

Me: Yeah, and that scaly jacket makes her look like Godzilla, doncha think? Oh look, that waiter has some pigs in a blanket. Yum! 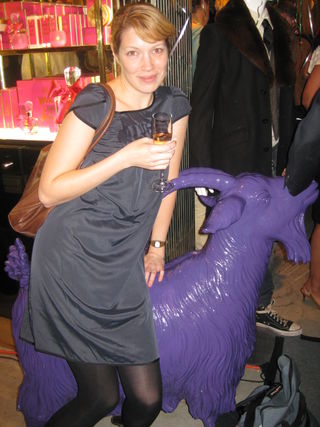 Above: After a few glasses of champers, Michelle thought she was riding on Chace Crawford's back. Oh, behave! 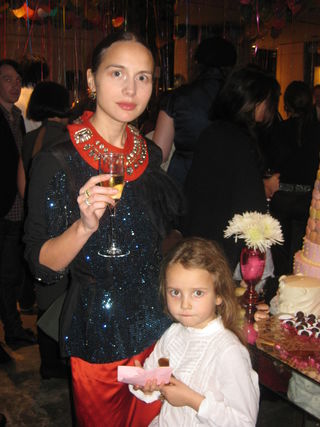 Above: "Mommy, are we gonna end up on Gawker? Do not want."

Chic moms were encouraged to bring their kids but it didn't change the very adult vibe of the party. Instead of dragging us down to a juvenile level, these rah-ther sophisticated New York children behaved with class and decorum. No Eloise-at-the-Plaza-style mischief at this soiree! 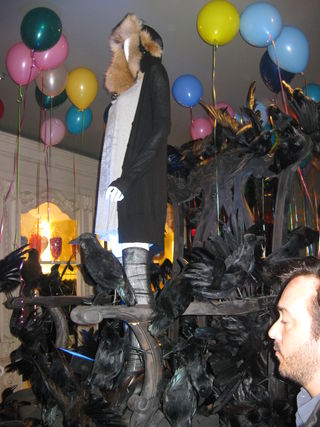 Taxidermed birds added a Hitchcockian touch. They also reminded me that I still need to find a pheasant for my anti-recession chic Thanksgiving dinner party! 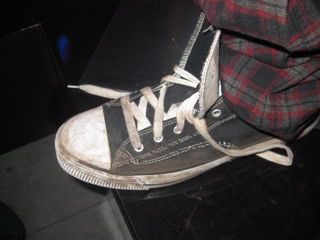 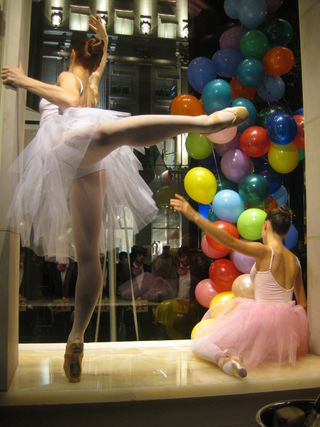 Ballerinas performed in the windows for the poor saps outside who couldn't get into the party. It was both sweet and malicious. 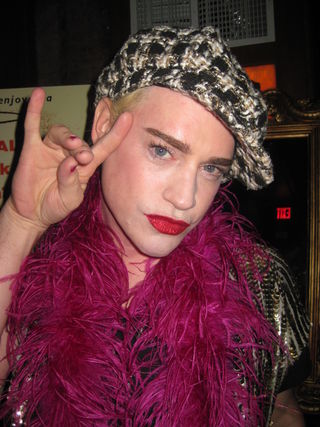 After collecting our gift bags (I got a bottle of Dirty English, a DE t-shirt, and a wallet with a long chain–so '90s!) we walked over to the one-year anniversary of the Supper Club (private club from London which I'm a member of) at the way-too-claustrophobic Haven. Sensing a lack of humility (the trend won't catch on with the B-list until the Styles of the Times runs a zeitgeisty piece on it) we high-tailed it over to the Kenzo Minami DJ gig.